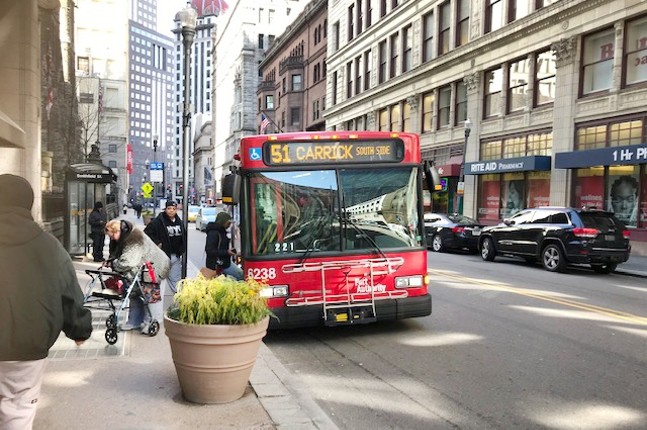 CP photo: Ryan Deto
A Port Authority bus in Downtown Pittsburgh
Port Authority riders have long been able to map their transit routes and track buses with their smartphones. Soon, customers will be able to pay for their fare on their phones, too.

The mobile ticketing system Port Authority plans to implement early next year will allow passengers to pay transit fares directly from their smartphones. Seconds after using a credit card, Apple Pay, or Google Pay to buy any ride option — a single-use ticket or a daily, weekly, monthly, or annual pass — from a mobile app, customers will be able to step onto any Port Authority bus and use that digital ticket.

“Paying for transit should be simple, convenient and equitable,” said Port Authority CEO Katharine Kelleman in a press release. “This system gives our customers yet another option to help make their riding experience even easier.”

Each bus will be outfitted with a phone validation machine once the program is implemented. The new payment method will take longer to reach the underground light rail system because the validation system will need adjustment before it can work underground, the Pittsburgh Post-Gazette reported.

The new system will also increase options for customers without smartphones, allowing them to print tickets at home or at a variety of retail locations around Allegheny County. According to a press release, the system will initially be based on current fare structure, but has the flexibility to accommodate new products and policies as they are implemented.

Port Authority’s Technology Committee approved on Wednesday a $2.85 million, three-year contract with Masabi LLC to implement the system. The full Port Authority Board will vote on the contract Friday. Some on the board have already voiced their approval of the measure.

"This is a step toward making public transit in Allegheny County easier to use and more convenient," said Port Authority Board member Jennifer Liptak in a press release. "More and more of our customers use smartphones when they ride with us, and being able to buy tickets on those devices will make riding public transit that much easier.”

The authority selected Masabi as its mobile ticketing vendor from 11 proposals received last fall. The mobile ticketing company has worked with partners in more than 50 locations worldwide to bring mobile payment options to transit in cities including Boston, Los Angeles, and London.