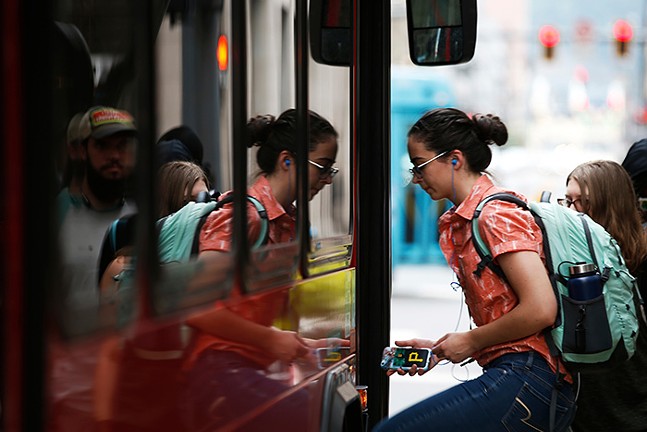 CP photo: Jared Wickerham
A rider entering a Port Authority bus
The Port Authority of Allegheny County proposed a slew of potential fare changes on March 18 that include a fare increase for many riders, but also addresses some equity concerns.

Port Authority CEO Katharine Kelleman presented the proposals to the board’s finance committee, who then recommended that the full board commence a 40-day public comment to allow for community input into the proposals.

According to the Pittsburgh Post-Gazette, Port Authority “believes the three-hour window of rides for one fare should address that equity issue by allowing unlimited transfers and other rides for no extra charge.” At the meeting, Port Authority presented research that shows of the 20% of riders that require transfers, 35% of them earn less than $25,000 a year.

Port Authority receives about 21% of its revenue in fares, and the agency expects to lose about $1 million a year if ConnectCard transfer fees are eliminated, but expects to make up for that loss with federal funding from the COVID-19 stimulus.

Transit advocates Pittsburghers for Public Transit has been pushing for free transfers for Port Authority riders, and they are appreciative of that inclusion in the fare proposals.

“We know it is a critical need,” says PPT director Laura Wiens.

But Wiens also noted the group has some concerns. She says if the point of the proposals was to address equity and ridership, then there are some gaps.

Wiens was particularly concerned that fare-capping wasn't included in the proposals. While the proposed ConnectCard fare jump increases the incentive to purchase weekly or monthly passes, Wiens says there are low-income users who don’t have enough money to spend the nearly $100 for a monthly pass. PPT suggests capping fares through ConnectCards so transit users are never charged more than the price of a monthly pass during a month-long period of rides, or more than the price of a weekly pass during a week-long period.

“There are people that don’t ever have enough money to purchase a pass, and that is what fare capping does. It means those people never pay more than a pass,” says Wiens.

PPT was also hoping for a proposal that would offer reduced or free fares to some low-income transit users. Wiens adds that the proposals didn’t include plans to improve accessibility to ConnectCards, which she believes is needed because the proposals to provide unlimited rides in a 3-hour window is only for ConnectCard users. Cash users will still have to pay $2.75 every time they ride the bus, light-rail, or incline.

In January, Port Authority announced a pilot program that would allow riders to pay the fare through an app on their smartphones. The pilot is not yet open to the public, but officials said it should be later this year.

On the ridership side, Wiens says the proposals should include bulk pass plans, so that large organizations and businesses can purchase passes for their employees as a means to encourage them to use public transit. She was also a bit concerned with what the effect raising fares might have on ridership. Port Authority already has one of the highest transit fares of any agency in the country, and Wiens says this is especially true as compared to Pittsburgh’s lower than average wages and incomes.

Recent Census data also indicates that low-income riders within the city of Pittsburgh are becoming increasingly reliant on public transit for commuting.

The proposed fare changes were part of a mandatory rule from the state that requires Pennsylvania transit agencies to review their fare policies every two years. If approved by the full Port Authority board, the public will be able to provide input on the proposals before going back to a vote by the board.