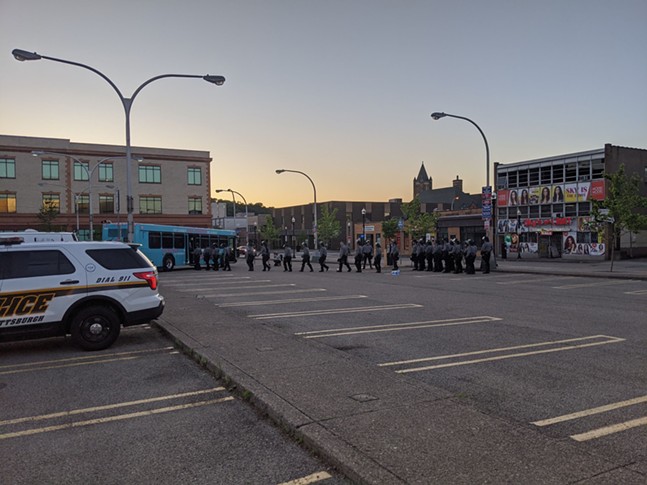 Photo: Shared with Pittsburgh City Paper with permission from Twitter user
In many cities across the country, bus drivers have shown solidarity with protesters by refusing to transport police or protesters being arrested or detained. In Minneapolis, multiple bus drivers refused to drive buses that were transporting police and arrested protesters. John Costa, president of the Amalgamated Transit Union (ATU), issued a statement saying that bus drivers transporting police or arrested protestors is a "misuse of public transit."

Over the past few days, Port Authority buses were used to transport police officers to the location of protests, as posted on Twitter, who shared photos of what appears to be state police loading onto a Port Authority bus, either before or after a peaceful protest in East Liberty.

"We don't want to be seen on either side, bringing people in to stop protesters or anything," said Palonis. "This way, the police put themselves in harm's way. We're not gonna get in harm's way."

Palonis said that there was one instance in which a Port Authority bus operator was used to transport the police, but that they will not do so moving forward.

"Our operators shouldn't have done it, but they did in the emergency. But moving forward, they will not do it anymore," he said.

On Saturday night, after the police deployed tear gas and rubber bullets, Port Authority announced it was suspending all service for the evening, in accordance with the Pittsburgh Department of Public Safety's 8:30 p.m. curfew. Some riders were angry at Port Authority for stranding protesters Downtown, and only to later learn Port Authority buses were transporting police officers to protests.

"We made it clear to them that our buses were for officer transport only and would not be used to transport anyone who might have been arrested or detained," says Brandolph.

Neither Brandolph or Palonis had an explanation for why the police had to use Port Authority buses instead of their own cars, trucks, and vans.

Advocacy group Pittsburghers For Public Transit (PPT) has been vocal in its opposition to this use of Port Authority vehicles. In a statement on its website, PPT calls for Port Authority to "re-evaluate its role in upholding the police state that is incarcerating and murdering our Black and Brown sisters and brothers."

"The outrage at a white supremacist system that is fueling protests across the country must be kept at the forefront of our work for transit equity," says PPT. "We are in the same fight: for a world where all people have the freedom to move, to be in public space without fear or threat."

In the statement, PPT also chided Port Authority for canceling service on Saturday night, saying that it "put riders at greater risk, not less." (At the time of the announcement, Port Authority tweeted, "We are putting the safety of our employees above all else.")

"We as an agency stand in solidarity with those peacefully exercising their first amendment rights, both in Pittsburgh and across the nation," said Brandolph. "We also stand against violence and destruction of property."