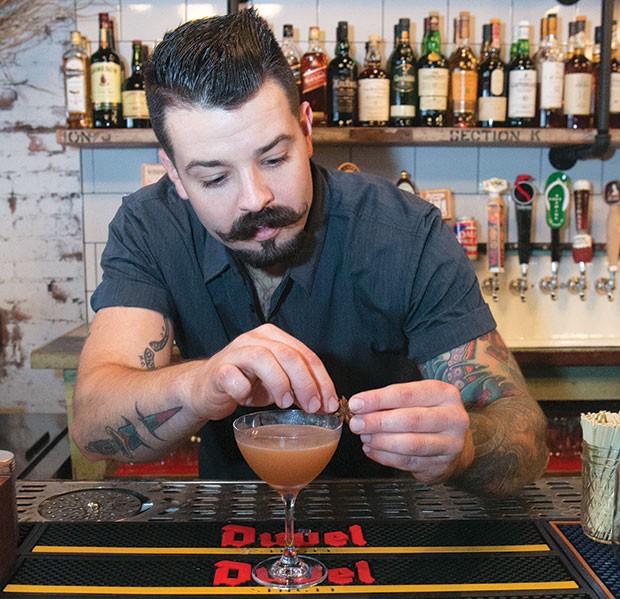 Richard DeShantz’s trifecta of Downtown restaurants, Meat & Potatoes, Butcher and the Rye and Täkō, has taught Pittsburgh to expect great things from behind the bar. Employing expert staffs, earning a James Beard semifinalist award for Outstanding Bar Program two years running, and creating excellently curated bar menus emphasizing each establishment’s individual character have all been standard procedure. When Keith Fuller, executive chef of the highly respected and creative but now-closed Root 174, and DeShantz, with partner Tolga Sevdik, teamed up for Pork & Beans, the city collectively started counting down. It opened in late October to the anticipation of foodies and drink enthusiasts alike.

The space is inviting, with bright colors and padded pink bar stools. A beer-can mosaic of a pig adorns one wall and a chain-link, barbed-wire-topped fence separates the dining area from the front bar. A few outdoor tables and in-vogue glassed garage doors pleasantly blend the street with the interior, which will be lovely for warmer days and happy hours.

Michael R. Anderson, Pork & Beans’ bar manager, has worked for the company’s other three establishments and intends to bring the same quality and focus to this new venture while keeping it playful. Each restaurant focuses on its own style, and Anderson is intent on Pork & Beans following suit. He pulled in Riley Snyder, formerly of Beerhead, to run the beer program after sitting at his bar and chatting with him after shifts. With 30 beers on draft and about 120 in bottles in formats ranging from 12 to 40 ounces, Pork & Beans has a laser focus on beer. Order a 40 and it’ll give you a brown bag to go with it. The restaurant also offers wine (in cans, too!), cocktails and nitro cold-brew coffee on draft, for a total of 36 taps.

The cocktails a friend and I quaffed all went down nicely, and the menu provides an excellent tableau for every palate. The Tennessee Ninja Mint Julep is an herbal riff on a classic, sweet and satisfying. It’s served in a beans can repurposed from its use in the house pork-and-beans dish. (The beans are made and canned in-house.) The house gin and tonic, the P&B G and T, utilizes a custom artisan tonic from Bittercube.

Since Pork & Beans is focusing on its beer program, I’ll be excited to return for dinner and take advantage of the beautiful wooden cooler-cabinet full of bombers, which are 22 oz. bottles of beer. These are to be ordered for the table, like one might split a bottle of wine. “We wanted to keep the wine list minimal to encourage sharing beer at the table,” says Anderson. If searching for the best of both worlds, order a beer cocktail. The Scotch Cherry was a creamy delight, smoothly blending Cherry Heering and Scotch ale.