Check in for smoked meats, well-dressed sandwiches and excellent pickles 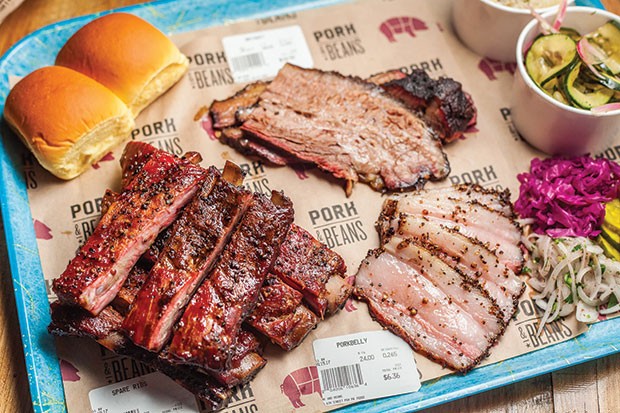 CP photo by Vanessa Song
Spare ribs, brisket and pork belly, with side of cucumber salad

Some chefs build a brand by replicating a concept in an ever-expanding territory. Not chef Richard DeShantz. His empire may be tiny, but it is mighty: All four of his full-service restaurants are within a bone’s throw of each other in Downtown’s Cultural District, and each features a setting as distinctive as its food. From the smoky chalkboards and mirrors at his flagship, Meat and Potatoes, to the twee Wes Anderson set piece that is Butcher and the Rye, to the phantasmagorical splendor of täkō, DeShantz creates not just dining, but full-immersion dining experiences.

His latest venture, Pork and Beans, is an upscale urban riff on Southern country barbecue, picking up where East Liberty’s Union Pig and Chicken left off. So yes, there’s barnwood, but not for barnwood’s sake. Paired with string lights in mason jars, a Mail Pouch mural and chipped, enameled metal tabletops, the weathered wood here evokes a place and a culture that haven’t been polished, modernized and updated beyond recognition — yet. Only a tall chain-link fence, topped by barbed wire (!), between the bar and main dining areas threw off the otherwise-appealing reduce-reuse-recycle vibe. We suppose there was some sort of indoors/outdoors concept at play, but there are really no positive associations with a fence like this.

The menu consists of straightforward, if carefully and cleverly prepared, versions of Southern food and smoked meats. Take the first item on the menu: fried-catfish sliders with American cheese on small, soft potato rolls. Sure, jalapeño tartar sauce and apple slaw are a bit outside the classic canon of Southern cuisine, but they’re not too foreign or fancified, either, and the catfish and dressings were exemplary. DeShantz can’t resist a few extravagant flourishes here and there, such as foie gras on a fried-chicken sandwich. But picnic food should be familiar and inviting, and for the most part, this was.

The sandwiches, especially, stood out. The hot dog was made in-house, split and grilled, then topped with cheese, brisket, ranch slaw and fried jalapeños. It was massive, but it wasn’t a mess, in part because the frank was big and flavorful. In truth, had it been much more simply dressed, it might have been a bit much, all juice and spices and meat. But all the toppings’ flavors and textures worked together to create both variety and harmony. This was close to the perfect wiener.

Like wieners, what we call country-fried steak originated with German immigrants in Texas, who adapted their home recipes for schnitzel to locally plentiful beef. It is therefore fitting that Pork and Beans offers a pork schnitzel sandwich. Jason thought the meat was too thick and the breading a bit too dark in spots, but Angelique liked the juicy, crunchy-coated cutlet just fine. She would have skipped the undistinguished soft roll and even the fried egg on top because the tangy radicchio slaw and mustard sauce provided all the accompaniment the schnitzel required.

A pulled-pork sandwich, topped with more radicchio and jalapeños, plus super-crisp housemade pickles, was far above and beyond the waterlogged product purveyed by most Northern barbecuers. This pork was tender, but short of soft, and had plenty of tasty charred exterior mixed in without ever adding toughness.

We love the idea of the “deviled egg of the day,” and we really loved the one we got, carbonara. Bacon bits, a parmesan wafer and pea puree perfectly, and addictively, melded with the creamy whipped yolk to evoke the luscious pasta dish.

Hoppin’ John, the New Year’s good-luck rice-and-beans dish of the Carolinas, was on the special menu. It was authentically prepared, not with black-eyed peas, but with Sea Island red peas, which were small, tender-firm and much more delicious, especially when mixed with bits of pork. The rice, Carolina Gold, was also a cut above. Topped with zingy chives, this was a deliciously auspicious start for the year.

Finally, we tried brisket, one of Pork and Beans’ daily a la carte smoked meats. The texture was extraordinary, perhaps perfect, with juicy, ultra-tender meat and melting, succulent fat, comparable to what we’ve had at Texas Hill Country barbecues. But salt was the leading flavor, with smoke a distant second. Too much salt on the crust could be excused as a matter of taste, but the paucity of smoke was hard to square with the hardwood stacked, almost to the ceiling, against one wall of the dining room, let alone with Pork and Beans’ motto: “Where There’s Smoke, There’s Swine.”

Pork and Beans gives Northerners a taste of the art — and the mythology — of Southern barbecue. If it occasionally fell a bit short, it also occasionally made our barbecue-craving hearts soar.