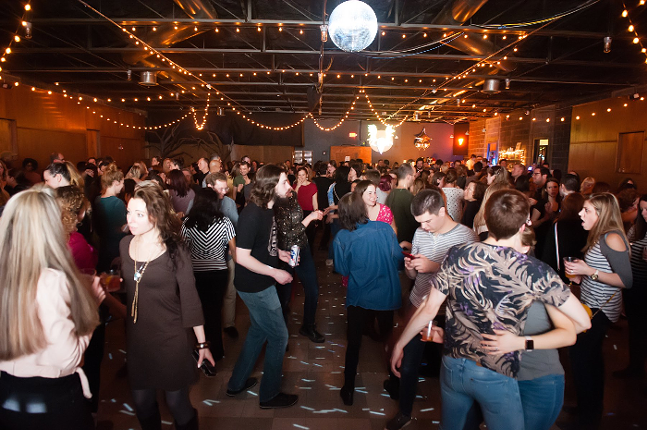 Photo: courtesy of Porter Loves | Photography
In Bed by Ten dance party at Spirit in 2018
The popular Pittsburgh party that promises dancers will be home at a decent hour has returned after a pandemic break. In Bed by Ten events return after over a year of in-person absence and there are five outdoor events scheduled for a summer tour across the city. The dance parties are all at different locations and will include live DJs and local charities.

In Bed by Ten was created in 2015 by local artist and DJ Matt Buchholz and used to be hosted inside Spirit in Lawrenceville. But this year, it’s heading in a different direction for its reopening.

Buchholz surveyed In Bed by Ten fans about where they would feel most comfortable when the events made their return, and the results showed that the majority were interested in outdoor events for COVID-19 safety precautions.

“That led me to reach out to the Pittsburgh Downtown Partnership and their Allegheny Overlook space, as well as the SouthSide Works Music on the Mon series,” Buchholz said in a press release.

Aside from outdoor venues at SouthSide Works and the Allegheny Overlook, other locations featured in the summer tour include local breweries in Garfield, Spring Hill, and Bloomfield. Below are more details:

In Bed by Ten begins its summer tour with a throwback night featuring DJ EZ Lou, who will play only the best of the 1980s. The event is free to the public, but guests can purchase $5 wristbands that give them access to beer and wine from Brew Gentlemen. The wristband proceeds go directly to local charity 412 Food Rescue. Food vendors Blue Sparrow Food Truck and Good Eats will be available throughout the event.

Trace Brewing in Bloomfield hosts In Bed by Ten with DJ sets by MB and Formosa of Jellyfish in the brewery’s courtyard. Trace Brewing will serve craft beer and cocktails all night alongside food from Stuntpig. Although the event is free, donations are being accepted to support LGBTQ+ organization True T Pittsburgh, which celebrates Queer People of Color through creative art, entertainment, resource sharing, and activism.

In Bed by Ten’s summer tour makes its midway mark at the outdoor patio at Two Frays Brewing in Garfield. The event features craft drinks from Pittsburgh’s new brewery and DJ sets from MB and INEZ. This event will accept donations for local arts organization BOOM Concepts.

The final stop of the In Bed by Ten summer tour is at SouthSide Works before the screening of Flashdance in SouthSide Works’ Music on the Mon series. The dance event features electrifying sets from DJs MB and Ricky Molsen from Jellyfish.