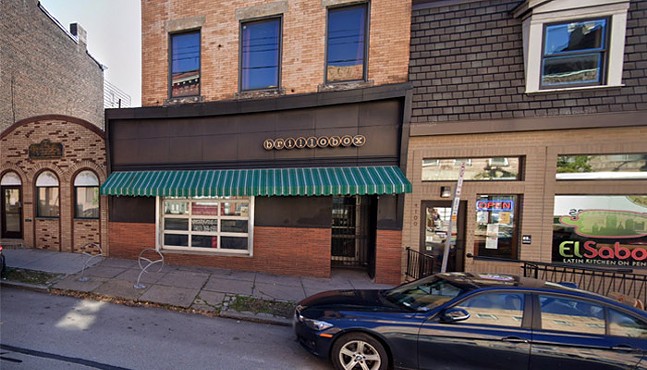 Photo: ©Google Maps
Brillobox on Penn Avenue in Bloomfield
The coronavirus shutdowns and economic recession led many local Pittsburgh institutions to permanently close. The Original Hot Dog Shop in Oakland closed up shop permanently during the pandemic, as did longtime entertainment spot Rex Theater in the South Side. Last August, the popular bar and music venue Brillobox also announced that it was closing after 15 years of operation.

But after some hints at a return, the Bloomfield bar announced on social media on Tue., Aug. 10 that it plans to reopen in the fall of 2021.

On the official Brillobox Facebook account, the bar posted "Brillobox plans to reopen this fall. We will take whatever measures to keep our employees and friends safe. Thank you for being patient. See ya soon."
This announcement was met with glee from Pittsburghers far and wide. Comments filled Brillobox's social media with people showing excitement for the bar to reopen. Brillobox had been a staple of the Bloomfield bar scene for years, with its funky decorations — including a giant shark statue — and impressive beer and cocktail list. Upstairs, a small venue hosted dance parties, bands, comedians, and a lot of small acts.

On Aug. 5, the Pittsburgh Business Times reported that Brillobox ownership recently turned down offers to sell the venue. Earlier this year in April, Brillobox ran a vague social media post reading "Maybe?" which many interpreted that the bar might reopen.

Brillobox is listed to be awarded $245,000 through the Shuttered Venue Operators Grant program administered by the Small Business Administration, according to the Business Times.