"I love taking things out of the box and remolding them." 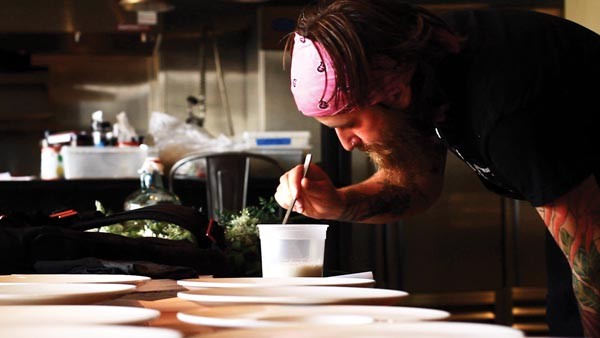 "We were always so fucking shit-faced while we were here," he says. "We had a lot of fun."

Now a nomadic chef with a pop-up restaurant, Crux, Baltzley has returned to the city to host unique, thematic dinners at Root 174, in Regent Square.

Their first, a 12-course meal to be served alongside a showing of the 2001 romantic comedy Amélie (with courses timed to key scenes) is scheduled for Monday and sold out. The next, to be held Nov. 5, and titled "Waste not, Want not," features "the food most chefs send to the bin," including squash guts, veal sweetbreads and head cheese. (Reservations were still being accepted as of press time, at www.cruxrestaurant.com.) More dinners are also being planned that will feature guest chefs from Bar Marco and Cure.

Crux started out in Chicago, where Baltzley is planning to open a brick-and-mortar restaurant in 2014. In the meantime, he is working with chefs there, in Portland, Maine; New York City; and now Pittsburgh to throw these one-off, one-of-a-kind dinners.

The dishes — there have been more than 500 unique ones in the 18 months that these meals have been served — are collaborations: good cooks working together on the same plates.

"I believe in the collective style of running a business, where everyone has an equal vote, equal say in what happens," Baltzley says. "It keeps everyone's fucking ego in check."

And it produces the best food, he says.

For Keith Fuller, chef and owner of Root 174, the dinners are about working with a good friend and producing a memorable meal.

"I love art concepts," Fuller says. "I love taking things out of the box and remolding them."

At $150 a head (without the booze), the dinners aren't cheap. But the cooks note that neither is the meal prep. The experience, both for them and for the people they serve, is the true aim.

"I'm a horrible artist; I can't paint. I can do food," Fuller says. "This is another element of doing fun things."