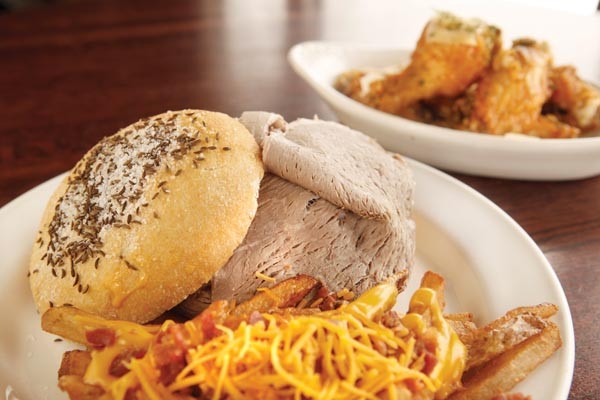 Now, more than ever before, decent food is within reach of every restaurant, bar and take-out counter, be it ever so humble. Between what comes in on the truck from the food service, what untrained cooks can pick up from cable food shows and the generally evolved culture of food in America, there's a lot less excuse for mediocre meals, carelessly assembled.

This increased sophistication about food has also raised diners' expectations and made it harder for restaurants to stand out. This is true even for bars, whose stock in trade has traditionally been their taps and TV screens; food, usually an assortment of burgers and wings, used to be just ballast. In that environment, just a few well-turned-out entrees would turn our heads. These days, what does it take for a place to get noticed?

We found ourselves pondering this question after a highly satisfying meal at Poor Richard's Wexford Alehouse, a small bar and restaurant tucked inconspicuously among the car dealerships of Route 19. Driving out, we pinned our hopes on the notion that proprietors who bothered to lay in a well-curated selection of beer would demonstrate equal discernment in the kitchen.

And we were rewarded. The first thing Jason noticed was a roast-beef sandwich on weck, which is a Buffalo-area classic: house-roasted beef served with jus on kimmelweck, a Germanic roll with caraway seeds. Unlike Buffalo hot sauce, roast beef on weck is not well known outside the city of its invention, but Jason had sniffed it out and was excited to try Poor Richard's version. The beef was quite good — tender and hearty — and the roll was extraordinary. Its texture was unique: fairly soft, but substantial, with a crust that was almost delicately crackly. Best of all, the caraway offered a sweet, faintly spicy, anise note to the sandwich, while a generous dusting of sea salt boosted savor without forcing the beef or its jus to carry all the salt. We'd love to see this sandwich on more local menus, but only if the quality of the bun holds up.

The bun on our burger was less distinguished, although we thought we detected a hint of egg or potato. The patty itself was nicely formed: a bit loose, rather than dense, and not overwhelmingly large. However, cooked to medium it was a touch dry, probably not enough to matter had it been loaded with toppings, but we tried ours straight up, and wished it were juicier.

The town on Lake Erie made another cameo in Buffalo mac-and-cheese, mixed with hot sauce and topped with cubed chicken bits and melted bleu and provolone cheeses. The fact that the sauce was combined with the cheesy roux assured that every curly cavatappi was thoroughly coated in a heady mixture of creaminess and peppery spice; the chicken added substance and the bleu cheese provided little pockets of cool tang that briefly relieved the tongue. This dish was assertive, addictive and supremely satisfying, and Angelique still can't stop thinking about it.

Buffalo fries, offered on their own or as a side, echoed the delicious fire of the mac-and-cheese, but with a more modest ingredient list: just good, pub-style fries with crumbled bleu, plenty of hot sauce and a side of dressing. That's not to say that just inhaling near the basket wasn't enough to clear Jason's sinuses. Thanks to the hearty fries, the sauce wasn't punishing, but it's definitely not for the faint of palate.

Angelique, inspired by the pub vibe, decided to dine British-style with fish and chips. The fried cod had a lovely, smooth, silky texture within an outstandingly crispy, pastry-like coating. The waffle fries she substituted for regular were also well balanced between soft interiors and crunchy, lightly seasoned exteriors.

Garlic-parmesan wings can be mild to a fault, but Poor Richard's were terrific. We loved seeing actual melted shreds of cheese instead of pulverized, processed crumbs, and lots of minced garlic promised plenty of pungent, zingy flavor. Alas, the wings were hardly salted at all, which kept the flavors from really blooming. Nonetheless, with crispy skins and a high-quality sauce, they stood out.

Ultimately, Poor Richard's itself stood out. One reason was consistency: Everything we ordered was very good. Another was details like the real, melted parmesan over the wings, which indicated that someone had really spent time thinking about what would make each dish as good as it could be within the conventions of a sports-bar menu and its constraints of price and style. We love trying new foods and new cuisines, but there's also great satisfaction in having top-notch versions of what is so often dismissed as "pub grub."