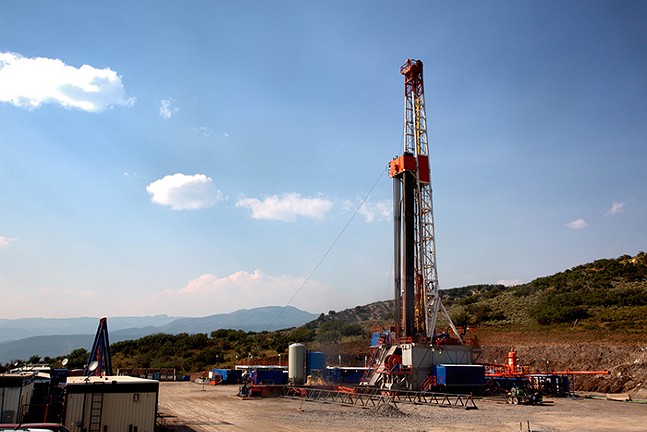 Politically speaking, the discussion around fracking in Pennsylvania lacks nuance. Fracking is the process of extracting natural gas from underground deposits, and it's been ongoing on a large scale throughout much of Pennsylvania for the last 10-15 years.

Debates over fracking usually end in people saying fracking is a necessary job creator and must be left to its own devices, or with environmentally-minded people saying they want to end it completely. Most polls frame it this way too, usually just with a simple question like, “Do you favor or oppose fracking?” (The latest poll showed that 52% of Pennsylvanians oppose it, by the way.)

The biggest factor in flattening the fracking discussion is President Donald Trump and Republicans, who have consistently claimed that all Democrats, including presidential nominee Joe Biden, want to ban fracking. There are some progressive Democrats who do want to ban fracking, saying the environmental risks are too high and the job creation is less stellar than advertised, but Biden is not one of them.

And it’s the middle ground, at least according to a new poll from an environmental group, where the most support lies. A poll commissioned by Climate Power 2020 and the League of Conservation Voters asked Pennsylvania voters a myriad of questions concerning fracking, and responses show that significant majorities of voters support regulations on fracking, as well as support a transition away from fracking and towards renewable energy.

The poll, conducted from Aug. 13-19 among 801 registered voters in Pennsylvania, shows that 66% of voters support placing stronger regulations on oil and gas fracking, compared to 23% of voters that oppose. When just looking at the Pittsburgh market, 64% support stronger regulations and 26% oppose. The greater Pittsburgh area, which is home to thousands of fracking wells, has many politicians, both Democratic and Republican, who are allies of the fracking industry.

Katie Blume, political director for Conservation Voters of Pennsylvania, says the poll shows that a shift is occurring among voters, where reigning in fracking is becoming more popular than not.

“I think there is a shift. I think after the Attorney General investigation, people’s eyes have been open,” she says, referring to Pennsylvania Attorney General Josh Shapiro’s grand jury indictment against fracking companies who have polluted the state.

Additionally, when asked about support for “phasing out oil and gas fracking by the year 2050 and requiring utilities to use renewable energy like wind and solar instead,” which is essentially the same as Biden’s plan and the plan endorsed by some Western Pennsylvania Democrats like Rep. Mike Doyle, 62% of voters support that measure and 61% in the Pittsburgh market.

“Pennsylvania has been an extractive state, with lumber, oil, natural gas, etc. We can’t afford to have a bust again,” says Blume. “But we can transition to clean energy that is on a federal platform, or at least Biden’s platform. We want [fossil-fuel workers] to put food on the table, but we have to think toward the future.”

Blume believes that attitudes about fracking are shifting in the state and region because fracking has been linked to increased pollution and methane emissions, a powerful climate-change contributor.

And in terms of fracking jobs, the market, not regulations, has become an adversary in the last year. The local fracking industry has shed hundreds of jobs, and large companies have started to divest from the region. (At the same time, clean energy jobs like wind and solar grew by nearly 7,800 in 2017-19 in Pennsylvania. That’s a growth rate of 8.7% and much higher than Pennsylvania’s overall growth rate of 1.9%.)

The poll also notes that voters are not believing some of the attacks levied against Biden and Democrats. On the attack that claims Biden will ban fracking and eliminate 600,000 jobs (there are only about 20,000-50,000 fracking jobs in Pa.), 34% of voters say that claim is not believable at all, while 30% believe it.

President Trump will be visiting Western Pennsylvania tomorrow, when he stops by Latrobe in Westmoreland County.