Political Spin: No Ravenstahl puts a new twist on the mayoral primary and the city's future

"He did the city a good turn by dropping out." 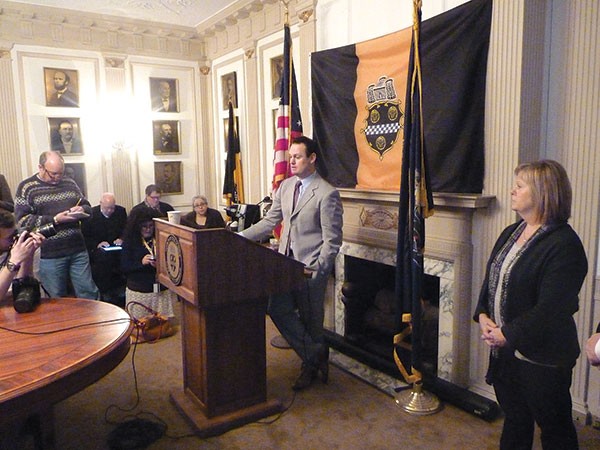 Photo by Charlie Deitch
Mayor Luke Ravenstahl announced last week that he was ending his run for re-election.

When Mayor Luke Ravenstahl took the podium on March 1, he was able to resolve at least one question swirling around him: his political future.

Ravenstahl, flanked by his parents, told reporters: "I'm proud of the things I was able to achieve. ... This success, however, comes at a cost." He continued, "The grueling demands of this office are difficult to describe, the sacrifice significant."

With that, Ravenstahl dropped a bid for re-election that had launched just 11 days prior. He insisted the decision wasn't based on a federal investigation into the police bureau, or because he didn't think he could win. In fact, Ravenstahl told reporters, "I'm more confident" than ever that victory was in grasp.

But while Ravenstahl put to rest speculation about his election prospects, he opened the door to more questions.

Would he run again someday? (He didn't rule it out.) What would he do with the rest of his term? ("It may allow us to do some things that are perhaps bolder than what somebody who has to run for re-election might consider. ... I'm not going to promise you anything.") What would become of his nearly $1 million campaign war chest? (He'll speak with his donors and decide the "best course of action" for those dollars.) Would his base support the other two declared candidates, City Controller Michael Lamb or City Councilor Bill Peduto? Or would Ravenstahl back some other contender? (Ravenstahl said he did back someone, but hadn't spoken with the mystery candidate.)

In the wake of Ravenstahl's announcement, it seems likely that at least one more name will appear on the May primary ballot. But his departure changes the race in other ways as well. It "will result in an election about the issues instead of the behavior of the incumbent mayor," says Joe Mistick, a political analyst and law professor at Duquesne University. "To that extent, he did the city a good turn by dropping out."

Minutes after Ravenstahl's press conference ended, names of potential new candidates began popping up: former Allegheny County Executive (and former city councilor) Dan Onorato; city council President Darlene Harris; former state Auditor General Jack Wagner; state Sen. Jim Ferlo. By the weekend after Ravenstahl's announcement, Harris had already begun circulating nominating petitions; Wagner, who was previously considering running as an independent in the November election, has publicly acknowledged he might mount a primary run instead. Ferlo wouldn't rule it out. ("There's a lot of fluidity here," he says. "We had a historical and major announcement. People need time to reflect on it.")

Any new entrant to the race faces two obvious challenges: time and money.

The deadline has already passed for candidates to file for the Democratic Party endorsement. With Ravenstahl dropping out, and Peduto's earlier decision not to seek the endorsement at all, Lamb is the sole candidate eligible to receive it.

Ferlo has already called for the party to refrain from making an endorsement at all. "If there were multiple candidates, there would be a seismic shift in the election," he says. Given how much the field has changed, he says, party leaders sitting this race out could lead to "a more principled, grassroots election."

But party bylaws make little allowance for such a move. "I participated in the process because I respect the rules," says Lamb. "The rules require an endorsement and I will be the Democratic-endorsed candidate."

Meanwhile, other deadlines are fast approaching. The deadline for seeking the influential Allegheny County Labor Council endorsement, for example, comes Thu., March 9: By press time, council head Jack Shea said Peduto and Lamb were the only mayoral candidates seeking it.

Under citywide campaign-finance regulations that apply, for the first time, to this year's mayoral campaign, candidates can receive only $2,000 from an individual donor for use in the primary, or $4,000 from any given political committee. That means raising money the hard way in a race where Peduto, for one, had $261,000 in hand at the start of the year. And although Ravenstahl boasted of having nearly $1 million to fund his own campaign, the contribution limits prevent him from bestowing a massive overnight infusion of cash.

Those rules also limit how much new entrants can contribute from their own existing accounts. The rules require a candidate seeking city office to set up a committee for that office. If a politician already has committees set up for other races, cash transfers from those campaigns are also limited by the donation cap. So although Wagner, for example, had more than $371,000 left over from his auditor-general campaign at the end of last year, the rules permit him to use only $4,000 of it by the primary. (Ferlo and Harris had $26,765 and $28,045 respectively.)

That may not be the end of the story, however. Nothing in city law prohibits independent expenditures of money: Ravenstahl could, for example, set up a committee to spend untold sums attacking Lamb and Peduto. And the law's enforceability has not been tested: Lamb and Peduto are already at odds on the interpretation of the law, since Lamb rolled his city controller's account into his mayoral effort. Peduto has asked the county Board of Elections to rule on such activity, and he says if it declines to do so, he'll bring his challenge to Common Pleas Court.

"You can try playing the games with this, but that just shows you are trying to be sneaky," says Peduto, council's driving force on the legislation. "The intent of this law was made clear when council debated it."

Although Ravenstahl is not running, the election might partly be a referendum on him, anyway. Especially if either Lamb or Peduto, who've criticized him sharply over the past few weeks, wins the primary.

Some, like Allegheny County Executive Rich Fitzgerald, a staunch Peduto ally, think Ravenstahl's withdrawal gives Peduto momentum. "I've gotten a lot of calls from a lot of folks who were previously supporting Luke," Fitzgerald says. Peduto was already leading the money race — Lamb had $212,000 in his account by the end of 2012, $62,000 of which he'd raised while running for controller. Peduto has also garnered some early endorsements from labor. "I think people see Bill as a front-runner," Fitzgerald says.

Lamb, for his part, calls Ravenstahl's withdrawal an "opportunity to provide new leadership to this city and to deliver a government where the taxpayers can expect more in every neighborhood."

"Our campaign is moving forward and we look forward to debating anyone on the issues," Lamb says.

Pundits will also be watching to see how Ravenstahl's legacy affects other candidates. His backing would come with baggage that Mistick, the Duquesne professor, calls "a double-edged sword."

Ravenstahl rose to national prominence after taking the mayor's office in 2006 when the death of Mayor Bob O'Connor put the then-city council president in the limelight at age 26. He won a special election to hold onto the seat, and won another 2009 race to serve out his current four-year term. In his March 1 address, he touted his accomplishments: balancing city budgets, and helping to launch the Pittsburgh Promise scholarship fund for students of city schools. As for regrets, he said, "I'm not going to get into regrets. We all have regrets in our life."

But Ravenstahl has also generated his share of face-palm moments: trips to the Super Bowl and luxury hotels in New York City; paying country-club dues with campaign donations; crashing a Tiger Woods appearance; and one of most high-profile gaffes: celebrating his birthday at a ski resort during a massive snowstorm in 2010. And for the past month, his administration has been embroiled in public controversy again: the revelation of unauthorized accounts at a police credit union; the forced resignation of police chief Nate Harper; a federal investigation into the police bureau; and criticism over Ravenstahl's after-hours use of a security detail.

Ravenstahl has vehemently denied any wrongdoing. "Many will speculate about my motives and conclude that the investigation is my reason for [withdrawing] today," Ravenstahl told reporters at the press conference. "It's not. I've done nothing wrong. That will be proven over time."

For now, though, says Mistick, "I wouldn't want his endorsement. When you have a public official who steps down because of a cloud, folks don't want to be associated with it."