Larry Grumet won't deny the quality of his family's health-insurance coverage. What he takes issue with is its affordability.

For much of the past 10 years, the 63-year-old Squirrel Hill resident has seen his family's premiums soar, even while his insurer's profits have remained high. But with more increases scheduled to hit his wallet, as well as those of hundreds of thousands of other Pennsylvanians, Grumet says enough is enough.

"I am a disgruntled Highmark payer," says Grumet, a retired banker. "I'm upset about the frequency of the rate hikes."

Since 2001, in fact, the premium for the plan that covers Grumet's self-insured wife and daughter has been increased six times, while it's decreased just once (Grumet himself used to have the same plan, but for roughly the past five years he has been covered by a Highmark Medicare-supplement program). Twice, rates rose more than 15 percent from the previous year.

The latest hike, which is set to take effect Oct. 1 was modest: Highmark sought to raise rates by 8.5 percent, but the state's Insurance Department -- which regulates insurance rates -- approved a hike of just 2.2 percent. Even so, Grumet says, insuring his wife and daughter now costs just under $900 a month, And Highmark isn't finished: Currently, the firm is requesting an 8.9 percent increase to the plan that covers Grumet's wife and daughter -- its second such request since May.

In fact, as of Aug. 22, Highmark had applied for rate increases affecting more than 230,000 residents statewide. If the state approves, it would raise costs on consumers by $28 million overall.

"The cost of this is getting obscene," Grumet says. "Anyone who says health insurance is affordable in Pennsylvania is mistaken."

And, say some industry critics, it's time for the state to redouble its oversight of health-insurance giants. Especially for the self-insured, who have to negotiate with insurers without an employer's help.

Pennsylvania already tries to prevent insurance companies from unjustly picking consumers' pockets. In order to meet the state Insurance Department's approval, rate increases "must be actuarially justified based on income and expense data," says department press secretary Rosanne Placey. "And they must meet the standards set in law that they are not excessive, inadequate or unfairly discriminatory."

Placey says the department predicts a company's future earnings by reviewing past experiences with certain insurance plans. On average, she says, about half of the rate applications are initially rejected -- though companies frequently return with more modest requests.

Typically, the state doesn't monitor changes made to health-insurance plans provided through employers, who can act as a watchdog for rate hikes and seek out cheaper coverage elsewhere. But, "Individuals don't have anybody but us looking at the rate increases," Placey says.

Some argue that consumers need more help. State Rep. John Yudichak (D-Luzerne), introduced a piece of legislation more than a year ago that would force the state to do just that.

Yudichak's bill, which he says has gone through two hearings in the Insurance Committee and could potentially meet its first vote in the state House in September, seeks to establish an Office of the Consumer Advocate for Health Insurance.

"[The bill] can be a resource for the consumer," says Yudichak, who introduced the bill with 40 co-sponsors, including seven Republicans. Setting up an office to represent the consumers' interests, he says, "can be a tremendous asset in cutting through the complexities in the health-care industry.

"We need an independent voice for the health-care consumers," Yudichak adds.

"The [Insurance Department] doesn't have the power to do what they need to do to control health-insurance rates," agrees Marc Stier, state director of Health Care for America Now, a national grassroots organization which advocates for affordable health care. Part of the problem, he says, is that "The health-insurance industry is extremely powerful politically." When Gov. Ed Rendell held an inauguration party to celebrate his 2006 re-election, for example, Highmark and a subsidiary contributed a total of $50,000 to cover its costs. Another $50,000 was kicked in by Independence Blue Cross, a Philadelphia-based insurer with whom Highmark is pursuing a merger.

In the past, Yudichak says, insurance commissioners have sometimes been hired directly from the industry itself. Other times, the revolving door has turned the other way, with insurance companies hiring industry-friendly commissioners straight out of the department. Thus, he says, a commissioner is constantly subject to temptation. As a result, his bill would bar any employee of the consumer-advocate office from working in the insurance business for two years after they leave the office.

Grumet, not surprisingly, supports the bill. With such an advocate in place, he says, "If there's BS, we're going to know about it."

But Rendell spokesperson Chuck Ardo says a consumer-advocate office would be redundant. Protecting consumers "is part of [the Insurance Department's] primary responsibility," he says, and commissioner Ario has "a national reputation as a defender of consumer rights."

From 2001-2004, Ario served as the chair of the Market Regulation and Consumer Affairs Committee for the National Association of Insurance Commissioners.

For its part, Highmark says it doesn't see the need for another watchdog. "The insurance commissioner has the responsibility to represent consumers' interests," says Highmark spokesperson Michael Weinstein. "Our concern [about Yudichak's bill] is that we would be creating redundancies and duplication within the government."

Weinstein says the company is sympathetic to customers like Grumet. "We recognize any increase is challenging" for consumers, he says. "It's a critical issue." But the company isn't trying to gouge customers, he says: "We're seeing health-care costs increase nationally at 8, 9, 10 percent a year. The main reason for the [rate] increases has to do with higher costs associated with these programs."

Weinstein also says Highmark already does everything it can to lessen the impact of increases. For example, Weinstein points to Highmark's Special Care program. The program, intended for families and individuals without group health insurance who earn too much money to qualify for Medicaid, is currently seeking an 8.9 percent increase. But if it weren't for subsidies offered by Highmark, Weinstein says, the requested rate increase could be as much as 20 percent higher.

Consumer advocates are skeptical. "The fundamental business model of insurance has to change," says Stier, of Health Care for America Now.

That seems unlikely, at least in the short term. The trend is for insurance giants to get even bigger. If the state Insurance Department approves Highmark's merger with Independence Blue Cross, for example, it will create the third-largest insurer in the United States. A merged Highmark/Independence will control more than 50 percent of the state's market.

In the meantime, Stier says, insurers are partly to blame for the spiraling costs they complain about. He says that many customers can't afford insurance, or can't get it because of pre-existing medical conditions; as a result, they wait longer to seek treatment and often end up visiting emergency rooms, where care is more expensive. Insurers are "part of the problem," Stier says. "But they don't see that." Instead, he contends, "The model now is to restrict care and restrict coverage."

Stier says his solution to the health-insurance crisis would be to require people to pay on the basis of their income, "not what's most profitable."

Until that happens, he says, "All [insurance-rate] increases are questionable." 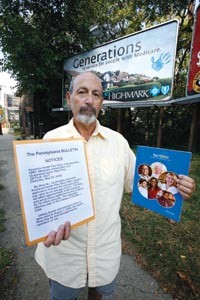