CP photo: Jared Wickerham
Crowd dispersing on Centre Avenue after canisters of tear gas or tear smoke fired into crowd
At around 7 p.m. on Monday night, about 100 protesters were met by police officers in East Liberty. After being told multiple times that they were part of an unlawful assembly, police fired rubber bullets or bean bags and then smoke and chemical munitions at the crowd, at which most of the protesters dispersed.

All of this happened more than an hour before Pittsburgh’s officially declared curfew at 8:30 p.m.

Some protesters stayed, starting to throw water bottles and what appeared to be rocks at the police, who had formed a line and continued to advance, then eventually pushed out the crowd of protesters and journalists from Centre Avenue.


Protestors were chanting when the police came and started throwing tear gas. Not sure what made them do that. East Liberty #PittsburghProtest. pic.twitter.com/qmSxYdV9ep

Videos on social media corroborate this sequence of events. TribLive reported that rocks began to fly at police first, who responded with what observers believed to be tear gas, but police say was smoke. However, video and photos show that a rubber bullet was fired first at the protester closest to the police line. Then, protesters responded by throwing objects and police fired smoke canisters. Pittsburgh Post-Gazette reporter Andrew Goldstein reported that protesters started to throw objects at the police after some kind of bang went off.

Some protesters treated their faces with milk and other liquids to counter the effects of the canisters.

At around 8 p.m., CP News Editor Ryan Deto witnessed at least four people that were arrested by police. Protesters didn’t confront the police line before the rubber bullets and smoke were fired. One protester got within 20 feet of the police line but did not get closer, then was shot and hit with a rubber bullet from that distance.


Centre between Negley and Euclid is closed down by police. Looks like they have made at least 2 arrests. pic.twitter.com/lrlIx1cMxK

In a tweet, Pittsburgh Public Safety Department says that a "small group broke off from peaceful march [and] broke windows and threw items at police at Centre and Negley. Officers issued several orders to disperse. Group ignored. Police used smoke and then gas to disperse group."

However, it appears the police fired a rubber bullet first at the crowds. The crowd of protesters also told a man who broke some windows on Penn Avenue not to do so, and it appears he was not part of the protest group, and he didn't join people in marching down Centre Avenue. During a press conference, Pittsburgh Police officials say that protesters threw rocks and other objects at police officers before they issues orders to disperse.

Pittsburgh Mayor Bill Peduto said that it was "smoke, not gas" that was used to disperse the crowd. CP saw a man whose entire face was red and tears falling down his face after the canisters were fired near the protesters.


The 100 or so protesters who were confronted by police were initially part of a larger protest that marched through East Liberty for more than three hours, where police officers were seen clearing the streets so that the protesters could march without disruption. That crowd included more than 1,000, who shared passionate speeches and rally cries and were left alone by police. 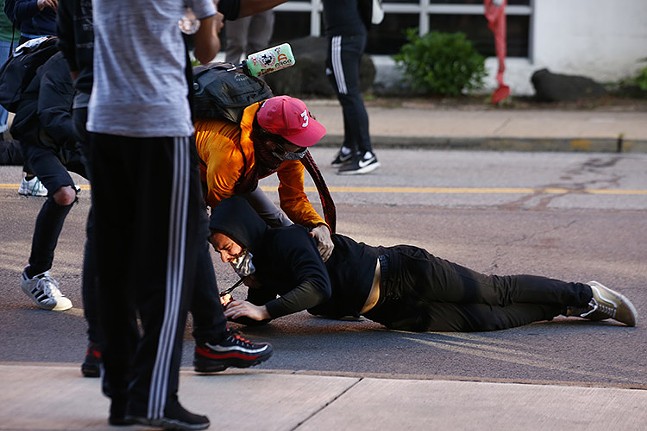 CP photo: Jared Wickerham
Man hit by a rubber bullet or bean bag on Centre Avenue
This marked the third consecutive day of demonstrations in Pittsburgh in honor of George Floyd, a Black man killed last week by a Minneapolis Police officer. Today’s protest was large but had fewer than Saturday’s, which brought more than 3,000 people Downtown. After organizers say they told demonstrators to go home on Saturday, property damage started with the destruction and burning of an unoccupied police vehicle. A second empty police vehicle was also set ablaze, and then about 100 protesters traveled Downtown. While Downtown, some of those protesters on Saturday smashed windows at several businesses and looted others. Protesters then were also met with pellets and tear gas, and SWAT teams were called. 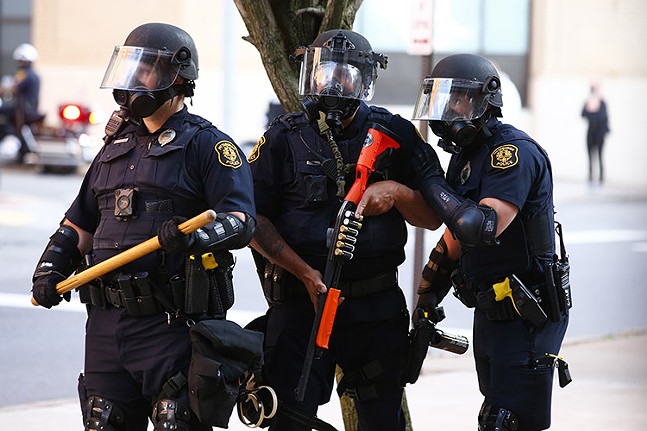 CP photo: Jared Wickerham
Pittsburgh Police officers in riot gear
On Monday, however, there were far fewer incidents of property damage and there were no instances of looting. Nor were there instances of violence carried out by protesters until police fired rubber bullets or bean bags and tear gas at the group on Centre Avenue in East Liberty. The doors and windows at Dollar Bank and Villa shoe store appear to be the only properties damaged. Some area businesses still took the precaution of closing early and boarding up windows, such as CVS Pharmacy and Whole Foods.

The three-hour long marched snaked through East Liberty and included pleas for participants to vote and to pressure their public officials to change the state’s use-of-force laws. At the beginning of the march, a woman shouted into the megaphone, “If you touch a Black business, I will personally fuck you up.” 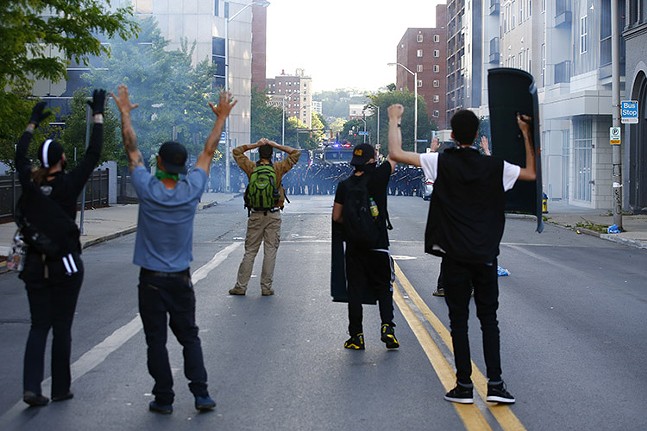 CP photo: Jared Wickerham
Group of protesters during confrontation on Centre Avenue.
After the three-hour march concluded, several protest organizers called on people to disperse and return home. That is when a group of about 100 continued to march from Target and down Centre Avenue. After they were confronted by police, the crowd retreated back toward the Home Depot in East Liberty. By the time curfew came at 8:30 p.m., most of the crowd had completely dispersed and protesters headed home. Police on horseback, in vehicles, and on foot in riot gear swept through the East Liberty business district. According to news reports, some people were arrested in East Liberty for violating curfew.

At this time CP left the scene.