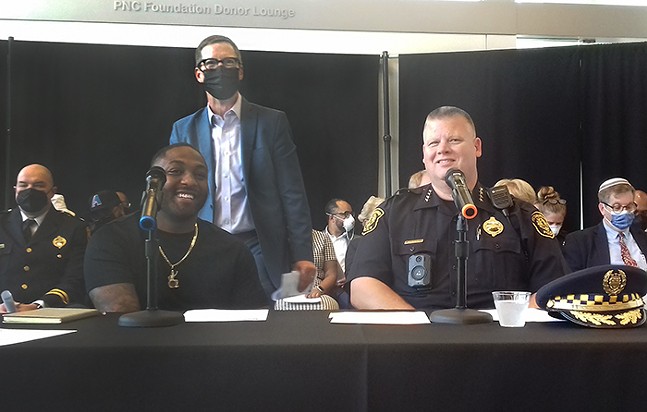 Leon Ford spent many years consumed with rage after he was shot five times by Pittsburgh Police officers in 2012.

His anger spilled out onto the pages of a book he authored in 2018 and later onto Twitter threads criticizing Pittsburgh Police Chief Scott Schubert as racist and ineffective. But now, after a series of face-to-face meetings with Schubert, the former antagonists have joined up to launch a new anti-gun violence initiative.

Backed by an initial $75,000 microgrant from Heal America, the Hear Foundation is getting ready to launch three community programs this summer. Beyond that, its mission involves “fostering collaboration between law enforcement, city officials, community groups and residents in order to build a safe, thriving community for all.”

The foundation has recruited a diverse board from leaders in law enforcement, local government, and nonprofit and business communities. Former Google executive Kamal Nigam has been appointed as executive director.

Ford told those at a launch event on June 22 about how the healing he found through years of therapy has allowed him to extend the healing process to others. Spearheading the Hear Foundation, is, he says, another extension of this.

Under its initial “Summer of Healing” programming, the foundation plans to support free summer camps in East Liberty, the West End, and the South Hills, where children will engage with law enforcement representatives on topics like police reform and public safety concerns, while receiving holistic care and academic support.

The foundation will also be at work at Pittsburgh’s Perry High School, recruiting five students to help assemble a school-wide safety plan “in conjunction with a school social worker and a non-profit leader focused on violence intervention.”

The third prong in the foundation’s summer of healing initiatives involves supporting the Center for Victims in hosting a series of summer workshops for training 150 community leaders “in the science and impact of trauma.”

While outlining these projects and the group’s broader mission, board members frequently returned to the powerful display of unity captured in Ford’s and Schubert’s unlikely partnership.

“In order to tackle this, we have to tackle it together,” said Pittsburgh Mayor Ed Gainey, who hit on similar themes when unveiling his own violence prevention plan earlier this month.

Schubert, who has worked in Pittsburgh law enforcement for nearly 30 years, will retire July 1. He said the country at-large is suffering from a lack of conversations between people like him and Ford, and pointed to their breakthrough as an example of what can happen when people from different camps find common ground.

“You see what happens when two people like us, who probably should not be friends, came together,” he said

Still, some are critical the partnership could gloss over long-standing distrust between law enforcement and Pittsburgh’s Black community.

Lorenzo Rulli, a Pittsburgh resident who was jailed during anti-police protests in 2020, said in a statement the foundation could be dangerous to Pittsburgh’s racially diverse residents.

“I cannot support a collaboration with police who are never held accountable for the violence they create for, and in, Black and Brown communities,” Lorenzo says. “Ignoring that fact is dangerous. This collaboration and board is doing just that. Invest in Black communities, not in policing them.”