The victims of the Tree of Life synagogue shooting lived in city neighborhoods and Allegheny County suburbs, and ranged from 54-97 years old. 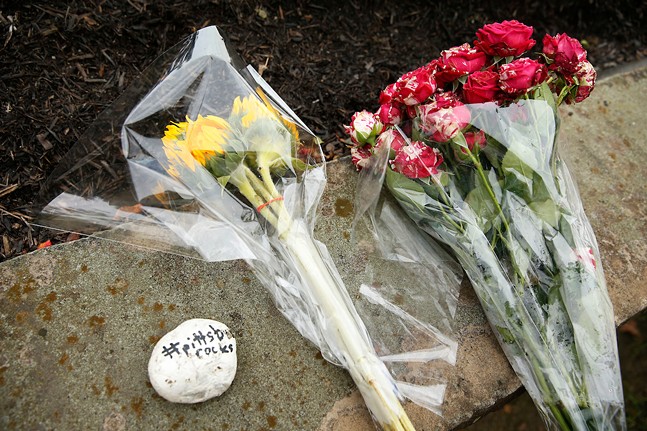 CP photo: Jared Wickerham
Flowers are left at a nearby intersection following a mass shooting at the Tree of Life Synagogue in Squirrel Hill on Sat., Oct. 27.
Allegheny County police have released the names of the 11 victims of Saturday's tragic mass shooting in Pittsburgh's Squirrel Hill neighborhood.

The victims were shot inside the Tree of Life synagogue and they include a husband and wife, and two brothers. All were between 54-97 years old.

They are listed here:
Jeff Finkelstein, CEO of the Jewish Federation of Greater Pittsburgh, spoke at today's morning press conference where the names were released. He was dismayed.

"This is an awful awful period for our Jewish communities," said Finkelstein. "And especially when you hear the names."

The Anti-Defamation League has stated that this was "likely the deadliest attack on the Jewish community in the history of the United States." The suspect, Robert Bowers of Baldwin, reportedly said "All Jews must die because they are committing genocide against my people," as he surrendered.

Six people were also shot and injured during the shooting, including three Pittsburgh Police officers.

Pittsburgh Mayor Bill Peduto spoke at this morning's press conference. He condemned the shooting, but had faith in Pittsburgh's ability to get through this tough time.

"Pittsburgh is a strong town, we are a resilient city," said Peduto. "We have been knocked down before. We will pull ourselves up. We have always done it in one way, by working together."

Peduto also called for gun reform to try to stop future mass shootings. "We should be looking to eliminate irrational behavior," said Peduto. "Our approach should be how do we take the guns, which is the common denominator, out of the hands of those looking to commit these crimes."

Today, the Jewish Federation of Greater Pittsburgh is holding an interfaith gathering and vigil at the Christ United Methodist Church in Bethel Park at 2 p.m.

A Community Gathering of Song and Prayer, organized by If Not Now Pittsburgh, is also scheduled for today at 4:30 p.m.