Pittsburgh City Paper witnessed Pittsburgh Police using apparent pepper spray on protesters at close range, and give confusing dispersal orders that included demanding that protesters leave Mellon Park in Shadyside, but then also blocking protesters and journalists from returning to their cars outside of the park. One protester was arrested, and it appears as though the police ordered protesters into Mellon Park, only to issue a dispersal order and use force on protesters, claiming the park was closed two hours before city parks are actually closed. This tactic is known as kettling.

The night before, on Tue., Aug. 18, several protesters stayed outside of Peduto's house until the morning, when they were told to leave by police. These particular protests are in response to an incident on Sat., Aug. 15, in which plain clothes police arrested a bike marshal during a Black Lives Matter protest march and took him away in an unmarked van. Allegheny County District Attorney Stephen Zappala later said the marshal never should have been arrested, and instead given a ticket at most. 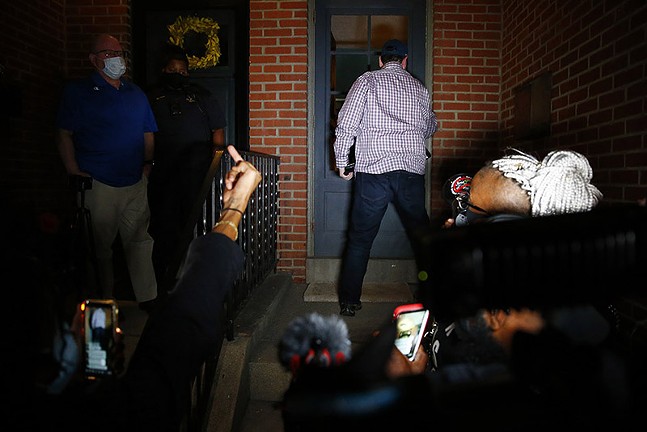 CP photo: Jared Wickerham
Pittsburgh Mayor Bill Peduto returns into his house after an exchange with protesters ends in an impasse.
In a statement, Peduto said he was "livid" about the arrest tactic, but after the overnight protest outside his house, he issued another statement that he "cannot defend" his neighbors "being disturbed through the night and morning, and a peaceful protest devolving into unacceptable conduct in which residents are being harassed and threatened."

The protest last night began peaceful, when protesters gathered outside of Peduto's house on Hastings Street and spoke with the mayor for some time. The demonstrations stayed that way for most of the night, until shortly after 10 p.m., when police announced that the protest was an unlawful assembly and that protesters had two minutes to disperse.

Mayor Bill Peduto addressed protesters on his front porch in the last hour.

The exchange ended in an impasse.

Despite receiving the audience they asked for, the protesters continue to loudly demonstrate outside his Point Breeze home. pic.twitter.com/psK0fr57s5


Pittsburgh Police then provided route options out of the residential neighborhood, and protesters complied by leaving Hastings Street, marching through Point Breeze, and eventually arriving at the intersection of Fifth Avenue and Elysian Street, where police blocked off the streets. Police, some of whom were dressed in military fatigues and riot gear, told protesters that they were not allowed to stand in the street or on the sidewalk, and had to enter Mellon Park.

CP photographer Jared Wickerham, who was also on the scene and was hit by the spray, heard projectiles fired, and there were also reports of protesters getting hit with projectiles. In a video from freelance journalist Christian Snyder, sounds can be heard of what Snyder called impact munitions being used.


Police are using what appears to be pepper spray pic.twitter.com/aIR13xMC6l

The controversial police tactic of confining protesters to a certain area, forcing them to disperse, and making arrests is referred to as kettling. Some experts have called kettling a violation of constitutional rights, and the ACLU has filed lawsuits over kettling as protests in other cities.

One person was arrested and charged with felony aggravated assault and riot, as well as resisting arrest, failure to disperse, and disorderly conduct, according to court documents.

Hours after this story was initially published, Pittsburgh Public Safety spokesperson Cara Cruz sent a statement to CP: "Public Safety and the Mayor's Office are in the process of reviewing actions by police and protesters shortly after dispersal orders were issued outside the Mayor's residence last evening. Information will be shared with the public and the media once it is available."

In the aftermath of the use of chemical weapons, several protesters called out for medics. One protester claimed that a police officer ripped off their mask and goggles before pepper spraying them. Other protesters reported being shoved to the ground by police. And reports indicate that some protesters became sick after being exposed to apparent pepper spray. 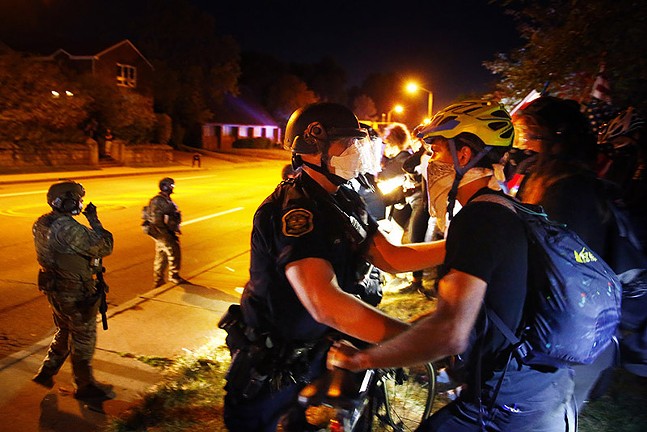 CP photo: Jared Wickerham
Pittsburgh Police face off with protesters.
"Police indiscriminate use of pepper spray or tear gas (or some chemical) is especially concerning in light of the pandemic, as its designed to make peoples’ eyes water and burn, causing protesters to spit, cough, choke, retch, and vomit..." tweeted Dickinson.

Before the situation escalated, the protest outside Peduto’s house was relatively amicable. Protesters chanted, danced, sang, passed out food and drinks. Neighborhood kids walked around barefoot and showed their support. Peduto sat on his front stoop observing (initially without a mask, until a protester told him to put one on). Eventually, as more protesters arrived and asked to speak with Peduto, he invited protesters up to his stoop to speak with him. While the official Twitter account of the mayor live-streamed the conversation, Peduto talked with protesters about the actions of police and protesters the night before, and of previous conflicts with the police during the past couple months of protests. 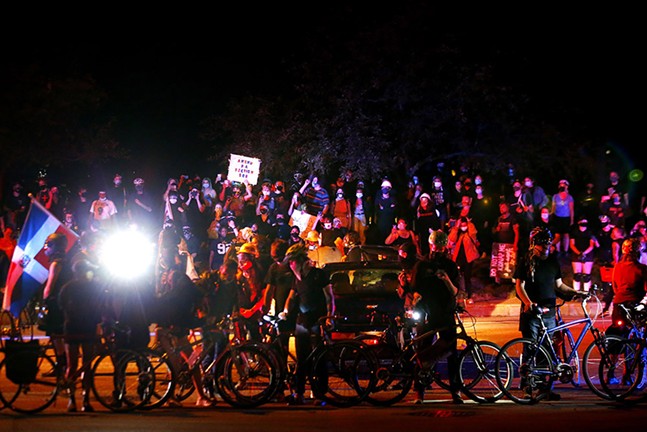 CP photo: Jared Wickerham
Pittsburghers protest against the actions of Pittsburgh Police and Mayor Peduto on Wed., Aug. 19.
During the discussion, protesters pressed Peduto on accountability for police officers, claiming that police put in a call the night before that protesters were surrounding their vehicles, which protesters say was false. While the discussion began calm, it took a turn when Peduto suggested that protesters brought in a DJ to have concerts on his street. Protesters then brought out megaphones with sirens and began chanting, "Hey hey, ho ho, Mayor Peduto has got to go," at which point Peduto went back inside his house.

Protesters continued chanting, until shortly after 10 p.m., when police announced the protest was an unlawful assembly, and that they had two minutes to disperse, listing several exit routes protesters could take, including toward Mellon Park. Protesters walked as a group toward Mellon Park. Just before the entrance, police on foot and motorcycles blocked off Fifth Avenue, and announced that protesters had to vacate the street and sidewalk, and that they had to enter Mellon Park, where police began using chemical spray and projectiles.

Several journalists, including CP, were parked back near Peduto's house, and had to walk back through the police blockade to get there. Upon reaching the police, they told reporters, and several protesters also trying to get to their cars, that only one person could go through at a time, and once they exited with their car, another from the group could enter. The group included several women, who loudly objected the order to walk to their cars alone late at night. Instead of going to the cars one at a time, the group took the route of walking as a group, taking a detour of an additional 1.3 miles at around 11 p.m.