This year's At the Byham features works by Balanchine, Graham, Dwight Rhoden and David Parsons 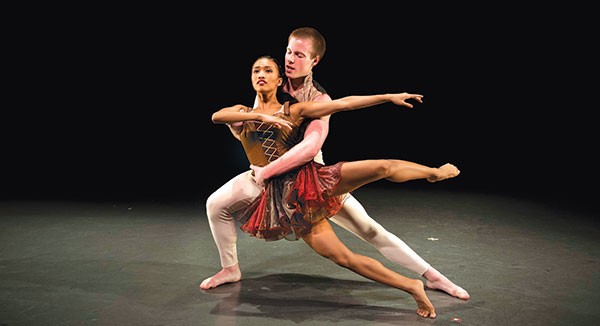 Point Park University dance alumni seem to be everywhere: on Broadway, and in national touring shows and dance companies, on television and in the movies. So You Think You Can Dance finalist Neil Haskell, for instance, recently appeared on an episode of Glee, while Luke Murphy stars in the movie Five Dances. They are just two of the dancers and choreographers who've come out of Point Park's prestigious dance program.

For the program's 245 students, a highlight of their performance opportunities at Point Park is At the Byham. Performed by the Conservatory Dance Company, this annual marquee showcase, celebrating its 10th anniversary, runs April 17-19 at the Byham Theater. The show features works by David Parsons and Dwight Rhoden and masterworks by Martha Graham and George Balanchine.

One student looking to follow in the footsteps of notable alumni is senior dance major Kathryn Van Yahres. In two of the program's four performances, the 22-year-old from Philadelphia will dance the lead role of the waltz girl in Balanchine's "Serenade" (1935). Perhaps the most famous of his ballets, "Serenade" — set to Tchaikovsky's Serenade for Strings in C, Op. 48 — is a demanding and visually stunning neo-classical ballet originally created for students of the School of American Ballet.

Unconventionally, the waltz girl arrives late to one scene, and in another, she falls down. "I am completely enjoying this role," says Yahres. "It challenges my stamina and technical ability."

Yahres calls this year's At the Byham one of the best she has been a part of, thanks also to works including Rhoden's "Mercy" (2009). Familiar here for his work with Pittsburgh Ballet Theatre, Rhoden says via email that "Mercy," set to music by Steve Reich and others, "revolves around world issues of violence, and unrest." CDC will perform an excerpt of the two-act ballet.

Graham's "Steps in the Street," an excerpt from 1936's Chronicle, was also inspired by a darker subject: the rise of fascism prior to World War II. The work "deals with isolation after great tragedy, but also suggests the endurance of the human spirit," says Point Park associate professor Judith Leifer-Bentz. Completing the program is Parsons' vigorous "Wolfgang," (2005) danced to music by Mozart.