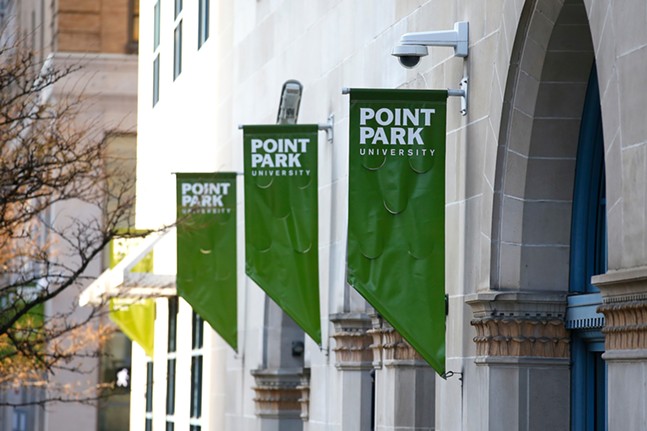 CP Photo: Jared Wickerham
Point Park University in Downtown Pittsburgh
After months of negotiations, Point Park University offered a new contract proposal to their faculty’s union, including more benefits and higher salary increases, and the union feels optimistic about it.

The university and its faculty union, which is represented by The Newspaper Guild of Pittsburgh/Communications Workers of America, met with the university 25 times since June, and recently Point Park offered the tentative agreements.

“We are very excited by this agreement,” says Point Park professor and Faculty Union Chair J. Dwight Hines. “It represents, in every measure, a significant improvement in the compensation and working conditions from our previous contract and from what management was hoping to force us to accept in July.”

Hines said Point Park agreed to increase minimum salaries for every full-time faculty member in the new contract, affecting lecturer positions the most because they represent nearly 10% of their union and would receive salary increases from 12% to 16% this academic year.

In Point Park’s press release on Nov. 2, the tentative agreement included salary increases between 3.5%-4.25% percent over the next three years, new policies on leaves for the Juneteenth holiday and previously unrecognized religious observances, as well as increases in faculty development funding.

Point Park also offers parental leave. New parents get four weeks of parental leave and still get 100% of their pay, and parents giving birth can receive short-term disability for a period of not being able to work and still be paid.

“We are particularly proud of the fact that we were able to convince management to accept our proposal of parental leave,” says Hines. “We did not have such a plan in our previous contract and were able to negotiate four weeks of paid leave, in addition to the preexisting provisions of Short-Term Disability.”

Since June 30, Point Park’s faculty union has been without a contract. Before their previous contract expired on June 4, the union met with the university's management and lawyers to discuss new agreements.

Point Park initially offered 3% wage increases each year of the agreement if the union accepted the offer and lump-sum payments of $1,200 to each eligible faculty member. However, union representatives disagreed with Point Park’s initial proposal, and rejected it.

“It obviously was a gross miscalculation on their part,” Hines says. “They sought to break us quickly. However, what they underestimated was our solidarity, and our resolve to no longer accept unfair/unreasonable terms.”

After various attempts to negotiate new contracts with no overall agreement made, faculty held a rally on Oct. 27 outside the university, handing out pamphlets that demanded fair contracts.

According to Hines, the union is set to hold a ratification vote for the agreement next week. If the contract is approved, faculty could be seeing new changes as of December.

“We are looking forward to working with management to implement the new collective agreement as a means to continue to strengthen Point Park University’s commitment not just to its full-time faculty but also to the community as a whole, especially our students and their educational experience,” says Hines.