CP photo: Jared Wickerham
Dejah Monea
Dejah Monea got the short end of the stick this year. Along with guitarist Elias Khouri, Monea was chosen as a Pioneer Records Star for the 2019-20 season — an opportunity at Point Park University usually reserved for one person, meaning all the perks were split in half. And then the pandemic hit, shuttering college campuses around the country. Yet even with the odds stacked against her, Monea still managed to release her debut album, Flowers and Dopamine, albeit at a later date, all the while remaining positive and learning to adapt.

Born and raised in Pittsburgh, Monea attended Pittsburgh Creative and Performing Arts School (CAPA) from 6-12 grade. She was a vocal major but wasn’t proactive when it came to creating music.

“I was working on the skill of singing,” she says. “But not songwriting and recording and stuff like that.”

Monea then went to The University of the Arts (UARTS) in Philadelphia for her freshman year of college before transferring to Point Park University where she majors in Sports, Art, Entertainment, and Music management. It was during her short time at UARTS that she began to dabble in songwriting and release her first singles.

“Being around artists 24/7 propelled me,” says Monea. She was also minoring in music business technology, which allowed her to record music and take songwriting classes. “Learning more about it allowed me to get into a creative space. Plus, all my friends [sang].”
click to enlarge

Thus, the pulsating track “Fiji Water” and the velvety “Fix It” were born. “I didn’t even know I wanted to do an album at first,” says Monea. But when the idea came about, she made sure those initial tracks were a part of Flowers and Dopamine.

“Songwriting for me is healing,” she says. “There was no force creating this album. I wanted it to be very much me and very genuine to my personality. I hope people hear the effort whenever they listen.”

Monea describes her personality as light. She prefers a field of flowers to drama, and upholds a “go with the flow” attitude. An example of this is the final track on Flowers and Dopamine, “It Is What It Is.”

When Monea went into the studio to create and record a song as part of her Pioneer Records Star contract and was asked what she wanted the song to be about, she simply said, “It is what it is.”

As a Pioneer Star, Monea and Khouri had the opportunity to record a song with Jesse Naus, owner and engineer at Red Caiman Studios. But because there were two of them, studio time was cut in half to accommodate both.

With coronavirus closures, Monea felt she had to rush somewhat to get “It Is What It Is” finished. “In other situations, I probably would have rewritten some parts, but I think it turned out well.” 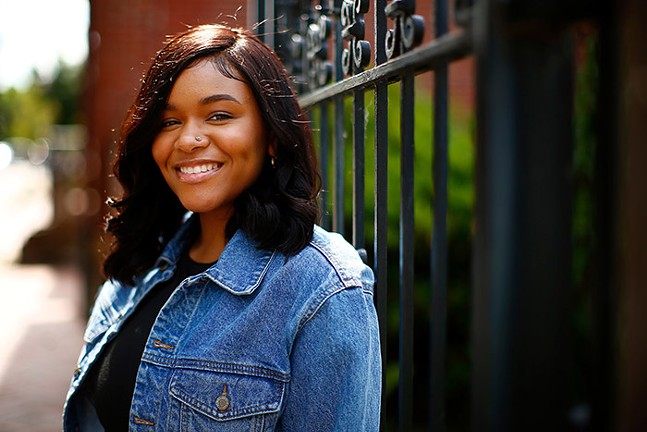 CP photo: Jared Wickerham
Dejah Monea
Other aspects were split as well: Monea got to work with the SAEM Music Video Workshop class and the University’s cinema arts department to film a music video to promote the track (it has yet to be released), while Khouri was to be the main headliner for the Pioneer Records Present show at Stage AE (the show was postponed). But while Monea did not get the full Pioneer Records experience, it was her acceptance into the program that drew her to pursue a music career seriously.

Shortly after learning she would be a Pioneer Star, Monea applied for a grant from Advancing Black Arts in Pittsburgh, a joint program of The Pittsburgh Foundation and The Heinz Endowments. She knew to get the production quality that she wanted for an album she would need money to do so, and in Dec. 2019, Monea was awarded $15,000 to support the creation and promotion of her debut album.

“That’s when I decided to write more actively,” says Monea. “As I was experiencing life, the songs just kind of came to me.”

Monea wishes to connect with anyone who relates to her music, as songs cover relatable topics like in tracks “One of Those Days,” “Love Yourself,” and “Fuck You Very Much.”

“There’s always someone who feels the same way you do,” says Monea. “All I know is that when a person realizes that they aren’t alone, it makes a world of difference. This is why I stuff my songs with emotion and make sure the sound is always a vibe.”
Listen to Flowers and Dopamine on Spotify