The Crucible feels as though it were written last week. 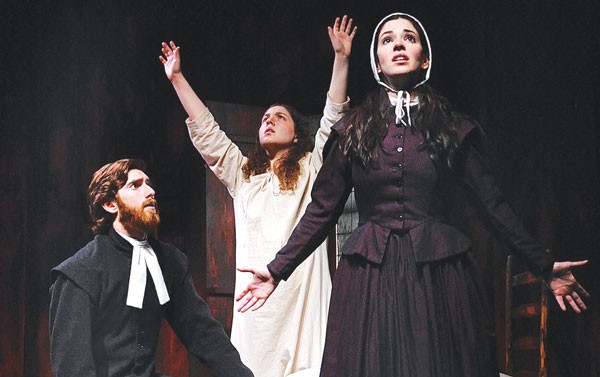 I've seen innumerable productions of The Crucible, Arthur Miller's drama in which the Salem witch trials of 1692 serve as a political allegory for the 1950s Red Scare. Still, I chose to review Point Park University's Conservatory Theatre Company's new staging of this work that premiered in 1953. I enjoy The Crucible if for no other reason than because it's from an era when play structure and construction were considered essential elements of playwriting. And Arthur Miller wrote steel-beamed, iron-riveted tales.

With Shirley Tannenbaum's textbook example of intelligent and meticulous direction, this production gives Miller's writing its full due. Thanks to the work of Tannenbaum and company, it's impossible not to revel in Miller's technical genius.

What I hadn't counted on, not having seen the play in several years, is that The Crucible is, amazingly, more relevant than it's ever been. Forget Joseph McCarthy's HUAC hearings, to which this play was written in response. I've just come through the ugliest presidential election of my life. The Crucible feels as though it were written last week as a slightly fictionalized portrait of the black, venomous powers that have controlled the political landscape over the past few years.

In Salem — certainly in Miller's recreation of it — all that's required to make you a witch is to be accused. The truth doesn't matter; in fact, when political hysteria is fueled by lies, truth and reason are actually liabilities. Brilliantly, but never obviously, Miller shows how a handful of people can, through nothing other than clear-eyed self-interest, level a charge (the more absurd the better) and a frightened, uneducated, religiously maniacal crowd can be whipped into lethal, faith-based frenzy. And in his most breathtaking and blood-chilling stroke, the accusations, trials, convictions and executions are carried out with learned, legal righteousness.

It's no exaggeration to say that at various points I was actually nauseated. When, in the final act, a thrillingly talented Alex Walton, as John Proctor, refuses to sign a false confession to save his life, the character's famous line "It is my name! I will never have another!" seemed to come not only from the pit of Walton's soul, but my own as well. My sobs would have alarmed anyone around me ... if they hadn't been crying just as loudly.

If there is one big problem with The Crucible, it's that Miller — as is unfortunately true in most of his work — never breaks free from the Madonna/Whore paradigm in his female characters. That makes the nuanced accomplishments of Hilary Williams, as Abigail, and Lily Davis, as Elizabeth Proctor, that much more remarkable.

It's depressing as hell, but Point Park's Crucible is essential viewing.