Even if the story is hackneyed, the dialogue in Seven Guitars is as sumptuous as the blues music that inspired it. 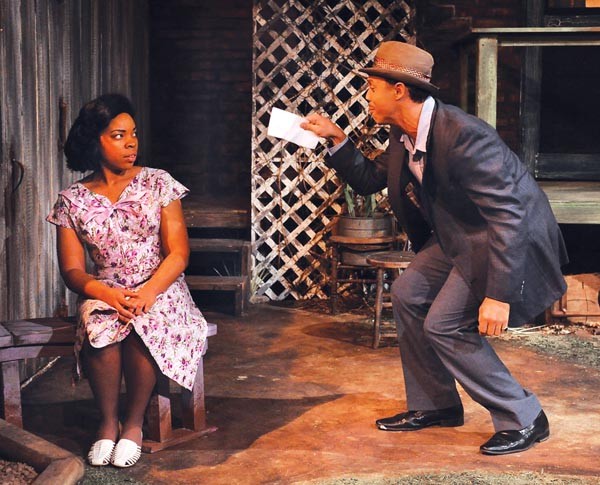 First things first: Seven Guitars, by August Wilson, is receiving a very solid production at the Pittsburgh Playhouse. If you have never seen Seven Guitars, rest assured that Point Park Conservatory does the play justice. The ensemble is young, but the performances are mature. As the luckless musician Floyd "Schoolboy" Barton, Trumaine Verret-Fleming is charismatic and passionate, and as the imbalanced King Hedley, Saladin White II ably juggles both crazy talk and a challenging Caribbean accent.

But here's the difficult truth: Seven Guitars is an unbelievably boring play. In this critic's opinion, when August Wilson wrote his Pittsburgh Cycle, he wrote nine masterpieces and one dud. That dud was Seven Guitars, a 160-minute melodrama, set in 1948, in which virtually nothing happens. Floyd is a narcissistic guitarist who wants to move to Chicago, but he doesn't have the money. He hangs out in an alleyway with his friends, then he commits some kind of crime offstage, and then he dies. Since the story is told in flashback, there's no suspense, no intrigue, only a bunch of bored people playing cards and trading recipes. At one point, the local lunatic slashes a rooster's throat, but unless you're really well versed in your turn-of-the-century cornet players, you'll never really understand why.

That said, Seven Guitars is considered a modern classic, and if you one day hope to comprehend Wilson's play King Hedley II, you sort of have to watch this prequel. And if you have to watch it, this Playhouse production has everything. Jade King Carroll is an accomplished director, and Rich Preffer's set design is picture-perfect. For two long acts, the young actors sing, play instruments and deliver complex monologues nearly bursting with metaphor. Everyone looks as committed as they can be.

If you find yourself nodding off during one of the play's endless digressions, you could try watching for Biblical references, or counting how many times Floyd and friends make sexual innuendos. Wilson's greatest skill was his language, and even if the story is hackneyed, the dialogue in Seven Guitars is as sumptuous as the blues music that inspired it. These lines aren't easy to learn, much less understand, and really listening to these vibrant student performers is the biggest compliment you can pay.