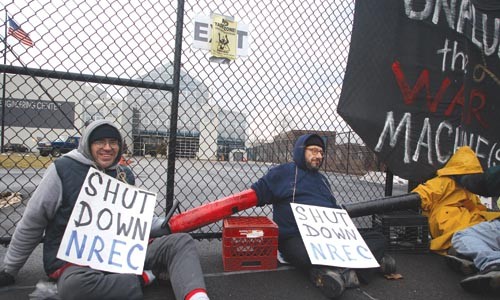 Photo by Renee Rosensteel
The PVC piping that protesters used to lock themselves together on March 2 outside of Carnegie Mellon's National Robotics Engineering Center could bring them harsher penalties.

The 14 protesters arrested March 2 outside of a robotics research center are facing more serious criminal charges than they expected because they chose to link themselves together with chains and PVC piping -- articles that city police have labeled "instruments of a crime."

So instead of disposing of the charges in a one-day court appearance, the case was continued until May 3, so the protesters' attorney, Michael Healey, can try to work out a deal with the district attorney's office. However, it's hard to say how easy reaching a deal will be; Healey says there is pressure from "people not involved in the case" to make sure the "instruments" charge is more strictly enforced.

The activists, who barricaded the entrances to Carnegie Mellon's National Robotics Engineering Center, went to City Municipal Court March 9 to deal with their cases. Healey said the charges are normally disposed of in one court hearing and the sentences usually include fines and community service.

The other two charges against the protesters were failure to disperse and obstruction of a highway -- second- and third-degree misdemeanors. But the possession of instruments of a crime charge -- a first-degree misdemeanor -- has never been used in the city against protesters, Healey says. It is more commonly applied against burglars carrying tools for a break-in, not passive protesters.

The maximum penalty for the instruments charge is five years in prison. While all the protesters would qualify for probation because they lack serious criminal records, being on probation would put them at risk of harsher penalties if they were arrested again, even for non-violent protest.

Healey says he believes there are outside sources at work to keep the case from reaching an easy resolution.

"There's a difference of opinion on whether we can dispose of this case [in city court] or do we have to go to the [Court of Common Pleas] on the more serious charges," Healey explained. "It is my understanding that federal officials seem to have an interest in the case."

Healey wouldn't elaborate on the statement and said he didn't know which federal agency was applying the pressure. The office of District Attorney Stephen Zappala did not return phone calls seeking comment. But at least one protester, Pittsburgh Organizing Group member Alex Bradley, said the Federal Bureau of Investigation has contacted him.

Bradley, who has met with the other arrestees as well as other POG members since March 2, says he received a phone message from the FBI after the protest. The agent did not answer Bradley's lawyer's call, he says, nor City Paper's request for comment.

Protest organizers say it is ironic that the very method of their resistance, which immobilized them and guaranteed the protest would be nonviolent, has resulted in the stiffest charges. As Bradley wrote in an e-mail after the FBI contact: "The criteria for the state deciding whether to engage in political repression ... is not whether you wore a black mask or a suit, whether you locked down or threw a brick, but whether they perceive your action/campaign as a threat to the interests they're serving.

"If we are effective in challenging the ability of a university to profit from participation in war or opposing the ability of the government to continue violently occupying other countries, they're going to come after us, and we're more than willing to pay that price to do what we feel we must to make a difference."

Bradley, of Bloomfield, has been one of the organizers of POG's campaign against local military recruiters since 2005. His presence at NREC drew special attention from local police: Just before 10 riot-gear-clad officers surrounded those locked across 43rd Street, a plainclothes female office warned them to watch Bradley -- identifying him by name -- because "he always causes a problem."

In fact, all but two of the protesters simply went limp after being cut out of their lockboxes by city paramedics and firefighters. One was pinned to the ground by police after shouting and struggling briefly after being released from her lockbox. Another, appearing to show no signs of resistance, nonetheless drew a crowd of officers before being placed in plastic handcuffs.

Cleveland resident Alecia Ott, who was also arrested by blocking NREC's back entrance, says she is not concerned about federal attention or the unusual charge. "I've never been arrested," Ott says. "I'm very proud of how POG organized and implemented the action. Everything went smoothly. We definitely got our message across. Other activists [in other cities] have said this inspires them to take action in their own cities, similar to what we've done."

Prior to the protest, another NREC arrestee, 17-year-old Schenley High School senior Richard Carr of Point Breeze, said he was "kind of apprehensive about what the police response is going to be." Afterwards his father David Carr, who stood on the sidelines on March 2, wrote a letter to the Pittsburgh Post-Gazette praising local police response. The elder Carr, a Vietnam veteran, says that in 1971, he participated in a weeklong occupation of the Mall in Washington, D.C. He praised the NREC protesters' nonviolent actions as he watched them: "I respect their right to do it, and it takes all kinds of protests" to end a war, he said, "just like it did in the Vietnam War.

"They're not coming in here in the dead of night throwing Molotov cocktails," he added. "They're bearing personal witness."

For arrestee statements, see: http://organizepittsburgh.org/m2/statements.php. For video of the blockade, see: http://www.youtube.com/blastfurnacepgh.