Point of Law: Do 'safe passing' regulations really make it safer for cyclists if they're not enforced? | News | Pittsburgh | Pittsburgh City Paper

Point of Law: Do 'safe passing' regulations really make it safer for cyclists if they're not enforced?

"From day one we suspected it would be very hard to write citations, because it's a judgment call." 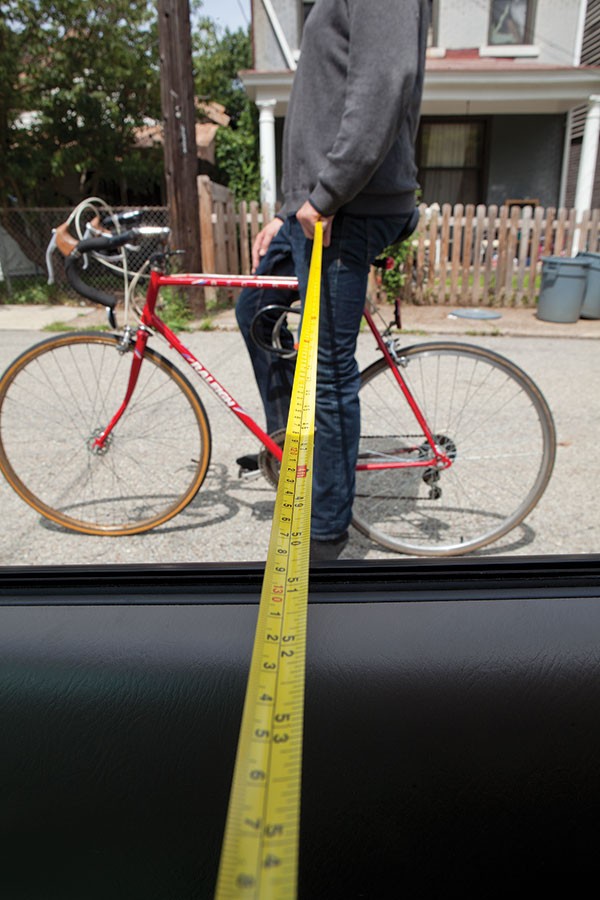 It isn't often that lawmakers spend years shepherding legislation they know will likely not be enforced.

Yet when it came to state Rep. Ron Miller's "Safe Passing" bicycle bill — a law designed to give cyclists a buffer from drivers — that's exactly what he foresaw.

"From day one, we suspected it would be very hard to write citations, because it's a judgment call" for law enforcement, says Miller, a York Republican.

Overwhelmingly passed by the legislature and signed by Gov. Tom Corbett in February 2012, the law was celebrated as a win by many bike advocates, who have successfully lobbied 25 state governments nationwide to pass similar measures.

The law requires cars to allow 4 feet of space when overtaking bicycles, and to pass at a "careful and prudent reduced speed." Drivers are barred from the right or left "hook," a maneuver that cuts off bikers by turning in front of them. And bikers must "use reasonable efforts so as not to impede the normal and reasonable movement of traffic." Violating the law is a summary offense — in this case, a $25 fine.

But as in many states with safe-passing laws, enforcement in Pennsylvania has been spotty: Just 42 citations have been issued statewide since the law took effect 28 months ago, 12 of which were recorded in Allegheny County, according to a City Paper review of court data. And it's not clear if the law is having a significant effect on the number of car-related bike crashes.

"It's not being enforced to the extent it should be," Bike Pittsburgh executive director Scott Bricker says today. "After two years, you would hope that tool would be used more often."

So why have so many politicians and advocacy groups bothered to pass bike-safety laws that are often unenforced and, some argue, unenforceable?

After all, citing drivers would require officers to both witness an instance of close-passing and accurately eyeball the distance between biker and motorist.

"It's just like the cell-phone law" that bars texting and driving, explains Pittsburgh Police Cmdr. Eric Holmes, noting that it's a tough violation for officers to witness. "They want to make sure the person they're writing up has actually committed the violation. They don't want to write tickets just to write tickets."

But some advocates of the law say it's largely about educating drivers and bikers of their responsibilities, and enshrining the idea that bikes have a right to space on the road cars shouldn't violate — something that can help assign liability after a crash.

These laws "should change the overall culture," says Charles Brown, a senior researcher at the Alan M. Voorhees Transportation Center at Rutgers University. Brown, who authored a study of safe-passing laws across the country, adds that such a shift "should lead to a decrease in the number of cyclists who are injured and killed on the roadways," though nationally, he notes, "There has been little overall enforcement."

While there isn't total agreement on how important enforcement is to the law's success, there is consensus that the law should be evaluated based on whether it reduces the number of car-related bike crashes.

"Without a doubt, you want to see those [numbers] go down," Bike Pittsburgh's Bricker says, adding that one of the biggest reasons people avoid biking is a fear of having to occupy the same space as cars.

And while the law hasn't been rigorously enforced, some contend that education alone could reduce crash rates. PennDOT, for instance, now includes references to the 4-foot buffer in its driver's manual and test, according to PennDOT spokesperson Juliann Sheldon. And even though PennDOT has not created any signage alerting bikers or drivers to the new law, Edgar Snyder & Associates teamed up with Bike Pittsburgh on an ad campaign promoting it.

In the two years since the law took effect, however, there have not been significant variations in the number of bike-related crashes in Allegheny County or across the state, PennDOT data show.

In fact, the number of crashes statewide increased to 1,390 in 2012 (the year the law took effect) from 1,324 the previous year. The number also increased in Allegheny County during that time — from 85 to 104 crashes, though that's within what appears to be the normal five-year range (in 2013, the number slid down to 93).

But data on "rear-end" collisions — the kind of crash experts say the law is likely to target — may tell a more encouraging story. Statewide, rear-end collisions have been trending downward since 2009, with the largest decreases after the safe-passing law took effect — from a five-year high of 106 in 2010 to 65 in 2013.

And while the overall number of crashes (the vast majority involved cars) did not decline, "there's probably some truth" that the law is having an effect, says Brown, the researcher who has studied safe-passing laws.