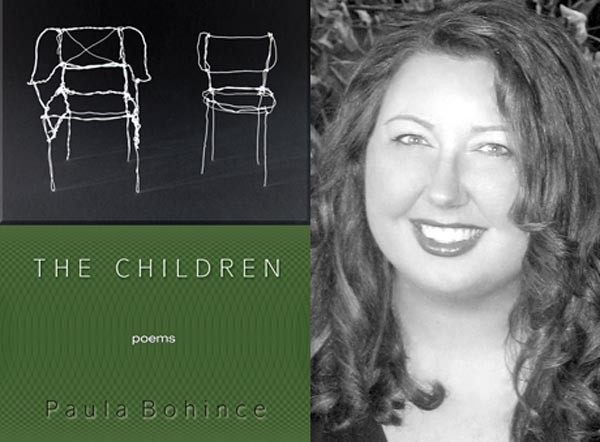 Not just kid stuff: Poet Paul Bohince draws on her Westmoreland County upbringing in her new collection, The Children.

Paula Bohince's second collection of poems, The Children (Sarabande Books), serves up a tasty broth of language. These verses conjure rural southwest Pennsylvania as an exotic locale, swirled with pussy willow, milkweed, hornet nests of gray papier-mâché, velvet-antlered deer, mushrooms like men on horseback, flusters of quail flushed from briar. It's a poetic landscape that seems to hover somewhere just above the labile surface of consciousness, where foggy memory gives birth to vivid, evocative imagery.

After growing up near Greensburg, Bohince spent time in New York City, earning a Master of Fine Arts degree in New York University's distinguished creative-writing program. She spent a year in Paris (as an Amy Lowell Poetry Travelling Scholar) before recently returning to live in Pittsburgh. Despite her years of urban culture and travel, the woods, fields and people of her Westmoreland County childhood are the lifeblood of Bohince's poetry.

In a few compact lines, for instance, "Night Vision" etches a word-picture of deer-spotting — lights beamed into cornfields at night to freeze the whitetails that come out like ghosts to feed. "Hour of emerald / and jet, when the herd performs / its ancient / reconnaissance ..." Bohince renders this intervention of human into animal realms as a predatory ritual of boyhood: "In murk, beneath a gaseous / August, this is the hour of boys killing / minutes before they break / and return, still boys, / to their homes."

The Children is partitioned into three sections, and this vision of whitetails is one of many associations to whiteness in the middle section. This theme is introduced by "Hare in Snow," an impressive poem inspired by Mark Rothko's sensitivity to fine color gradations, in which the stationary rabbit is a "Flaw in the opal of field."

As in "Night Vision," Bohince sees the animal as human prey — "Not-yet blood festival." Observed through a window, the rabbit draws the poet into a fascinating meditation, which leads to thoughts of mother-daughter relationship. The rabbit breaks stasis with startling quickness — "cruel as the feminine mind. Gone, the mist she releases I interpret as Mother's hairspray."

As with both these examples, Bohince's poetry occupies a solemn domain. Her first book, Incident at the Edge of Bayonet Woods, can be read as a murder mystery in the unusual form of a series of poems. The Harvard Review ranked it "among the darkest and most disturbing books of poetry published in the last decade," and highlighted gothic elements in her work.

That book centered on the poet's father and other men in his life, relationships still present in The Children. "Pinot Noir" gives us a "burned-down smokehouse," a place "where grass still holds the essence of pig fat" and "my father, seven, feeding his beagle / beer, laughter of the uncles resounding through air / as his pet topples over, lifting its legs to piss, exposing / its pink and hairless stomach ..."

In general, these poems challenge readers to tune their poetry antennae to a rarefied frequency. This is not, in other words, Billy Collins, or many other contemporary poets, who generally keep the tone on the light side and the situations familiar. With Bohince, we are drawn into an interior network that at its best sets off Plath-like, compressed-energy depth charges of imagery, but that also can produce the uncomfortable feeling that the poem is a puzzle to solve. There are at times mind-boggling lines, such as seeing milkweed blossoms as "brides flown / by wagon from Slovene lakes."

Bohince is widely published in prestigious journals, and her poetry's flirtations with obscurity may strike some readers as having a taint of academic-ness, or — if not that — as belonging among the top-shelf spirits, like single-malt Scotch: an acquired taste, not for everyone. The poems often demand lingering attention, and the lingering often rewards. I did, however, long to find more poems like "Spirits at the Edge of Bayonet Woods," from Bohince's first book, powerful in part because it moves fluently, without the hesitations of imagery that seems to require decoding.

Bohince loves sentence fragments, a commonplace aspect of contemporary poetry, though seldom as common as in her work. She also has a penchant for head-scratching adjective-noun pairings — "vatic cat," "exact wind," "humiliated fields" — that give the sense of a poet straining for effect.

Despite cavils, The Children is manifestly the work of a gifted poet. There's a place in the soul, which maybe only poetry touches, that's deeply grateful for poems as delicately crafted as Bohince's lament of isolation, "Everywhere I Went that Spring, I was Alone."