Don't be fooled by a book of poems whose titles include "Ass Whip Lesson" and "Bullshit Story." Jimmy Cvetic's Secret Society of Dog -- set mostly in the demimonde of cops and criminals -- only seems artless. But half the reason is that these vernacular, mostly narrative poems are so engaging, if often perversely so, that you don't stop to think about much else.

Cvetic is a local character of the first degree. For more than three decades he was an Allegheny County cop, including stints as a homicide detective and undercover narcotics officer whose colleagues called him "Dog." (He also served in Vietnam.) Since retiring, he's focused on managing boxing gyms, promoting fights and doing community work.

And he's written poems -- more than 3,000 of them, he says, 41 of which are collected here. To truly appreciate his work, you probably have to see him read it in person, something he's done in venues as diverse as a tiny Downtown boxing ring and at Oakland's Hemingway's Café, where he organizes the summer poetry series. Often dark, often howlingly funny; irreverent and humane; profane and occasionally sentimental, his work slaps you on the back and cuffs you on the ear, sometimes all at once.

The poems, rendered mostly in short, chunky lines, are typically blunt. One begins, "Sgt. Ruby and I caught the guy, / he raped this woman." Cvetic has a gift for gritty, street-smart dialogue, and many of the poems simply depict cops talking to each other. One third-party monologue, meanwhile, is the horrifying death-bed confession "Stanley Liked Snickers."

I was in the doper's house,
and we were all waiting for the dope man,
it was dark and rain.
He was to deliver two yards,
crack cocaine, and we were all to party.
So we hid cops everywhere,
in the bedrooms,
kitchen,
in the yard.
The Dopeman cometh,
bring with him his do bad.

But these poems do not just evoke darkness. What's impressive is Cvetic's ability to find the humanity, even the comedy, in the victims, victimizers and bystanders who people his vignettes.

"Mighty Mike" itself turns into a kind of slapstick, complete with the narrator's partner singing the Mighty Mouse theme song. So if many of these poems convey the toll police work takes on cops, the world depicted is also one where a burglar named Gummy shows up for his court hearing wearing a stolen set of (ill-fitting) dentures. A couple pieces are straight comic relief -- extended setups for mordant bar-stool punchlines.

The flipside of such accessibility is a modesty of poetic means: While Cvetic's poems often achieve a vibrant, Beat-style sense of rhythm, readers seeking displays of technique won't find it here. And in expressing grief for crime victims or fallen officers, Cvetic typically abandons any sense of irony or even distance from his subject.

Still, once you've started, you probably won't quit reading Secret Society of Dog: Cvetic's voice is real, urgent and knowing. It's no insult to say that this is a poetry book for someone who "won't read poetry" -- your Reagan Democrat uncle, say.

But though Cvetic is our Virgil in what's explicitly a cop's underworld, his poems don't constitute some referendum on the drug war, say. His vision is more complicated. Sorrow outweighs anger. Often he expresses empathy for these cops' robbers, even a sneaking admiration. Depicting a vice detail that ends with an embarrassed undercover cop who couldn't get a "date," Cvetic writes, "The night belongs to the ladies."

These poems have many faces. Elsewhere, recalling a snitch, he writes, "Shine was a good man, but I just couldn't trust him" -- a testament to the wary humanism of a narrator who loves people even though he's seen the worst side of them. 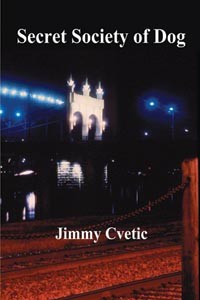