The "stars" of Wicked are undoubtedly the members of the design team, who have created the eye-popping, jaw-dropping onstage world. 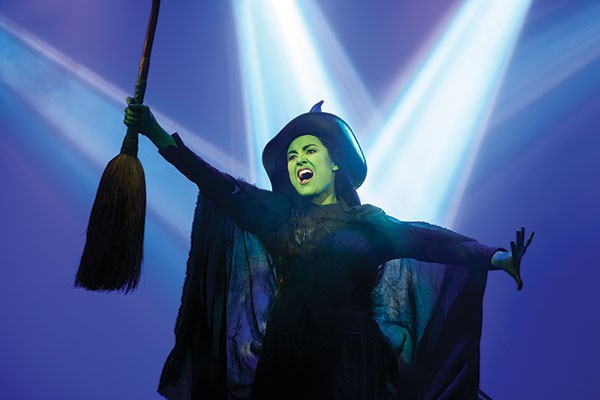 Not that this has anything to do with anything, but at the opening-night performance of the national tour of Wicked — now returning to Pittsburgh for its fourth engagement — one of the few remaining items on my theatrical wish list was realized.

Late in the first act, a patron sitting near the front row fell ill. People began crowding around and then — even as the cast on stage were plowing on — someone called out: "Is there a doctor in the house?"

In 25 years reviewing over 3,500 plays, I've never seen that happen. (There is a very well known local story that several years ago, amid similar circumstances, a certain drama professor rose in response and said: "I'm a doctor" ... in reference to his Ph.D. Unfortunately, I wasn't at that performance.)

The curtain came down, people rushed to give aid and the gentleman was carried out of the auditorium (an usher told he later that he had just fainted and been taken to the hospital). The show, as it must, went on.

I've seen this show three times before, so if nothing else, this made an interesting change.

Wicked is a mash-up of the original L. Frank Baum Oz stories, the 1995 Gregory Maguire revisionist version of the same name and, especially, the classic 1939 MGM film. Maguire's novel re-imagines Oz as a police state ruled by a great and powerful wizard nobody ever sees. Animals, who until now have been full citizens, are being forbidden to speak, removed from positions of authority and put into cages. The musical veers from Maguire's political thrust and focuses more on Elphaba and Glinda, two college roommates who eventually become what we now know as the Wicked Witch of the West and the Good Witch of the East. Both the book and the musical present Elphaba as one of the few non-wicked people in Oz ... but because of her green skin and animal-liberating activities, she's regarded as the villain.

Winnie Holzman's book has enough humor and imagination to carry this somewhat bloated show from beginning to end. Stephen Schwartz's frequently bombastic music and lyrics add to the bloat, but when he gets it right — as in the first act's curtain number, "Defying Gravity" — Wicked hits some remarkable high points.

Alison Luff and Gina Beck, as Elphaba and Glinda, have a strong onstage chemistry as best friends/enemies; Luff's powerhouse voice and Beck's comedic gifts complement each other beautifully. Alison Fraser's turn as Madame Morrible is a mannered one, though quite effective.

But the "stars" of Wicked are undoubtedly the members of the design team, who have created the eye-popping, jaw-dropping onstage Wicked world. Susan Hilferty's incredibly detailed costumes are as every bit as breathtaking as Eugene Lee's setting and Kenneth Posner's lights.

Now, all I need is for everyone who likes Shakespeare to move to another planet, and my wish list will be complete.