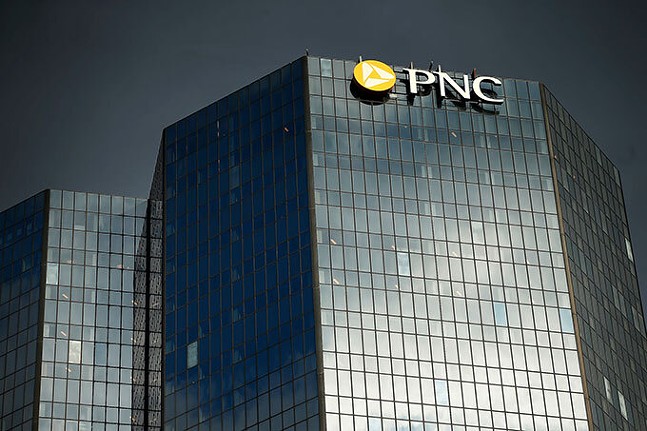 CP photo: Jared Wickerham
PNC Bank offices in Downtown Pittsburgh
Meredith Grelli woke up at 6 a.m. on the first day small-business loan applications could be submitted. She and her business partners worked for nine straight hours to ensure their applications and forms were flawless. Grelli was hopeful she could secure some much needed cash to pay her employees and the bills at her two local businesses: Wigle Whiskey and Threadbare Cider House.

The coronavirus closures have caused both brands to close up all their tasting rooms, venues, and restaurants. As a result, most of their 120 employees have been let go. But with the federal government allocating nearly $350 billion in loans for small businesses as part of the Paycheck Protection Program (PPP), Grelli was hopeful her businesses could access that cash and bring back many of her employees.

Like all businesses, Wigle and Threadbare had to submit applications through private lenders, like banks. For Grelli, this meant going through PNC Bank, the mega bank that’s based in Pittsburgh but has a large presence across the country.

For days, Grelli waited in limbo without any word from PNC about the status of her application or whether the loans had been secured. It wasn’t until almost two weeks later that Grelli learned the $350 billion in funds had dried up, and Wigle and Threadbare were without federal assistance for the foreseeable future.

Grelli wasn’t alone in failing to secure these loans. Scores of small businesses in Pittsburgh and across the country didn’t get any federal loans after applying through PNC. The shortage was somewhat expected, as coronavirus closures have caused historic levels of unemployment, and forecasters had predicted that the $350 billion in funds would be insufficient.

But it was more surprising that small businesses were leap-frogged in securing loans by large, wealthy corporations, and that PNC would allegedly be involved in favoring those corporations.

“We appreciate that banks are facing a large amount of applications, we understand those hardships,” says Grelli. “I think the thing that gives us pause [are] the reports [of] larger companies receiving funds and banks prioritizing this.”

Grelli says she believes her loan never even made it through PNC’s internal process. This sentiment has been expressed by other local businesses that applied for PPP loans through PNC. Pittsburgh City Paper was granted access to a private Facebook page for local business owners, many of whom expressed similar sentiments. On April 23, a lawsuit was filed in California court alleging that PNC "exploited the coronavirus crisis to line its pockets with hundreds of millions of taxpayer dollars while compounding the economic hardship suffered by small businesses and independent contractors." On April 22, NPR reported that banks, including PNC, earned $10 billion in fees while processing loans from the Small Business Administration (SBA).

According to CBS News, PNC secured PPP loans for two out of the seven biggest known borrowers from the program. The average PPP loan for the first round was about $206,000.

PNC Bank spokesperson Marcey Zwiebel denies any favoritism toward large companies on PNC’s part, and noted the incredibly high demand in PPP loans. Funds for PPP loans across the country ran out within a week of opening applications in early April.

“We devoted substantial resources to processing applications for all customers,” said Zwiebel in a statement to CP. “Ultimately, many of the applications that we were able to get approved by the SBA before the cutoff date were from very small businesses across our entire footprint. … PNC has long valued the relationships we have with our small business customers and we remain committed to assisting them in these difficult times.”

According to the Pittsburgh Business Times, PNC said it received more than 75,000 applications and processed and registered 20,000 loans totaling more than $9 billion during the first round of PPP funding. (Disclosure: Pittsburgh City Paper applied for and received a PPP loan through PNC.)

New applications for PPP loans opened on Mon., April 27 after Congress approved $310 billion in additional funding. Zwiebel says that PNC employees have continued to process applications, even before this recent funding was allocated, “so that we are prepared to submit them to the [Small Business Administration] should the additional funding be authorized." In the second round of funding, PNC submitted about 55,000 applications, according to the Pittsburgh Business Times.

Grelli is hopeful Wigle and Threadbare will secure loans during the second round, but she isn’t holding her breath. “We don’t really know where we stand in the queue,” she says. “We are optimistic, but cautiously so.”

Wigle has been able to bring in some revenue during the pandemic, thanks to online sales and the fact that state liquor stores have been closed during the pandemic. But her businesses still face significant financial losses. Grelli says their seven locations typically host about 150 events, like community fundraisers, over the summer months — the closures have effectively canceled all of those events.

Grelli says if her companies receive the loans, she would have to find space for 120 of her workers, some of whom might have to adapt to new positions until all of her locations are allowed to reopen. (One of the stipulations of the loan requires employers to bring back the entire workforce.)
click to enlarge 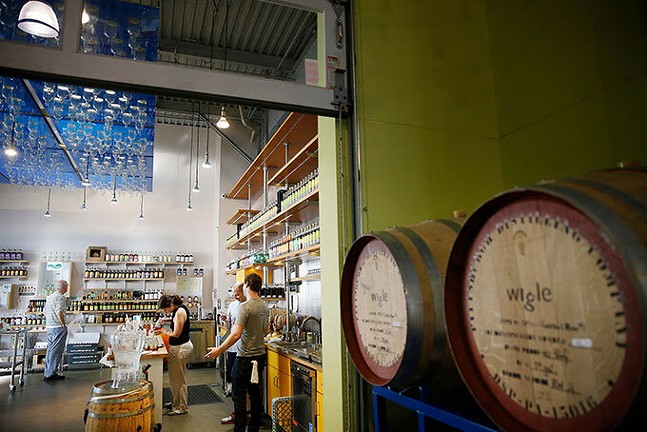 Kimberly Musial operates the Yoga Hive out of a studio in Garfield. She applied on the first day PPP loans were available, but failed to get a loan. She says PNC “has definitely not done a good job” in helping her and accused the bank of having no due diligence.

Musial said her communication with PNC staff has been poor and the status of her application is unclear, as is where she is in line (a sentiment also shared by many in the private Facebook group).

“You are just in the dark praying for the best,” says Musial.

As a yoga studio, Musial says her business is bringing in basically no revenue during the closures. If Yoga Hive were to receive a PPP loan, she says she would pay insurance, taxes, rent and contribute pay to her teachers, who are independent contractors.

A recent National Bureau of Economic Research survey found that only about 30% small businesses across the U.S. expect to survive a lockdown that lasts four months. Meanwhile, large retailers like Amazon, Costco, Dollar General, Home Depot, and Walmart are currently experiencing stock prices near record highs and massive profits.

Musial fears that if Pittsburgh small businesses fail to get the loans they need, they won't survive.

“We are in survival mode most of the time, now it is even more so than usual,” says Musial. “It feels like big companies and big banks are just always winning.”