"Neither the governor or I are interested in coming in and putting a Band-Aid over this." 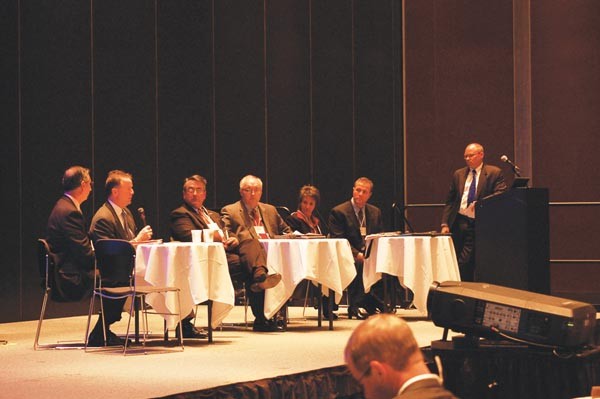 Since Gov. Tom Corbett took office, legislators, policy-makers and transit advocates have been calling on him to deal with the state's transportation-funding dilemma.

And for two years, Corbett has stayed generally silent — except to occasionally acknowledge it was a problem that had to be solved separately from the state budget, or to call on the Port Authority's union to make concessions.

But earlier this month at an event in New York, the Pittsburgh Post-Gazette reported that Corbett told reporters that he had a plan ready for 2013.

Details remain scarce, but state officials claim they're on the way. At the Southwestern Pennsylvania annual Smart Growth Conference, on Dec. 13, state transportation Secretary Barry Schoch said Corbett will soon reveal "an exact plan" on funding transportation across all modes.

"None of us want to pay more for anything, but if we don't start investing in this system, we're sending a heck of a bill on to the younger generation," Schoch said.

He said the plan would follow "the basic tenets" of suggestions proposed by the governor's own Transportation Funding Advisory Commission, which in 2011 identified around $2.5 billion in funding ideas — like uncapping the oil-franchise tax. But Schoch declined to elaborate at the conference, saying he did not want to "upstage" the governor.

He did give some hints — saying the state was "looking at" plans like converting transit fleets to run on natural gas, and consolidating regional transit systems. Schoch also said the administration would utilize "some new tools in the toolbox," such as recently enacted legislation that permits public-private partnerships to fund infrastructure and capital projects.

He also touted modernization efforts, research initiatives and changing internal business practices to generate cost savings within the agency itself. Meanwhile, he said, the state will be looking to local governments to chip in.

The solution put forth will be "sustainable to show growth so we're not in a situation where we have stagnant funding," Schoch said. "We want to do something that's long-term, sustainable, multimodal and addresses the problem."

"Neither the governor or I are interested in coming in and putting a Band-Aid over this," he said.

Short-term fixes have been the norm. When the Port Authority faced crippling service cuts and massive layoffs for 2011 as a result of flat state funding, then-governor Ed Rendell "flexed" money to the agency to avert cuts — a practice he had used before. The Port Authority used that money to reduce the cuts to 15 percent.

But still no long-term solution was proposed once Corbett took office. PAT faced a 35 percent service cut and massive layoffs this year, and the state stepped in with a short-term, $35 million deal with funding from the state and county. The cash came only after a new labor deal was hammered out with the Amalgamated Transit Union Local 85, which would lead to $60 million in savings over four years.

Transit policymakers and advocates are cautiously optimistic. At the Port Authority, CEO Steve Bland says things are as quiet as they've ever been — which is a welcome change after a tumultuous few years. Bland says the agency is slated to receive additional funding of about $4.5 million from the county through the drink tax as well as an allotment from the Regional Asset District, through the agreement hashed out with the state in August. The state also agreed to pony up an additional $30 million; Bland says the agency has about a third of that in hand.

"We're obviously getting through the fiscal year fine," Bland says. Next fiscal year "is a more of an unknown." But Bland says he's "very optimistic."

Whatever Corbett's plan is, there's still likely to be a legislative battle over it. While many state Republicans and Democrats have expressed support for a funding package and introducing legislation that incorporates much of the transit commission's recommendations, hurdles remain.

"I resent my constituents paying higher gasoline tax so that we can keep small-system, fixed-route bus service that nobody uses and subsidize large systems that are already far cheaper than driving for their customers," he wrote.

Lawmakers say they are ready for the fight. State Rep. Dan Frankel (D-Squirrel Hill) plans to again introduce legislation for funding mass transit as he did last session. And he believes there's enough bipartisan support for a funding solution.

"Without detail, it looks to me like [Schoch] is describing a big vision and not a piecemeal approach," Frankel says. "If so, I'm encouraged."