Playing the blame game on vandalism

By Melissa Meinzer and Marty Levine 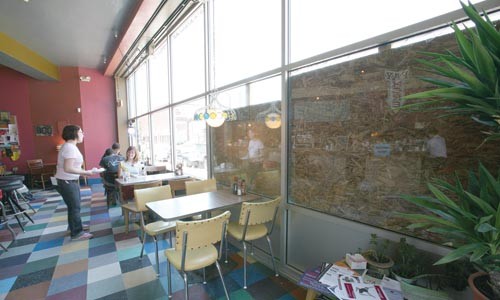 A recent spate of vandalism in the city's East End has kicked up a firestorm of controversy over what the crimes meant, who was responsible, and who has been blamed.

The incidents began early last Sat., June 2, with vandals smashing in the windows of the independently owned Quiet Storm Coffeehouse, in Friendship. Graffiti left behind at the scene included anarchist symbols, "Smash G8" and "Smash $" on a sidewall near a bike rack.

Next, the East End Food Co-op, a cooperatively run grocery store in Point Breeze, was struck twice. In the first attack, early Sun., June 3, three windows were smashed. A vandal was apparently injured on the glass and left blood at the scene. The vandals stenciled "There is no such thing as a good corporation. Stop buying and selling." The second time the Co-Op was hit was early Wed., June 6.

What, if any, relation the incidents at independent and corporate establishments have to one another is unclear. All bore anti-capitalist messages and coincided with the G-8 summit -- an annual gathering of the world's leading industrial nations, and a perennial cause for anti-corporate activism and protest. None of the incidents included robbery. Eyewitness accounts and surveillance video indicate that all the attacks were carried out by people in dark hoodies and bandanas.

But the choice of targets is confounding. The Quiet Storm and the Co-Op, as independent entities, seem to be odd choices for such political vandalism. References to the G8 summit -- often protested for insufficient action against poverty, AIDS, climate change and other ills -- and the timing of the incidents indicates that the vandalism did have a political motive, as does the anti-capitalist sentiment scrawled on the Co-op.

"What happened here is a bastardization of anarchist philosophy," says Jill MacDowell, proprietor of the Quiet Storm. Five days after the vandalism, the front windows were still covered in plywood, and the graffiti still stained the exterior walls of the coffee shop and vegetarian restaurant that, MacDowell says, is patronized by a number of people who identify themselves as anarchists. "It couldn't possibly be the work of an educated anarchist."

"You know, it doesn't make a lot of sense," agrees Rob Baran, general manager of the Co-op. "These are places where anarchists go. Anarchists go to the Quiet Storm. Anarchists go to the Co-op." The Co-op came under fire last year during stalled and ultimately failed attempts at unionizing. But, says Baran, the money it will take to replace the windows means less funds for profit-sharing with employees, so if the damage was meant as solidarity with workers, it backfired.

The attacks also took place almost exclusively in one council district: District 8, represented by Bill Peduto, who is often held up as a liberal on council.

While Peduto doesn't know the identities of the individuals involved, he blames the incidents on members of the Pittsburgh Organizing Group, a collective that organizes against the war in Iraq and military recruitment, among other causes. POG members "are the ones doing the damage in my council district," he says.

"There is a clear and definite pattern," says Peduto. "It would be irresponsible not to consider the possibility that it's POG, if it's people in black. There is a definite group of anti-G-8, anti-recruiting individuals who are vandalizing the East End." Peduto notes that in the past six months, several incidents of vandalism have occurred after POG demonstrations, mostly at recruitment sites.

"Absolutely not," says POG's Alex Bradley of the accusations that his group was somehow behind the smashing. "Personally, I have no idea who did it. We do not organize property destruction."

Peduto says he expects POG to characterize his assertions as unfair. He's been getting calls from POG members at his office calling for him to apologize and retract his statements to the media since a June 6 press conference.

"They're mad that I'm not responding," Peduto says. "The calls I received were more threatening than requesting. It's difficult to respond to anarchists."

POG does itself a disservice on two fronts in these incidents, the councilman says. First, violence and property destruction don't serve to advance any positive agenda, but merely to create problems for small-time property owners instead of fat-cat CEOs. "Their radical agenda has never been successful in bringing about social change."

Additionally, by tangling with him, they're creating friction between themselves and the person he calls their greatest ally in city government -- Peduto himself. "They're providing a wedge to drive me away from the Merton Center, the same people they're supposed to share ideals with."

Peduto says he hopes POG -- whose international ideals he says he often agrees with -- and the Merton Center will both publicly distance themselves from the vandalism.

In fact, on June 9, POG issued a statement denying it was involved with the actions: "The Pittsburgh Organizing Group did not organize the vandalism and the group involvement in any part of the action. POG is an above ground organization that holds public events and is frequently in the public eye. We do not organize property destruction or actions involving physical harm to humans or non-human animals. When we hold actions we report on them on our Web site, either before or after the fact.

"Councilman Peduto's comments at the June 6 press conference were highly irresponsible for a public official to make, detrimental to local movements for peace and social justice, and a slap in the face to those progressives who have previously considered him an ally."