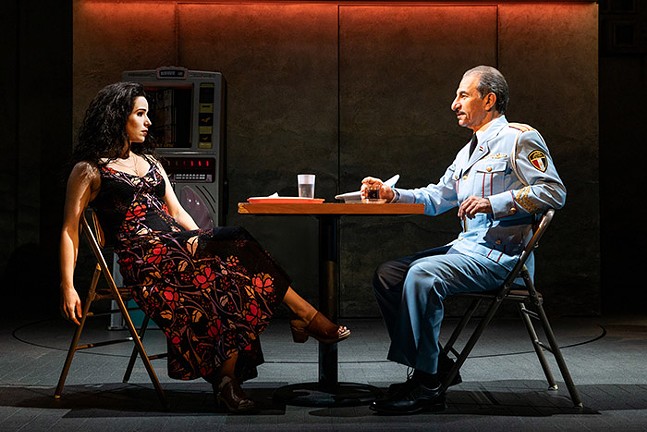 Photo: Matthew Murphy
The Band's Visit
Last night, Pittsburgh music fans witnessed one of the best concerts so far this year as a traveling Egyptian band visited the Benedum Center. Oh yeah, there was a story that went along with the show too, and a really funny, charming one to boot. But even if the PNC Broadway tour stop of The Band's Visit didn't include a great plot, stellar actors, and some pretty incredible soloists — which it, of course, did; it's a Tony-award winning musical, after all — the music? The music alone would have kept me there just as long.

You don't really need to know anything else. If you love musicals and need a laugh, go see this show. But if you insist on a longer review, well, here are 10 takeaways to help you make up your mind:

Best souvenir for sale in the lobby: A keychain in the shape of an oud, one of the Middle Eastern instruments played beautifully by the band throughout the performance.

Best prop: A phone booth. It symbolizes so much of the show's focus on hope, the passing of time, the painful yearning for something more ...

Best costuming: If you saw the posters for the tour, I bet you thought I was gonna say the band's sweet baby blue uniforms, but no. It was actually the gorgeous knitted sweaters (worn by the characters in the little Israeli town the band accidentally ends up in after getting on the wrong bus in the first scene of the show) that really made me swoon.

Photo: Matthew Murphy
The Band's Visit
Lyrics that got the biggest laugh: "If they have breasts and they're not my mother, then all I hear is [wooooooooooosh!]" Believe me, it's endearing when you hear it sung by Papi, a painfully shy young man who has no idea how to approach a woman.

Best set design: The turntable on stage. No, not a record player. A circular revolving section in the center of the stage, which this production uses creatively to move an actor quietly off stage and to quickly rotate sets. Even after the initial surprise of seeing the turntable remove the first actor wore off, it continued to impress throughout the performance.

Best audience member: The woman a few rows in front of me who was visibly having a hard time controlling her excitement; softly but enthusiastically clapping along and a few times, yelping out a few cheers in sync with the music.

Photo: Matthew Murphy
The Band's Visit
Best surprise: There's no intermission (make sure you hit the restrooms before the show), and the play is only 90 minutes long, so that means if you're seeing a 7:30 p.m. weeknight show, you'll be on your way home shortly after 9 p.m. (Or with plenty of time to have a nightcap before bed.)

Biggest relief when exiting the theater: Seeing "sanitation stations" with hand sanitizer and wipes by the exits. Because, let's be honest, nothing makes you more hyper aware of every single little cough in a crowded public theater than a global infectious disease. (Apologies to the person in front of me who visibly jolted when I was unable to stifle a cough of my own. Don't worry pal, just a little dry throat. Not coronavirus.)
UPDATE, Fri., March 13: The remaining performances of The Band's Visit have been canceled due to response to coronavirus. For our full list of canceled events, click here.