For one thing, this is a short show, coming in at around 60 minutes. And while there are hour-long plays that could take up a oodles of discussion time (anything by Beckett, for starters), Plateau isn't one of them.

Not that Payne necessarily means it to be. In a series of short, staccato scenes, the play follows the empty life and bleak times of Lillian Grey as she spends time, alternately, with her emotionally disconnected parents in a sterile suburban home, and in the unfeeling and relentlessly lethal outside world that is sometimes a school and sometimes a factory floor. But whether she's at home, work or school couldn't matter less, because Payne's point is that anywhere in the world is a fairly horrible place.

I'd be the last person to quibble with Payne's message, but I must say that the ground he's covering has been walked upon before, and on more than one occasion. I felt I had seen this play -- well, this type of play -- somewhere before, but I couldn't place it.

At first, Plateau feels like a throwback to theater from the '60s and '70s, when the cultural shifts in the larger world started turning up on smaller, less commercial stages -- specifically, all those urgent little dramas about the anesthetized ethos of suburbia, as well as stories about the dehumanization of "working for the man."

These aren't the most original of ideas, perhaps, but at least Payne isn't writing about suburban infidelity, bless his little soul. Also on the plus side is this Red Masquers production: John E. Lane, Jr. directs -- with an amazing cohesion -- this student cast, featuring Lacy Cunningham as Lillian, in a style of play that could stymie a seasoned cast with years more experience.

But I still couldn't name what was buzzing around in my head until it finally came in a flash: Elmer Rice's The Adding Machine, an Expressionist classic which features the same hideous home/soul-crushing job schematic, and is written in Payne's elliptical, minimalist style.

Or rather, Payne writes in the elliptical, minimalist style of Rice -- who, let's not forgot, was writing that way in 1923. I absolutely do not mean to suggest that Payne has tried to steal, or even copy, Rice's work -- my point is that if you're going to write for the theater, then knowing a bit of theater history isn't a bad thing. And, further, if you're going to write something similar to a theatrical classic, it's probably important that it's at least as good as the original. And Plateau really isn't.

It's not a bad play, certainly, and Payne's not without flair. But it's hard to talk about Plateau because any discussion would include earlier, and better written plays. I'd be very interested to see what happens when Payne moves out of the shadows of previous writers and creates something wholly his own.

It's actually cheering that Payne is worried enough about mechanization (both physical and emotional) that he's gone to the trouble of writing about it ... it's just unlucky for him that someone beat him to the punch so many years ago. 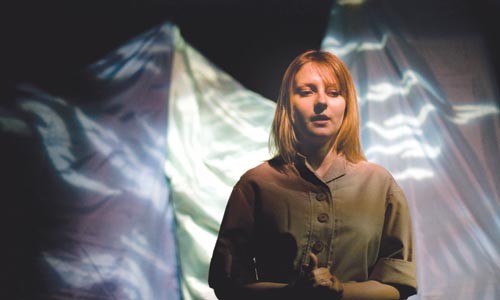