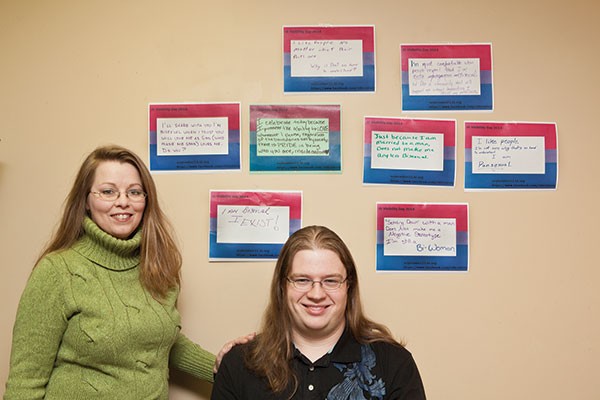 Indeed, statistics show that bisexuals have a higher rate of suicide attempts than their LGBT peers or straights, and that they experience poorer health and tougher lives in other areas.

The Williams Institute, a UCLA-based think tank focused on gender identity issues, estimates that there are nine million LGBT people in the U.S.; slightly more than half say they are bisexual. But according to the Movement Advancement Project (MAP), bisexuals are also six times more likely than others in the LGBT community to be closeted.

This hidden status has apparently led to a disproportionate amount of stress, worse health and higher rates of poverty among bisexuals. MAP found that bisexuals are four times more likely to have attempted suicide than heterosexuals — twice the rate of lesbians and gays. The Center for Disease Control and Prevention's National Intimate Partner and Sexual Violence Survey, still ongoing, has thus far found that more than half of bisexual women, as opposed to a third of lesbians and a quarter of straight women, have experienced some physical violence in relationships. The same proportions have experienced what the CDC classifies as "severe physical violence," while twice as many bisexual women (20 percent) as straight women have been raped by a partner. The incidence of stalking is also double for bisexual women compared to straight women. These incidents are more than twice as likely to be hate crimes, as classified by law enforcement, than such incidents against other LGBT people.

Bisexuals have higher rates of everything from hypertension, smoking and alcohol abuse to women's cancer. Studies in other countries have even turned up a higher incidence — four times greater — of post-traumatic stress disorder in bisexual women as are in straight women.

In 2010, Funders for LGBTQ Issues, which aims to prompt financial support for gender causes and research, charted the amount of grant money given to specific groups in the LGBT community since 1970. They found that, of the total of more than $487 million, $34 million went specifically to help gay men, $30 million targeted lesbian issues and nearly $17 million aided transgender or gender-nonconforming people — but just over $84,000 went to bisexuals, representing only 19 grants out of 21,794.

While gay men and lesbians are increasingly accepted in the mainstream, Paula Brewer's partner in founding the eBIcenter is still concerned enough to ask that only her first name, Carla, be used in the media.

"This is the first organization I have been involved with specifically for bisexuals, though I have been involved in the LGBT community for several years," Carla says. Not only is there prejudice in society against her sexual identity, she adds, but there is "bi-erasure and bi-denial."

"Bi-erasure occurs when someone who is bisexual is listed as either heterosexual or homosexual, usually based on the gender of their current partner, but it can happen in other situations as well. Bi-denial is the talk of bisexuality being just a phase or not being real." She hopes eBIcenter will "become a resource in the greater Pittsburgh community for bisexuals and a community organization where everyone feels welcome. I think it is important to create a space and events where discussion, education and acceptance can happen."

Ellyn Ruthstrom, president of the national Bisexual Resource Center in Boston, says curing "bi-invisibility" is crucial. "It's really important for bisexual people to find support groups and to find a sense of community. A lot of time people feel isolated in their own experiences."

"I thought I was straight until I was about 20," she says. "That's not that uncommon. Sexuality really is something that is not as cut and dry as most people like to think."

In 2013, she was one of the organizers of the first White House roundtable on bisexual issues. Organizing a local group, such as Pittsburgh's eBIcenter, should involve the entire GLCC, she advises, and eBIcenter members should in turn be involved in running broader LGBT activities.

"Don't just let the bi community take care of itself," she says.

When David Hines of Ambridge was growing up in conservative Somerset County, he remembers hearing "how sick or evil it was" to be gay. When his family moved to Florida in his 10th- and 11th-grade years, he discovered his attraction to boys.

"But I was still very seriously turned on by girls," he says. Then his family moved back to the Pittsburgh area before he had a chance to explore his identity.

At 25, he had his first relationship with a man.

"This is it," he realized. "I am bisexual. I am very comfortable with that."

Still, he says, it wasn't until he attended an eBIcenter meeting that he realized others' experiences were less positive. "I didn't really know how much of a blind eye is turned toward a bisexual orientation, particularly in the gay and lesbian community. After that, I decided to stick around and hear other people's stories."

"I guess I have a bit of a mission" now, he says. "Allowing people to be who they are, love who they want to love ... I'm going to help. It's nice to know that there is a support for it. I don't want to see anyone not accepted for who they truly are."

Concludes Paula Brewer: "The gay and lesbian community for a long time said not coming out, staying in the closet, is the equivalent of death. We encourage anyone who can safely come out to come out. It's a healthier way to live. But you have to have community before you can come out in a safe way."