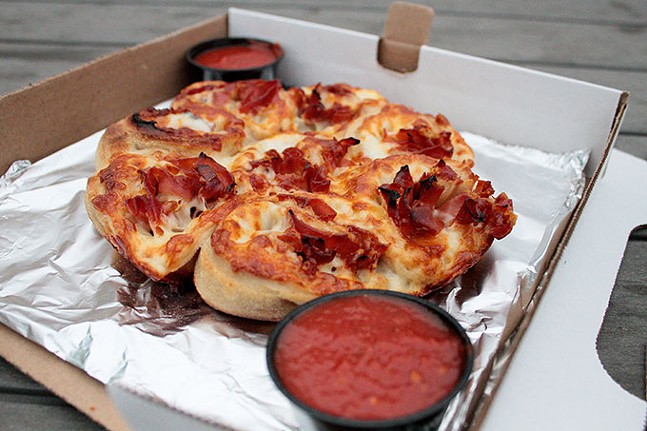 In 2016, Dave Anoia started selling pizza during the day at his Strip District spot, DiAnoia’s Eatery, and his "old world" style pies – cheese under sauce – became a big hit. DiAnoia’s pizza was in high demand.

In May, Anoia and his team finally gave into Pittsburgh’s call for more and opened Pizzeria Davide, dedicated entirely to DiAnoia’s famous pies.

The new pizzeria is located less than a block away from its sister restaurant, but service-wise, it’s the polar opposite. There’s no table service and no wine poured tableside — there aren’t even front doors. The takeout-only spot features a fenced-in dining area equipped with picnic tables and a walk-up window for ordering.

The pizza, thankfully, hasn't changed. Anoia makes his pies with the same three-day fermented dough recipe that propelled DiAnoia’s pies to celebrity status. This 72-hour process makes for a thin crust that's sturdy and incredibly flavorful. It’s strong enough to hold sauce and toppings, but isn’t so thick it overpowers the pizza.

If cheese before sauce doesn’t sit right with you, Pizzeria Davide’s other specialty is New York-style pizza: cooked red sauce topped with provolone, mozzarella, oregano, and parmesan. The menu also includes two other Italian classics marinara (no cheese) and margherita (mozzarella and basil), alongside two white pizzas, one topped by mortadella, truffle ricotta, hot peppers, and pistachio, the other featuring cacio e pepe (cheese and pepper), broccoli, and pancetta.

Out of the pizzeria’s signature styles, N.Y. and old world, I preferred the New Yorker. When the old world pie was matched with spicy soppressata and mushrooms, I was inclined to pick up a second slice. But plain, it was unexpectedly dull.

The N.Y. pie was almost too big to fit in my front seat. The box was gigantic, and even still, the pizza barely fit into its container. Each slice was exactly what it should have been: thin with a wider, chewy crust that had a bit of char on the edges and almost as big as my head. The cheese bubbled down, and the sauce was warm, a dusting of oregano and salty parmesan adding the perfect zing.

Pizza may be the star of Anoia’s menu, but it isn’t the only option. If you’re looking for a Philly cheesesteak, Anoia’s comes as close as you can get without leaving Pittsburgh. The sandwich was picturesque. It had all the traditional features: a roll that wasn’t too crusty but soft enough to absorb some grease, meat tossed with fried onions, and cheese whiz (not from a can, Anoia makes his by hand).

The final draw of DiAnoia’s menu was the meatball bomb, a mozzarella-wrapped meatball covered and baked in pizza dough. It was, quite literally, a bomb of flavor. Two sauces — marinara and pesto — smothered Anoia’s meatball. It was a classic, no-frills meatball, cooked to perfection.

The subject of Pittsburgh pizza is hotly debated, but it’s clear that the city pizza lovers can all agree on one thing: Dave Anoia makes great pizza. 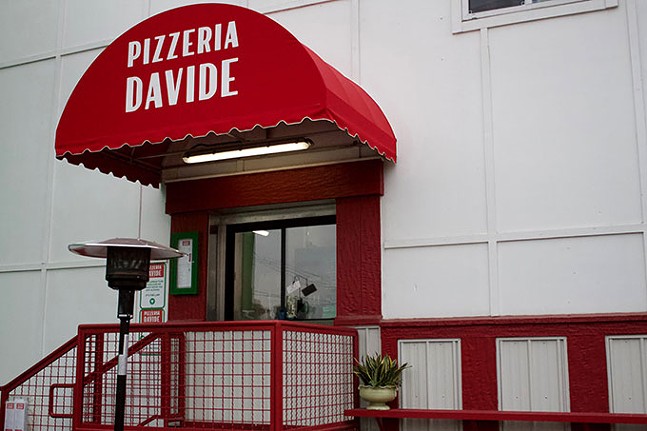 The pizzeria’s dip menu is as impressive as its food menu, with spicy ranch, garlic butter, ranch, pepper relish, and more.

Grab a six-pack to-go or sit and enjoy a can of wine after you order.

DiAnoia's old-world pizza gets its own home with Pizzeria Davide