“I don’t have to worry about making it taste good because this lamb already tastes so good on its own.” 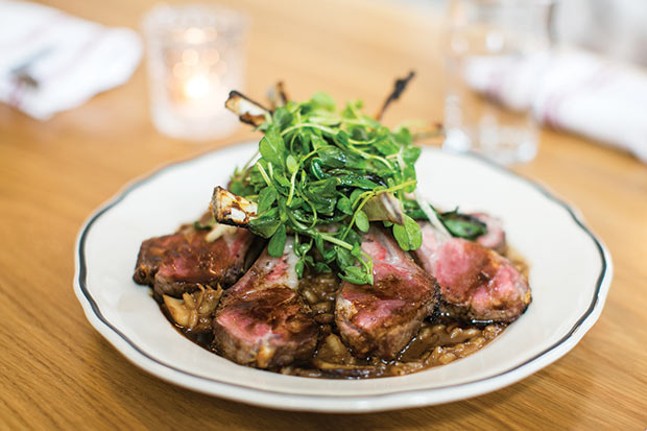 Just outside of Pittsburgh, there are thousands of acres of farmland dotted with farmers raising some of the highest-quality meats, organic vegetables and cheeses in the country.

For restaurants that want to make use of the local bounty, it’s a great culinary advantage to have these farms so close by. Jamison Farm in Latrobe, for example, has been raising lamb since 1976 that the New York Times lauded as some of the country’s best. Bethany Zozula, the executive chef at the Whitfield inside the Ace Hotel and James Beard Foundation 2018 semifinalist for Best Chef in the Mid-Atlantic, has long worked with Jamison’s lamb and wanted to bring it to her kitchen in East Liberty. So, in January, she started lamb dinners that focus on using the whole animal.

Zozula took the helm as executive chef at Whitfield when it opened in 2016, but her career started in the early 2000s at the former Mountain View Inn in Greensburg where she first worked with Jamison Farm lamb.

“I’ve always really liked Jamison lamb. The farm and hotel are in Westmoreland County and the chefs there always used it and I always loved it,” says Zozula, who also has a personal connection with the family. “I grew up in the cooking world with them and I worked with their daughter at Mountain View. I went to ballet school with her and didn’t even realize it. I feel like I’ve grown up with them in my cooking. It’s familiar.” As the sous chef at Eleven, she continued to work with their meats and also became acquainted with Jubilee Hilltop Ranch beef, which she now also uses in her butchery program at the Whitfield.

When Zozula and Paul Sale, the corporate chef for the Ace Hotel group, were initially developing the menu for the opening, it didn’t have lamb on it. “I really wanted [lamb] so I [added] a lamb carpaccio and we did lamb sausage once in a while,” she says. Then Zozula reconnected with Sukey Jamison and started buying lamb necks, which sold well, even at the highest price point on the menu. To lower the price and make it more accessible to diners, Sale suggested a special menu. Zozula was already doing whole-animal butchery for the Jubilee Hilltop beef, so she decided to try the same approach with the lamb. She tried a couple of special menus late last year and now the kitchen is pushing forward with twice-monthly lamb dinners on Wednesdays. The lamb items are offered as a la carte specials in addition to the regular dinner menu.

Now every other week, the Whitfield kitchen receives two whole lambs from Jamison Farm, which are butchered in-house. In 2017, Jamison was recognized as the Conservation Farmer of the Year by the Westmoreland Conservation District for their grazing practices. Their flocks are grass-fed and eat an all-natural diet while ranging free in the fields.  Each menu is built around the number of cuts available and seasonal preparations. The menu features a handy (and cute) drawing of a lamb with lines to denote where each cut comes from and as the night progresses servers monitor how many of each dish is still available.

But using the whole lamb can be a challenge.

“In the beginning we played with a lot of things, trying to use up the other parts like the scraps, the leg and the shoulder; being smart about it and not wasting it, it’s definitely a project to do it,” she says. A few months in, Zozula is finding it easier to fold in the butchering and preparation with the rest of the kitchen work. She also uses the lamb menus to help develop the regular dinner menu.

“We’ll put a dish together around the lamb and then perhaps that dish will become the vegetarian entree once the lamb is gone,” she says. “Lamb feels special to people. I don’t have to worry about making it taste good because this lamb already tastes so good on its own.”