"The ability to have all these artists in one place at one time really creates a strength." 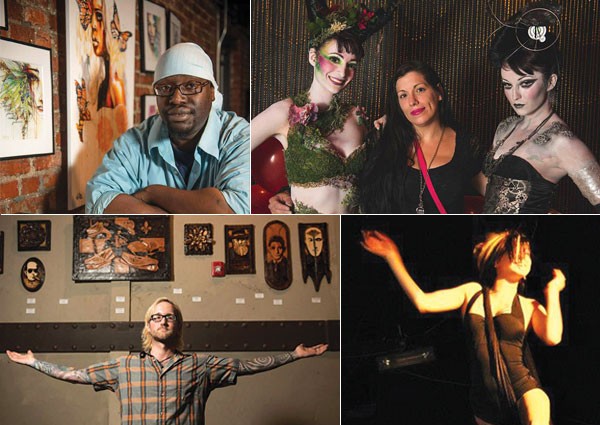 The series is a platform for underground visual and performing artists who might not have shown their work to a larger audience.

"We're here to guide them through the process and give them a real experience with having their own (and sometimes first ever) show," writes RAW founder Heidi Luerra, who's based in Los Angeles. "We're here to help because there is a gaping hole between just starting out in your career and getting signed to a record label or making it into a gallery."

Most RAW events are in the U.S., Canada and Australia. Nationally, RAW has drawn attention from culture outlets like Flavorpill and 303 Magazine, and even Lifetime's Project Runway. In Pittsburgh, RAW is held at Cavo, a Strip District club. The event calls for fashionable attire, and attendees definitely dress to kill: From edgy fashionistas to streetwear stars, the typical 500-plus crowd looks like something out of a Brooklyn loft party.

The multi-genre showcases feature visual artists, musicians, fashion designers, dancers and filmmakers, as well as hair and makeup artists. The idea is to bring artists into a supportive community across the network of cities.

"The arts scene in Pittsburgh is nothing like, say, New York," says RAW's Pittsburgh showcase director, Leigh Yock (also co-founder of locally based promotional company Nakturnal). "But there are a lot of avenues in Pittsburgh for artists. I just think that this is another avenue and it's doing it in a more unique way. ... The ability to have all these artists in one place at one time really creates a strength."

Since launching, in February, RAW has showcased 222 local artists. For the Nov. 22 RAWards, 27 semi-finalists — three artists from each of nine categories — have been selected via online voting and local judges' picks. The judges choosing winners Nov. 22 include: Veronica Corpuz, who directs the Three Rivers Arts Festival; Renee Piechocki, director of the city's Office of Public Art; and Adam Welch, curator at Pittsburgh Center for the Arts.

Winners from all RAW cities will be entered into an online database for final judging by industry professionals. The top contestant in each category goes to Los Angeles for the national RAWards ceremony, in December.

Some controversy attends the RAW format. Artists are either recruited by organizers like Yock, or apply online. But to actually participate, artists must either sell 20 tickets at $10 a piece or else pay $200.

Critics call this aspect "pay-to-play," and it disturbs some in the local music scene.

After the first few RAW shows, Icon complained on Facebook about the format. Joining the thread were several promoters, musicians and even festival organizers.

But Icon eventually attended a RAW event and now says, "I had a great time, saw a lot of people I know. And then I performed once and did sound for a band. ... I think they're doing a really good job."

She adds that she no longer considers RAW pay-to-play: "It's not like a battle of the bands."

In an email Yock shared with City Paper, Luerra rejected the pay-to-play label. "Events are just one single part of what we encompass. We use the ticket method because we know that artists don't have a lot of disposable income. If they can't afford to participate by paying a fee — which most cannot (all that we do does cost money at the end of the day) — they can work for it instead, hence crowd-funding their cost to participate. ... We do this to make it easy."

Aside from hosting the event, RAW organizers invite gallery owners, industry professionals and the media. Artists also get professionally produced video content of themselves, an updatable profile page on the RAW website and contacts with RAW organizers elsewhere.

RAW "also forces the artist to market themself," says an artist who goes by the name Ms. Dingo, and who participated in October's RAW event. She recently moved back to Pittsburgh after a stint in New York, where she had a few gallery shows.

"In a lot of instances, the gallery you're showing at is out there spreading the work for you, and it's kind of like RAW is doing that," she says. And RAW "allows you to connect with all the other artists who are involved."

"It's not just the exposure they're getting," says Yock. "It's also about finding them opportunities."