Pittsburgh’s urbanized areas are the oldest, whitest, and most native-born in the nation | News | Pittsburgh | Pittsburgh City Paper

Pittsburgh’s urbanized areas are the oldest, whitest, and most native-born in the nation 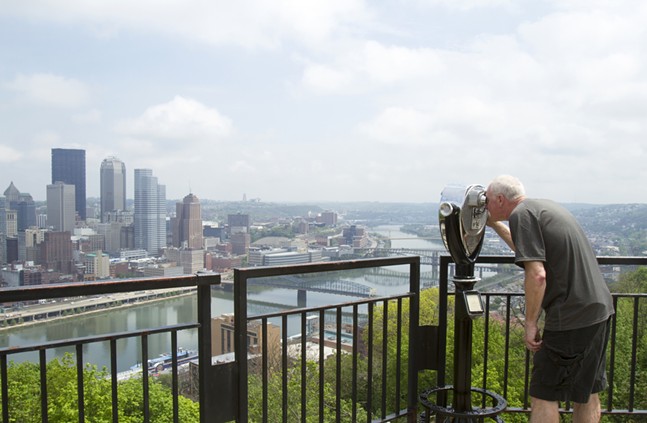 While new industries like tech, education, and medicine have led the Steel City to an economic rebound and to the region’s culture diversifying with new ethnic restaurants, festivals, and youthful energy, the most recent census figures show we still have a lot of catching up to do compared to other cities.

When looking at metro areas urbanized sections, the Pittsburgh area is the oldest, whitest, and has the least foreign-born residents of the largest 30 metro areas in the U.S.

The U.S. Census Bureau defines urbanized areas as densely developed territory that encompasses residential, commercial, and other non-residential urban land uses. These areas have more than 50,000 people or 2,500 people per cluster. Basically, it's everything excluding rural, sparsely populated townships and areas like forest land.

According to census figures, Pittsburgh’s urbanized areas have a median age of 42.1 years, and is older than the Tampa, Miami, and Cleveland area. This high average age has been a large factor in keeping Pittsburgh’s regional population stagnant for years. There are many more thousands of people dying each year in the region than people being born. The youngest large urbanized metro in the country is Riverside-San Bernardino, Calif., with a median age of 31.8 years.

“In summary, it shows that the declining age profile is very much concentrated in the city,” says Briem. “Some counties, Westmoreland and Fayette for example, have only continued to get older and are among the older metropolitan counties in the nation.”

He notes that Westmoreland County growing age is likely tied to its lack of people moving there. Westmoreland County has the highest percentages of residents born within their home state in the country. The growth and youthful dynamism of other regions across the U.S. is primarily driven by migration, both domestic and international.

And this leads to another low ranking for Pittsburgh: foreign-born residents. Only 4.7 percent of residents of Pittsburgh’s urbanized areas are foreign-born, the lowest in the country. Young metro areas like Houston and San Diego have more than five times as many immigrants, as a percentage of their populations.

And on the flip side, Pittsburgh’s urbanized area is also the whitest in the country, which is both a reflection of low immigrant population and middle-of-the-road amount of Black residents. More than 82 percent of our urban and suburban areas are white, while 9.8 percent of those areas are Black and 8 percent are other races.

“All of these metrics are pretty much variations on a theme and interconnected,” says Briem.

The urbanized large metro that is the second most white is Cincinnati, at 75.4 percent white. Pittsburgh also suffers from some of the worst racial inequality in the nation. As documented by the Pittsburgh Post-Gazette, the Pittsburgh region has been shedding Black residents, who have been migrating to other cities like Atlanta and Charlotte, usually citing a lack of opportunity for Black people in the Steel City.

On top of all that, our urbanized areas are also the second least dense, just ahead of Atlanta at 1,920 people per square mile. Briem says the decades of stagnant population growth might explain the low density. Many other grown metros have developed a lot more of their empty land close to cities, thus increasing their densities.

“Only a few specific areas of the nation are truly built out to the point that you can’t find land for new residential development,” says Briem. “For Pittsburgh, I'm not sure it is worthy of making too much of our low relative ranking on density in and of itself, but I don't think it is as much about decline in former industrial towns as just the lack of net population growth over many decades. Two sides of the same coin in a sense.”