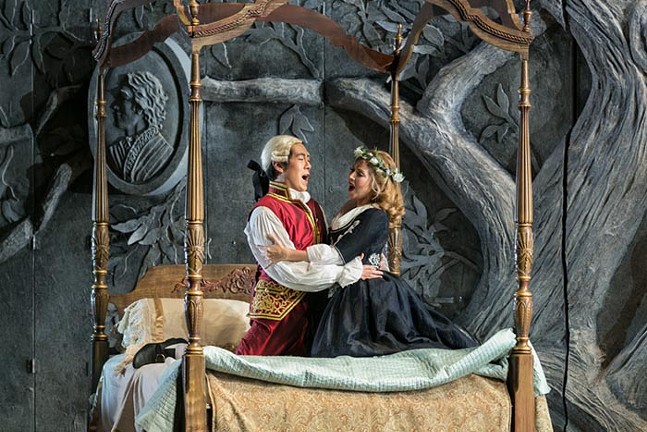 STAGE • IRL
Venture under the sea with Disney’s The Little Mermaid at Byham Theater. Presented by Pittsburgh Musical Theater, and adapted from the 1989 Disney film, the musical explores mermaid Ariel’s journey to reclaim her voice with the help of underwater friends Flounder the fish, Scuttle the seagull, and Sebastian the crab. The students of PMT’s conservatory will perform the show as the CAPA orchestra brings Alan Menken’s timeless music to life. This classic story by talented young performers will have you singing “Part of Your World” all the way home. 10 a.m.-5 p.m. Continues through Sun., Nov. 6. 101 Sixth St., Downtown. $19.50-56.50. pittsburghmusicals.com/mermaid

ART • IRL
If you have yet to experience the 58th Carnegie International exhibition at the Carnegie Museum of Art, a great way to begin is by meeting the artists and curators. Refractions, a series of talks, performances, and readings related to the show, will welcome artist Tishan Hsu and associate curator Ryan Inouye. Hsu, who created a commissioned piece for the Carnegie International, will discuss his process as a multimedia artist working in traditional painting and sculpture and new media. 6:30-7:30 p.m. 4400 Forbes Ave., Oakland. Free. Registration required. cmoa.org

DANCE • IRL
Dance Nation, the new Pitt Stages play at Charity Randall Theatre promises to explore the fierce world of competitive dancing. The work conveys the freedom of movement against the quickly changing lives of a group of pre-teen performers. Written by Clare Barton, the play has racked up a handful of awards since its creation, including being a finalist for the 2019 Pulitzer Prize for Drama. Check out this passionate story of “ambition, growing up, and how to find our souls in the heat of it all.” 2 and 8 p.m. Continues through Sun., Nov. 13. 4301 Forbes Ave., Oakland. $15-25. play.pitt.edu/production/dance-nation

STAGE • IRL
Halloween may be over, but Prime Stage Theater still wants some time with a classic monster from literature and film. The company kicks off a new season with a world-premiere production of Frankenstein at New Hazlett Theater. Adapted by sci-fi/mystery author Lawrence C. Connolly and directed by Liam Macik, the show will follow young Mary Shelley as she conceives “one of the most suspenseful stories ever written.” 8 p.m. Continues through Sun., Nov. 13. 6 Allegheny Square East, North Side. $19-39. primestage.com

STAGE • IRL
Roger Guenveur Smith has performed his one-man show Frederick Douglass NOW on Martha’s Vineyard, a site where the famous subject spoke 145 years earlier. Now, the award-winning playwright and actor will bring the production to the August Wilson African American Cultural Center. A press release describes the show as combining “jazz-infused original narrative” with “Douglass' classic texts,” bringing back to life the powerful words of a man who escaped slavery and spent his life fighting to end the practice. See what the Los Angeles Times describes as a “short, sharp solo piece” that “makes a striking statement about where America has come and still has to go in terms of race.” 7 p.m. 980 Liberty Ave., Downtown. $47.25-57.25. awaacc.org

MUSIC • IRL
Musician Loudon Wainwright III draws from his decades-long career and two dozen albums for a new show at the Kelly Strayhorn Theater. Known for his work on the TV show M*A*S*H and as the father of singer Rufus Wainwright, Worainwright’s music has been covered by giants like Johnny Cash and Bonnie Raitt. His most recent album, Lifetime Achievement, saw him return to the spared-down musical style that first made him popular in the 1970s. Don’t let this performance from a folk legend pass you by. 7:30 p.m. 5941 Penn Ave., East Liberty. $18-40. kelly-strayhorn.org

MUSIC • IRL
Get so emotional when Hard Rock Cafe presents a Sunday Jazz Brunch saluting the work of the late Whitney Houston. The powerhouse performer, whose voice defined an entire generation of pop and R&B, and who produced chart-topping movie soundtracks for The Bodyguard and Waiting to Exhale, will receive a tribute from saxophone player Tony Campbell and friends. Get ready to relive all those times you wailed Houston’s rendition of “I Will Always Love You” while enjoying a variety of brunch options. 12 p.m. Doors at 11 a.m. 230 West Station Square Drive, South Side. $12-72. hardrockcafe.com/location/pittsburgh

FEST • IRL
The University of Pittsburgh’s annual Slovak Heritage Festival celebrates 32 years this month with a celebration at the Cathedral of Learning Commons Room. Chow down on Slovakian foods like Klobasa, Halušky, and Pirohy, the Slovak name for pierogies. Guests will have the opportunity to purchase traditional Eastern European crafts from vendors as well as create their own. There will also be a number of educational lectures, so you can leave with a full stomach and a greater understanding of Slovakian culture. 12-4 p.m. 4200 Fifth Ave., Oakland. Free. slavic.pitt.edu/events/32nd-annual-slovak-heritage-festival

EVENT • IRL
Feeling spacey? Check out NASA’s InSight Mission: Journey to the Center of Mars at Carnegie Science Center. Dr. Bruce Banerdt, a planetary geophysicist at NASA, will give a lecture on the progress of InSight, a robotic lander that touched down on Mars in 2018 with the aim of studying the planet’s terrestrial formation. The data from InSight will provide crucial information about an “Earth-like planet that has gone through most of the evolutionary stages of the Earth.” 7-9 p.m. One Allegheny Ave., North Side. Free. Registration required. carnegiesciencecenter.org

OPERA • IRL
Not all opera is tragic. Described by Pittsburgh Opera as “one of the most popular comic operas of all time,” The Marriage of Figaro promises “amusing cases of mistaken identity and romantic subterfuge, plus music by a Mozart at the height of his powers.” Taking place at the Benedum Center, the production follows the titular Figaro as he and his love Susanna teach their employer, the Count Almaviva, a lesson for trying to invoke the disgusting right of “droit de seigneur” on their wedding night. Don’t miss this production of one of the most popular operas of all time. 7 p.m. Continues through Sun., Nov. 13. Seventh St. and Penn Ave., Downtown. $7.50-164. pittsburghopera.org

EVENT • IRL
Steel City Storytellers is back for the October installment of their spoken word series with the theme Pittsburgh Potpourri. Taking place at Kingfly Spirits, the night will be emceed by Steel City Storytellers founder Angelo Creo, who tells stories of “the wacky, the weird, and the wonderful” experiences in his life. Grab a cocktail or two and settle in for a night of storytelling straight from ordinary Pittsburghers. 7:30-9:30 p.m. 2613 Smallman St., Strip District. $12. kingflyspirits.com