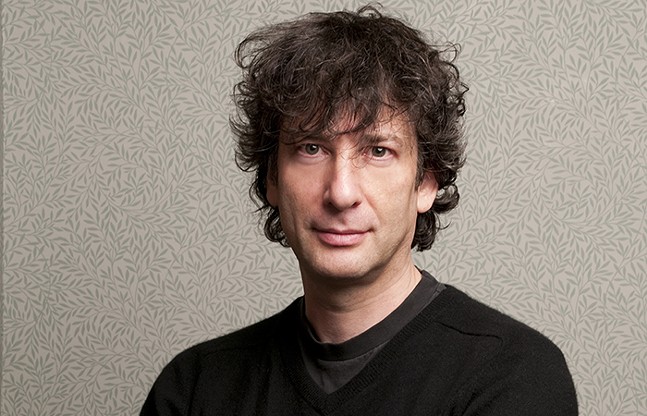 LIT • IRL
Pittsburgh fantasy fans will hear from one of the genre’s most successful and celebrated authors when Neil Gaiman presents a talk at Carnegie Music Hall of Oakland. For decades, Gaiman has entranced readers with his imaginative, award-winning tales, many of which have been adapted into film and television shows, including Good Omens, American Gods, and Coraline. Presented by Penguin Bookshop. 7:30 p.m. 4400 Forbes Ave., Oakland. $48-58. penguinbookshop.com

FILM • IRL
The Party for Socialism and Liberation in Pittsburgh will present Struggles in Steel: A Story of African-American Steel Workers as part of its Liberation Film Nights. Co-directed by Ray Henderson and Tony Buba, the film takes viewers to Pittsburgh-area steel towns, notably Braddock and Aliquippa, to “document the history of the contributions made by African Americans not only to the Steel Industry, but to the labor movement itself.” The event will take place at the Pittsburgh Liberation Center and includes a Q&A with Buba. 6 p.m. 733 N. Highland Ave., Highland Park. Free. Donations accepted. facebook.com/pghpsl/events

COMEDY • IRL
Return to the days of unsupervised, after-school fun when Arcade Comedy Theater presents The Latchkey Kids Go To The Movies. Featuring local comedy group The Latchkey Kids, the event is described as a variety show full of “improv, live music, stand-up comedy, and vintage videos” from the 1980s up through 2002. Laughs will be provided by The Latchkey Kids as well as guest improvisers Jennifer Holz, Amy Ream, and Max Rubinstein. Proof of COVID-19 vaccination and face mask are required upon entry. 8 p.m. 943 Liberty Ave., Downtown. $10-15. 16 and up. arcadecomedytheater.com

DRAG • IRL
So tell me what you want, what you really, really want. You wanna go to Spice Night at Blue Moon, a drag celebration of Ginger, Scary, Baby, Sporty, and Posh. Enjoy the Spice Girls as portrayed by Alora Chateaux, Leia Way Lestat, Dixie Surewood, Cindy Crotchford, and Tootsie Snyder. And remember to bring plenty of bills to tip the performers. 11 p.m. 5115 Butler St., Lawrenceville. Free. 21 and over. bluemoononbutler.com

OUTDOORS • IRL
Bike, walk, scoot, or skate your way through the South Side and Downtown when OpenStreetsPGH once again takes over Pittsburgh neighborhoods. Organized by Bike Pittsburgh, the event reimagines streets as “places for people,” temporarily closing roads to car traffic and inviting the public to enjoy music, games, dancing, and other activities hosted by various local organizations. There will also be food, prize giveaways, and more. 10 a.m.-2 p.m. Various locations, Downtown and South Side. Free. openstreetspgh.org

MARKET • IRL
Refresh your wardrobe, grab a gift ahead of Father’s Day, or buy a little something for a friend during the Made & Found Summer Market at Spirit. Check out items by 30 vintage dealers, makers, and artists from throughout the region during an outdoor event (weather permitting) in Spirit’s garden and parking lot. Choose from handmade leather goods, jewelry, quality second-hand clothing, and more. 11 a.m.-5 p.m. 242 51st St., Lawrenceville. Free. spiritpgh.com/events

EVENT • IRL
See marching bands, dogs, classic cars, local sports mascots, and more during the annual Memorial Day Parade in Lawrenceville. Touted as one of the longest-running parades in the country, the event includes 65 groups gathering together to honor war veterans. The parade kicks off at 36th Street and Butler Street and ends at the Allegheny Cemetery, where more than 15,000 veterans are laid to rest. There will also be a memorial tribute service at the Cemetery’s Soldiers Memorial. 10 a.m. 36th and Butler St., Lawrenceville. Free. alleghenycemetery.com

ZOO • IRL
Summer is finally here, and the Pittsburgh Zoo and PPG Aquarium is celebrating with its Opening Season Parade. Crowds can expect costume characters and other surprises during what is being described as an “all-new, bigger parade.” Guests should post up along the parade route, which runs from the Forest Passage and travels along the Zoo path, ending on the Kids Kingdom patio, so they won’t miss any of the action. 11 a.m. 7370 Baker St., Highland Park. Included with regular admission. pittsburghzoo.org

LIT • HYBRID
Get ready for another round of local lit when White Whale presents the Hemingway's Summer Poetry Series. Hear selections from Diana Khoi Nguyen, Halsey Hyer, Adam Matcho, Ellen McGrath Smith, and Arlene Weiner during an event taking place in person and over livestream. The series will continue at White Whale every Tuesday for eight weeks from May through August. 7:30-8:30 p.m. 4754 Liberty Ave., Bloomfield. Free. Registration required. whitewhalebookstore.com

FILM • IRL
Spend an evening with a cult classic when Smiling Moose hosts Bad Movie Bingo: Serial Mom. Written and directed by John Waters, the 1994 film stars Kathleen Turner as an average suburban woman who loves her family, community, and killing anyone who gets on her nerves. Presented by Neo Trash Video, the event includes a screening of the film along with giveaways and a grand prize at the end. 8 p.m. 1306 E. Carson St., South Side. Free. facebook.com/NeoTrashVideo

THEATER • IRL
Pittsburgh Public Theater pays tribute to late playwright August Wilson with a production of his 1990 work Two Trains Running. The sixth entry in his 10-part Pittsburgh Cycle series takes place in 1969 at the height of the Civil Rights movement as lead character Memphis “faces a battle of his own in Pittsburgh where the city wants to raze his Hill District restaurant for an urban renewal project,” according to a release. PPT describes Two Trains Running as a “wise, funny, and achingly beautiful play that’s brimming with local history and legendary language.” Staging at the O'Reilly Theater. 8 p.m. Continues through Sun., June 19. 621 Penn Ave., Downtown. $32-80. ppt.org