MUSIC • IRL
Have your voice ready for the Independence Day Hamilton Sing-Along. Presented by NonStop Broadway and Hard Rock Café, the event invites guests to belt out tunes from the hit show about America’s Founding Fathers. If you are more of an observer, you can watch your friends or family put on a special show. Something like this only comes around once a year, so make sure you bring your entire crew. 7 -10 p.m. 230 W. Station Square Drive, South Side. $5, $10 to sing. facebook.com/NonStopBroadway

EVENT • IRL
Pittsburgh will be overrun with visitors in animal suits when Anthrocon returns to the David L. Lawrence Convention Center. After being put on hold by the pandemic, one of the most anticipated events in the city will deliver a long weekend of workshops, parties, vendors, and other happenings dedicated to the furry lifestyle. Be ready to ask for selfies with the myriad of anthropomorphic fursonas you will soon encounter Downtown. Continues through Sun., July 3. 1000 Fort Duquesne Blvd., Downtown. $60-70. anthrocon.org

EVENT • IRL
Interested in mingling with other environmentally like-minded individuals? BrewDog Pittsburgh is hosting an event by Green Drinks Pittsburgh, where you can have a drink and learn about local environmental causes and environmentally focused professionals, or just make new friends. Everyone is welcome to this non-partisan event and you’re encouraged to bring friends. Ray Roberts of Citizens’ Climate Lobby will be at the event, where you will be able to hear about how an average citizen can make a difference as a lobbyist. 6-8 p.m. 6144 Centre Ave., Shadyside. Free. facebook.com/greendrinks412

MUSIC • IRL
Pittsburgh Playhouse once again welcomes Chatham Baroque for Alchemy for Three, an evening of classical music highlighting songs, dances, and sonatas spanning the 17th and 18th centuries. For this installment, the trio — which includes Andrew Fouts on violin, Patricia Halverson on viola da gamba, and Scott Pauley on theorbo and baroque guitar — will play selections from Corelli, J.S. Bach, Schmelzer, Matteis, and others. 4:30 p.m. 350 Forbes Ave., Downtown. $25. playhouse.pointpark.edu

MARKET • IRL
The PGH Flea Night Market returns to Garfield with a wide variety of vendors selling plants, vintage clothing, jewelry, decor, and more. Shop from Root Forge, Pip & Lola's, Frankenpins, and other local vendors. Get a reading from The Golden Deer Tarot or check out secondhand items from Bad B**** Thriftin'. It all takes place indoors diagonally across from People's Indian Restaurant. 5-8 p.m. 5150 Penn Ave., Garfield. Free. facebook.com/The.PGH.Flea

FILM • IRL
If you like hardboiled detectives, femme fatales, and high-contrast lighting, head to Parkway Theater for Noir Night Out: D.O.A. Presented by Jump Cut Theater, the event will combine dinner with a screening of a 1949 film about a businessman who must find out who poisoned him before it’s too late. Dinner will consist of a hot dog bar with a wide selection of toppings, as well as vegan and vegetarian options. If you’re interested in drinks, the event will also include a full bar. 5-8 p.m. 644 Broadway Ave., McKees Rocks. $15 with dinner, $8 movie only. jumpcuttheater.org

STAGE • IRL
Shakespeare is coming to Dormont thanks to the New Renaissance Theatre Company. The company, with a mission to connect the classic to the contemporary “through ensemble-based development and performance,” will bring its Unrehearsed Shakespeare Project tour to the Dormont Borough Building to present the Shakespearean comedy The Merry Wives of Windsor. The tour will continue through July 10 at various locations throughout the Pittsburgh area. 5 p.m. 1444 Hillsdale Ave., Dormont. Free. Donations accepted. newrentheatre.com

EVENT • IRL
Make a trip out to the Meadowcroft Rockshelter and Historic Village for its Independence Day Celebration. Enjoy pastimes that were played hundreds of years ago with Games on the Green. Go back in time and witness the reading of the Declaration of Independence. Finally, before you leave, do not forget to explore the archaeological wonder that is the Meadowcroft Rockshelter. 10 a.m.-4 p.m. 401 Meadowcroft Road, Avella. $7-15 for adults, free for children 6-17. heinzhistorycenter.org
click to enlarge 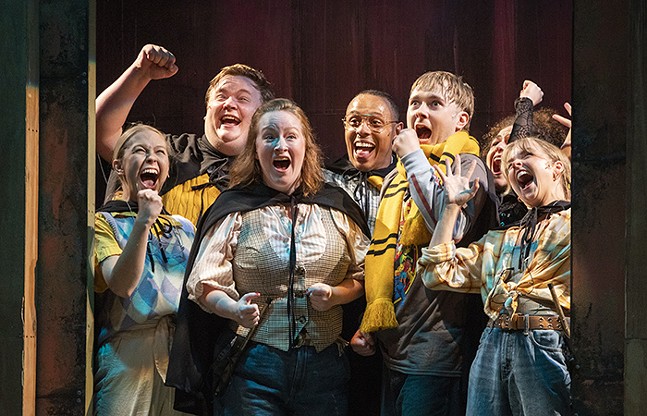 STAGE • IRL
Harry Potter fans should know that the Pittsburgh CLO production PUFFS takes a different approach to the mega-hit wizard franchise. Taking place at the Greer Cabaret Theater, the show follows three House Hufflepuff students as they try to survive a magic school that “proves to be very dangerous for children,” according to a description. See Hogwarts through a very different lens during this stage comedy, which offers performances tailored for kids 8 and up and audiences 13 and up. 2 p.m. Continues through July 31. 655 Penn Ave., Downtown. $29-65. pittsburghclo.culturaldistrict.org

Photo: Dweck Productions
Anna Cobb in We’re All Going To The World’s Fair

FILM • IRL
Due to a certain recent Supreme Court decision, some people might not feel particularly patriotic this Independence Day. If you’re not in the mood to do the usual cookouts or fireworks shows, retreat to the quiet of a movie theater when Row House Cinema screens We’re All Going to the World’s Fair, the debut work by trans/nonbinary filmmaker Jane Schoenbrun. The film follows a teen girl as she becomes consumed with an online role-playing horror game, resulting in what a Pittsburgh City Paper review called “less of a straight horror film than a film about the different shapes horror takes in our lives.” 5:10 p.m. Continues through Thu., July 7. 4115 Butler St., Lawrenceville. $12.84 plus fees. rowhousecinema.com
click to enlarge

SPORTS • IRL
Are you an amazing bowler? How about after the lights go out? Stonewall Sports, a community-based nonprofit dedicated to LGBTQ sports leagues, invites everyone to have a good time and eat plenty of fresh snacks during The Fruit Bowl-Cosmic Bowling at AMF Bowling Co. The event will have a whole table of fruit-focused dishes to enjoy between frames as teams compete for a variety of prizes. 7:30 p.m. Check-in at 7 p.m. 2440 Noblestown Road, Crafton. $10. facebook.com/StonewallSportsPgh

ART • IRL
Songbird Artistry presents Truth Be Told: An Artful Gathering of Women, an exhibition showcasing 14 female polymer clay artists, seven of whom are Black and seven white. As described on the Songbird website, the show was inspired by monthly talks in which the featured artists discussed issues related to the death of George Floyd and the 2020 protests. Each piece was inspired by certain words relating to the discussions. Continues through Aug. 13. 4316 Penn Ave., Lawrenceville. Free. songbirdartistry.com

MUSIC • IRL
Be there when Roger Waters kicks off his This Is Not a Drill tour at PPG Paints Arena. In a press statement, Waters calls the show a “groundbreaking new rock and roll/cinematic extravaganza” and “a stunning indictment of the corporate dystopia in which we all struggle to survive.” The statement also suggested that this might be the Pink Floyd co-founder’s last tour, so don’t miss this one. 8 p.m. 1001 Fifth Ave., Uptown. $32.25-255.25. ppgpaintsarena.com