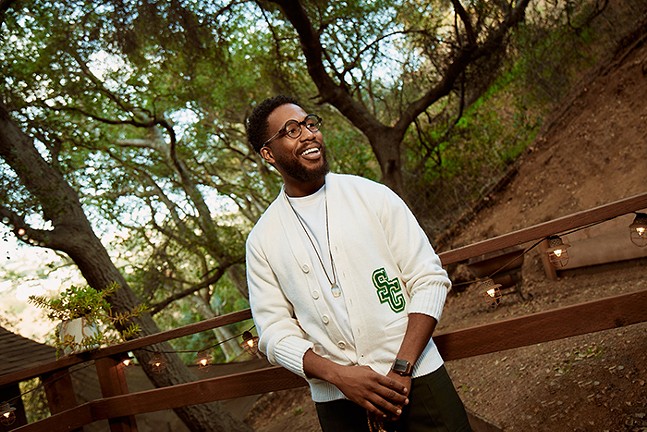 MAGIC • IRL
Sonic the Hedgehog is not the only one with rings. For over 20 years, magician Joshua Messado has been performing the art of linking rings for audiences all over the world, from Hollywood to Canada to Germany, and now Pittsburgh. Come see Messado perform both magic and comedy during his show Ringistry at Liberty Magic. The Pittsburgh Cultural District describes the show as an “hilarious and engaging premier performance,” so prepare to laugh and be amazed. 7:30 p.m. Continues through Sun., June 19. 811 Liberty Ave., Downtown. $40-75. trustarts.org


PRIDE • IRL
Pittsburgh Pride Revolution and AIDS Free Pittsburgh kick off Pride Month with rapper Saucy Santana during Too Hot For July. Taking place outside KLVN Coffee Lab, the street party includes a vogue dance battle, cash prizes, and free HIV and STD testing. The event is meant to honor those living with, lost to, and affected by HIV and to also educate about prevention and treatment. Concessions will be offered by KLVN, Spirit, Goodlander, Secretos, and Deez Concessions. 5-11 p.m. 6600 Hamilton Ave., Larimer. Free. lgbtqpittsburgh.com

FEST • IRL
The Dollar Bank Three Rivers Arts Festival has moved to a new location, but its mission of showcasing amazing visual art, live music, and other works remains the same. Head to the Downtown Cultural District for 10 days of events, kicking off with performances by Grammy award-winner Cory Henry and Pittsburgh teen pop sensation Lindsay Liebro, as well as shows at various galleries, works of public art, selections from the Afronaut(a) film series, and more. There will also be tons of unique items to see and buy at the Artist Market and kid-friendly activities in the Giant Eagle Creativity Zone. 12-9 p.m. Continues through Sun., June 12. Various locations, Downtown. Free. traf.trustarts.org


PRIDE • IRL
The first time is always memorable, so be there for the first annual Pride on the Shore Festival at Stage AE. This one-night music festival features performances by big-name acts like Jessie J, Monique Heart, Pennywild, and more. There will also be DJs, drag queens, and a can’t-miss main event. If that was not enough entertainment for you, head to the after-party featuring some special guests. 6 p.m. 400 N. Shore Drive, North Side. $64-89. VIP and after-party 21 and over. prideontheshorepgh.com

DANCE • IRL
Confluence Ballet Co. presents Versatile Voices at Kelly Strayhorn Theater. The company aims to illustrate the diversity of its woman-run company and celebrate the “expansive and imaginative power of a woman’s voice.” Besides the show, patrons can also purchase art created by the dancers and other products from local female-run businesses. All proceeds from the show, featuring dancers Meghan Phillips, Kaila Carter, and Julia Erickson, will go towards the Confluence Ballet Co. 7:30 p.m. 5941 Penn Ave., East Liberty. $22-35. kelly-strayhorn.org 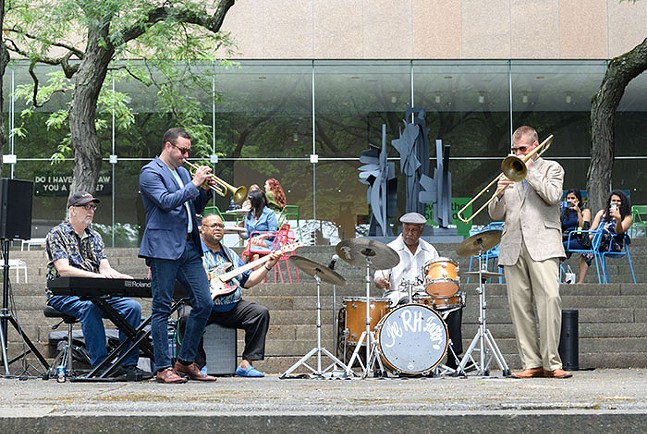 Photo: Bryan Conley
Inside Out at Carnegie Museum of Art

ART • IRL
Carnegie Museum of Art brings back Inside Out, the free outdoor summer event series taking place every Thursday night and Saturday through mid-August. The series kicks off with a sneak peek of artist Rafael Domenech’s work for the museum’s upcoming 58th Carnegie International. From there, every Thursday will serve as an “after-work destination” showcasing the city’s vibrant nightlife scene with DJs, food trucks, and drinks. Every Saturday will delight families with live performances and art-making activities. 12-5 p.m. Continues through Aug. 13. 4400 Forbes Ave., Oakland. Free. cmoa.org/inside-out

COMICS • IRL
It is time to dress up as your favorite superhero again. 3 Rivers Comicon is back with two days of family-friendly, pop culture-infused fun at the David L. Lawrence Convention Center. Nerd out with panels, exhibits, vendors, and more. Nobody is leaving empty-handed, especially one lucky winner who could pocket $1,000 at this year’s cosplay contest. Don’t forget to bring your Thor Hammer or Lasso of Truth. 10 a.m. Continues on Sun., June 5. 1000 Fort Duquesne Blvd., Downtown. $4.99-9.99 for kids, $15.99-44.99 for adults. 3riverscomicon.com


PRIDE • IRL
Neighborhood Pride events are taking place all over Pittsburgh this month, and Swissvale is no exception. Presented by the trans resource nonprofit SisTers PGH, Swissvale Pride is being touted as “the first Pride event ever held” in the community. The day begins with a parade running from Edgewood Town Center and ending at Dickson Elementary School, where attendees can experience a music festival headlined by singer, songwriter, and trans rights activist Shea Diamond. 10 a.m.-9 p.m. 1763 S. Braddock Ave. and 7301 Schoyer Ave., Swissvale. Free. sisterspgh.org/2022-swissvale-pride

COMEDY • IRL
Randy of the hit Canadian series Trailer Park Boys is coming to Pittsburgh and bringing his cheeseburgers with him. Enjoy a night of laughter and food, and possibly become a part of the show when Thunderbird Cafe and Music Hall presents the Randy’s Cheeseburger Picnic Tour. Be sure to come hungry, and relive some of your favorite Trailer Park Boys moments as Randy, AKA actor Patrick Roach, presents a combination of stand-up, contests, and more. 8:15 p.m. Doors open at 7 p.m. 4053 Butler St., Lawrenceville. $25. Meet & greet passes $25. thunderbirdmusichall.com

EVENT • IRL
You have heard the hits of the iconic glam rock band Queen, but have you heard them with lasers? The Carnegie Science Center will present Laser Queen in its newly renovated Buhl Planetarium. Watch a light spectacle choreographed to hits like “Under Pressure,” “Another One Bites the Dust,” “Bohemian Rhapsody,” and “Crazy Little Thing Called Love.” 2 p.m. One Allegheny Ave., North Side. $2-8. carnegiesciencecenter.org

LIT • IRL
Writers will go hard during the Steel City Grand Slam, described as bringing 13 of the city’s top poets together to “battle it out” for a chance to represent Pittsburgh in a regional tournament. Taking place at City of Asylum’s Alphabet City venue, and presented by the Pittsburgh Poetry Collective, the event offers the chance to see all the “amazing and diverse performance poets” Pittsburgh has to offer. 7-9 p.m. 40 W. North Ave., North Side. $10. cityofasylum.org

ART • IRL
Cinzia Campolese has made a name for herself on an international level, with exhibitions and other events throughout Canada, Europe, and Asia. Her first United States show is now on display in the Wood Street Galleries, offering interactive installations, optical illusions, and other works described as revolving around “the concepts of presence and perception of space in both digital and physical environments.” The six pieces use a variety of media, including video and lighting, as well as materials like steel and glass, to question modern reality. 11 a.m.-6 p.m. Continues through Sun., June 26. 601 Wood St., Downtown. Free. trustarts.org