PARTY • NORTH SIDE
Celebrate the various communities that make up Pittsburgh during a holiday event at the Andy Warhol Museum’s Pop District. The Pittsburgh Metropolitan Area Hispanic Chamber of Commerce, along with several other organizations, will present a Holiday Fiesta full of music, food, and fun. Sample cuisine by La Palapa and enjoy a live performance by Noel Quintana & the Latin Crew. The event is underwritten by local African-American and Asian Chambers of Commerce, the Professional Women's Network, and other community organizations. 5:30-8:30 p.m. 106 Isabella St., North Side. $30-40. pmahcc.wildapricot.org

DRAG • MILLVALE
Get festive during the Harold’s Haunt Holiday Special, a drag queen extravaganza with live performances from Jenny Sais Quoi, Alexandria Star, Venus Doom, and Andi Whorehol. Plus, Pride Millvale will announce the dates for their 2023 Pride events. Get there early to claim a seat at the self-described “Ghostly They-Bar” of Millvale. 6-11 p.m. 142 Grant Ave., Millvale. $5. 21 and over. instagram.com/that_jsq

MARKET • SHADYSIDE
Support local artists during a special market at the Pittsburgh Center for Arts and Media. The Winter Artists Market will feature handmade gifts representing a long list of media, including glass, ceramic, fiber art, print, and more. Sate your appetite with food and drink by Farmer x Baker and Trace Brewing, and check out the grand opening of the Center’s new retail space. 10 a.m.-4 p.m. 1047 Shady Ave., Shadyside. Free. pghartsmedia.org

MUSIC • EAST LIBERTY
Canadian band The Slocan Ramblers bring their banjos and mandolins to Kelly Strayhorn Theater. Known for blending traditional bluegrass with a willingness to experiment, the four-piece band has “become a leading light of today’s acoustic music scene,” according to their website. The band’s fourth album, Up the Hill and Through the Fog, pulls from the chaos of the past two years to create intimate compositions that “chart a more hopeful case forward.” Presented by Calliope House. 7:30 p.m. 5941 Penn Ave., East Liberty. $21-41. kelly-strayhorn.org

COMEDY • DOWNTOWN
Kids in the Hall fans should head to Arcade Comedy Theater for an original production by cast member Kevin McDonald. According to the Arcade website, Half a Play will begin as a “meticulously scripted affair.” The second half will unfold based on audience participation, as McDonald and various Arcade performers improvise based on volunteered ideas and suggestions. This is a one-night-only performance, so don’t miss it. 7 p.m. 943 Liberty Ave., Downtown. $15-20. 16 and over. BYOB. arcadecomedytheater.com/events

SPORTS • UPTOWN
The Pittsburgh Penguins face off against the Dallas Stars in the annual Pride Game at PPG Paints Arena. Proceeds from fundraising will go towards local and national LGBTQ organizations, including the You Can Play Project, and the Hugh Lane Wellness Foundation, which offers HIV services and civil legal aid to western Pennsylvania’s LGBTQ community. Buy a Pride Puck or T-shirt at the game to show your black, gold, and rainbow support. 7 p.m. 1001 Fifth Ave., Downtown. $39-75. pittsburghbuffalopride.com

MUSIC • DOWNTOWN
A holiday tradition returns to Pittsburgh when the Mannheim Steamroller Christmas Tour takes over the Benedum Center. For 35 years, Grammy Award-winner Chip Davis has performed Christmas classics in the distinctive Mannheim sound across America. The show celebrates over three decades since the group’s first Christmas album and features multimedia effects to bring the holiday music to life. Experience the spirit of the season through the music that revolutionized the sound of Christmas. 8 p.m. Seventh St. and Penn Ave., Downtown. $45-85. trustarts.org

MUSIC • DOWNTOWN
There are few professional Black female jazz violinists in the world, and one, Regina Carter, has built a reputation as one of the best. The Grammy Award nominee, MacArthur Fellow, and Doris Duke Award recipient was recently chosen as a Jazz Masters Fellow by the National Endowment for the Arts, which applauded her “mastery of the violin and exploring the instrument’s possibilities in jazz, as well as taking journeys in other genres of music” Carter will play at the August Wilson African American Cultural Center as part of the Uhuru Jazz Sessions. 7 p.m. 980 Liberty Ave., Downtown. $25. awaacc.org 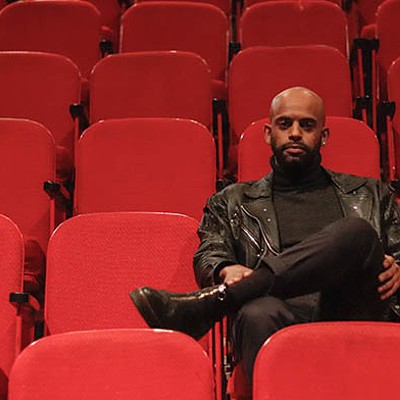