PARTY • IRL
Get outside before the weather turns cold with the Summer at the Square block party at Mellon Square. Presented by the Pittsburgh Parks Conservancy, the outdoor event includes live music by local artists, food specials from Italian restaurant Talia, adult beverages, and large lawn games, all in a Downtown urban park built above a parking garage. 5:30-7:30 p.m. 540 Smithfield St., Downtown. Free. pittsburghparks.org

STAGE • IRL
Author F. Scott Fitzgerald’s classic novel moves from the shelf to the stage when Carnegie Stage presents its production of The Great Gatsby. Nick Caraway will be your gateway into the extravagant lives of his cousin Daisy Buchanan, Jay Gatsby, and others during this Jazz Age drama. Take a wild ride without leaving your seat. 7 p.m. Continues through Sat., Aug. 27. 25 W. Main St., Carnegie. $15-20. carnegiestage.com

MUSIC • IRL
Bassist and songwriter Thundercat rose to prominence with his third album Drunk, defined by Pitchfork as a 23-track “opus” that plays like the “aural equivalent of late-night channel surfing.” Beyond his indefinable, genre-spanning work, he has also collaborated with the likes of Kendrick Lamar and Pittsburgh’s own Wiz Khalifa, among many others. Experience this one-of-a-kind talent when he plays live at Stage AE. 7 p.m. 400 North Shore Drive, North Side. $32.50-85. promowestlive.com/pittsburgh/stage-ae 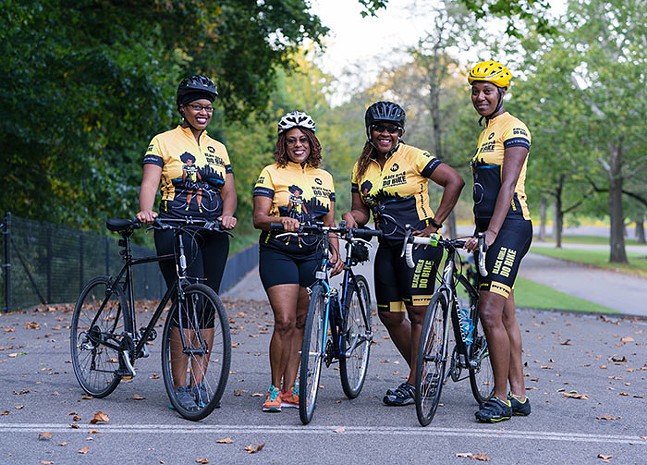 EVENT • IRL
Join Black Girls Do Bike for its National Meetup and a bike ride like no other. Black Girls Do Bike is a community of women of color who bond over their love for cycling. Start off with a luncheon and pool party at the Sherwood Event Center where there will be giveaways, entertainment, and more. The weekend will take participants on a 20-mile ride across the city, beginning at the Westin Hotel on Saturday, and to Pedal Pgh, Pennsylvania’s largest bike ride, on Sunday. 2-6 p.m. Continues through Sun., Aug. 28. Various locations. $20 for luncheon and pool party, free for bike ride. blackgirlsdobike.org

ART • IRL
Looking for a new piece to add to your art collection? Described by the Pittsburgh Center for Arts & Media as a “half yard sale, half art show,” the yART Sale serves as a market for artists to clear out their studios by selling any works, materials, or other items they no longer use or need. Support local artists while finding some true originals in the process. 10 a.m.-4 p.m. 1047 Shady Ave., Point Breeze. Free. pghartsmedia.org/yart

PARTY • IRL
Level Up Studios and The Dreamz of Music Network invite the community to The Level Up Block Party, a day filled with live music and dance, vendors, food trucks, DJs, and more. The Rhythm of the Night fusion band, DoeBoy$, and Tyree Drake are just the tip of the iceberg as over 30 acts will take the stage at what’s dubbed as “Pittsburgh's creative playground.” Start off outdoors and then move inside once the sun goes down to enjoy some indoor entertainment. 12 p.m.-12 a.m. 4836 Penn Ave., Garfield. Free. Registration required. facebook.com/DreamzofMusic

MUSIC • IRL
Summer Sounds, a free event series presented by Hazelwood Local and Weather Permitting, returns to Hazelwood Green Plaza with plenty to enjoy. If the weather holds up, Pittsburghers will be able to jam out with Grammy-nominated musician Cheick Hamala Diabate. While you’re checking out the music, your kids will be over by the screenprinting station, touring the Fusion Mini-Museum, or checking out the Water Blaster Station. Plus, all can satisfy their styles and appetites by purchasing food and art from vendors. 5 p.m. Lytle and Eliza streets, Hazelwood. Free. facebook.com/HazelwoodLocal

COMEDY • IRL
The Comedy Central series Drunk History has covered American cities with the help of many inebriated entertainers. Arcade Comedy Theater puts a spin on that concept by looking at the history of Pittsburgh as a town partly defined by its relationship to alcohol. The Comedy Walking Tour: Pittsburgh's Drunken History introduces guests to the many real-life characters who, over the centuries, have contributed to this reputation during a 45-minute tour of the Penn Avenue corridor. Tours at 12:30 p.m., 1:30 p.m., and 2:30 p.m. 943 Liberty Ave., Downtown. $20, free for children under 5. All ages. arcadecomedytheater.com/events

LIT • IRL
History class did not teach you everything about Pittsburgh. Ed Simon, author of An Alternative History of Pittsburgh, is here to change that. Did you know about the attempted assassination of Henry Clay Frick? How about the legends of Joe Magarac? Join Simon at Andrew Carnegie Free Library & Music Hall as he tells some of those unheard tales. 7-8 p.m. 300 Beechwood Ave., Carnegie. Free. Registration recommended. carnegiecarnegie.org/upcoming-events

FILM • IRL
Bad Movie Bingo will make you confront your fear of snakes and bad CGI with a screening of Anaconda at Smiling Moose. The event combines BINGO with Neo Trash Video riffing on the 1997 horror film about a group of nature documentarians who tangle with a giant, bloodthirsty serpent in the Amazon jungle. The star-studded cast, which includes Jennifer Lopez, Ice Cube, and Owen Wilson, probably want to forget ever being involved in this turkey. 8 p.m. 1306 E. Carson St., South Side. Free. 21 and over. facebook.com/NeoTrashVideo

LIT • HYBRID
Maud Newton and Geeta Kothari both have novels about family life. However, each takes a different path. Newton’s Ancestor Trouble dives into her fascinating, sometimes shocking family history. Kothari’s I Brake for Moose and Other Stories looks at immigrants struggling with the sacrifices and realities of the American dream. Experience these authors and their work when City of Asylum presents the event Writing About Family. 7-8:30 p.m. 40 W. North Ave., North Side. Free. Registration required. cityofasylum.org

MUSIC • IRL
Twenty One Pilots — or twenty øne piløts, depending on what you read — will celebrate the 2021 release of their album Scaled and Icy at PPG Paints Arena. The Icy Tour brings the duo to the stage for a night dedicated to their alt hip-hop, electronic-driven music. Experience why this Ohio-based group became a Grammy Award-winning, multi-platinum, history-making music act. Also includes a performance by Peter McPoland. 8 p.m. 1001 Fifth Ave., Uptown. $37-123. ppgpaintsarena.com

LIT • HYBRID
White Whale welcomes editor and writer M.E. O'Brien for the launch of her new book Everything for Everyone: An Oral History of the New York Commune 2052-2072. Co-written with Eman Abdelhadi, the latest work by O'Brien, whose stated mission covers “creating trans communist horizons,” is described as “a window into a possible future and a powerful antidote to our present moment’s ubiquitous moods of anti-utopianism, despair, nostalgia, and capitalist-realism.” Joining O'Brien is Alex Colston, a freelance editor and co-director of The Psychosocial Foundation. 7-8 p.m. 4754 Liberty Ave., Bloomfield. Free. Registration required. Livestream also available. whitewhalebookstore.com/events