FILM • IRL
Tull Family Theater will set out to prove that mushrooms are for more than just eating in this educational screening. Directed by Louie Schwartzberg, Fantastic Fungi: The Mushroom Movie features scientists and mycologists speaking on what the “fungi kingdom offers in response to some of our most pressing medical, therapeutic, and environmental challenges.” The documentary is described as an “immersive journey through time and scale into the magical earth beneath our feet, an underground network that can heal and save our planet.” 1:30 p.m. 418 Walnut St., Sewickley. $8.75-33.75. thetullfamilytheater.org

THEATER • IRL
The stage adaptation of Disney's 1992 film Newsies comes to the Little Lake Theater. Based on the real-life 1899 newsboy strike, the musical follows Jack Kelly, the charismatic leader of a band of teenage “newsies.” When faced with the rising prices of publishing, Jack rallies his newspaper-selling pals to protest against the unfair conditions. Don’t miss Little Lake’s production of this hit, family-friendly Broadway show. 7:30 p.m. Continues through Sun., May 8. 500 Lakeside Drive South, Canonsburg. $15-25. littlelake.org

MUSIC • IRL
Head to the Thunderbird Cafe and Music Hall for a special night of tribute acts. The DJam: Grateful Dead Tribute & Benefit Show will feature Jeff Mattson and Lisa Mackey from Dark Star Orchestra. Proceeds from the event will benefit Just Harvest, a Pittsburgh-based nonprofit dedicated to addressing hunger in Allegheny County. There will also be an opening acoustic set by Pittsburgh jamband theCAUSE, so head over to Thunderbird to show support for local artists and a good cause. 7:30 p.m. Doors at 6:30 p.m. 4053 Butler St., Lawrenceville. $20. thunderbirdmusichall.com LIT • IRL
Celebrate Independent Bookstore Day at City of Asylum with writer-in-residence Tuhin Das, who will sign copies of his new book, Exile Poems. The day will also be filled with surprise discounts, blind dates with a book, free raffles, and exclusive merch like an “Indie Bookstores Are My Jam” mug and an Independent Bookstore Day pencil, tote bag, and key tag. 12-6 p.m. 40 W. North Ave., North Side. Free. cityofasylumbooks.org

COMEDY • IRL
Horror films made legends out of so many actors — Bela Lugosi, Christopher Lee, Jamie Lee Curtis, Colin Hanks. … Wait, Colin Hanks? While the talented son of beloved star Tom Hanks may not be a horror icon, he will dip into the genre during The Colin Hanks Short Film Festival: Horror at Arcade Comedy Theater. Curated by Hanks, the event is described as bringing comedians together to “create movies that have never been seen before and will never be seen again.” 8 p.m. 943 Liberty Ave., Downtown. $10-15. 16 and up. arcadecomedytheater.com

EVENT • IRL
The Polish Hill May Day Parade returns after a two-year pandemic break. Besides celebrating the coming of spring, May Day also honors international workers and immigrant rights. Put on by the Polish Hill Civic Association, the parade will start at Melwood Avenue and stop at West Penn Park, where the celebration will continue with a community cookout. Participants are encouraged to dress up and bring floats, banners, flowers, or whatever else feels festive. Masking and social distancing are encouraged for all attendees. 12 p.m. 610 Melwood Ave., Polish Hill. Free. facebook.com/phca.pittsburgh

EVENT CANCELED DUE TO WEATHER
East End Brewing will combine shopping with food and beer during Spring Crafts and Drafts. This outdoor market will feature goods and vintage items from small businesses in the region. Check out Triple Moon Alchemy, an herbal apothecary, screenprinted artwork by Vanessa Adams, vintage vinyl from Flipping Records and Tapes, sustainable clothing and accessories made by Otto Finn, and more. You can also enjoy a beer from East End or a non-alcoholic beverage from Live Fresh Cold Pressed Juice. 2-6 p.m. 147 Julius St., Larimer. Free. facebook.com/EastEndBrewing 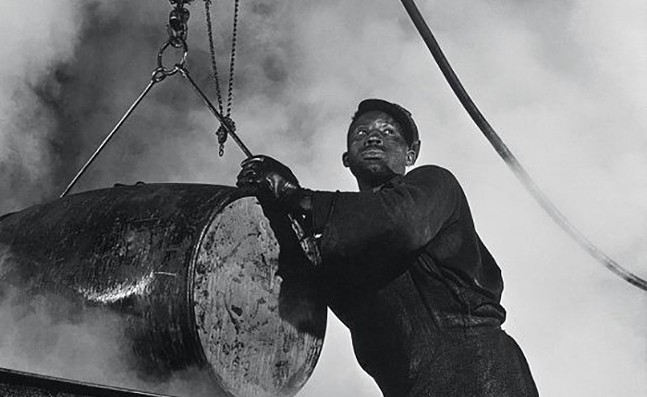 Photo: Prints and Photographs Division, Library of Congress, Washington DC, Courtesy of the Gordon Parks Foundation
Gordon Parks in Pittsburgh, 1944/1946 at the Carnegie Museum of Art

ART • IRL
Few photographers captured Pittsburgh’s industrial past quite like Gordon Parks, and now audiences can experience his talent during a new exhibition at the Carnegie Museum of Art. Gordon Parks in Pittsburgh, 1944/1946 is described as showcasing “a previously unexplored body of the acclaimed photographer’s work, capturing an indelible view of World War II–era Pittsburgh.” The more than 50 photographs on display depict workers at the Penola, Inc. grease plant, a local facility that produced essential goods to U.S. troops during the war. Continues through Aug. 7. 4400 Forbes Ave., Oakland. Included with museum admission. cmoa.org

LIT • HYBRID
Despite progress, the working lives of women continue to be fraught with gender pay gaps, discrimination, and lack of support, especially for mothers. Four women decided to address this by forming the “No Club,” where they “banded together over $10 bottles of wine to get their work lives under control.” Now, the women will launch their book The No Club: Putting a Stop to Women’s Dead-End Work during a Pittsburgh Arts & Lectures event at the Carnegie Library Lecture Hall. Get more insight on what’s being described as a “practical, timely guide for bringing gender equity to the workplace.” 6 p.m. 4400 Forbes Ave., Oakland. Free. Registration required. pittsburghlectures.org

MAGIC • IRL
Naathan Phan has set out to earn the title The Polymath of Magic, combining illusion with acting, singing, storytelling, and improvising, as well as vocal mimicry — he can even mix you a cocktail. See Phan at Liberty Magic as he demonstrates the wide range of skills that led to him being featured on TV shows like Masters of Illusions and America’s Got Talent. This is Phan’s Liberty Magic debut, so be sure to check out this “multi-disciplinary tour-de-force by a passionate, sincere, preeminent showman.” 7:30 p.m. Continues through Sun., May 29. 811 Liberty Ave., Downtown. $40-65. trustarts.orgUPDATE: The Last Podcast on the Left event, previously scheduled for Fri., April 29, has been postponed.