“And then all of a sudden we started to think, ‘Should we be giving a shit too?’” 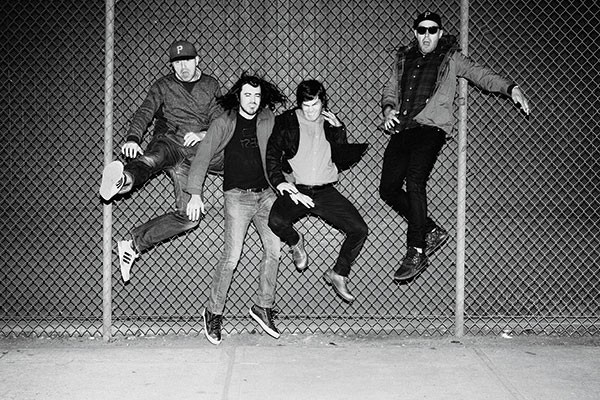 Photo courtesy of Shawn Brackbill
“It just does what it does”: The Gotobeds

After the Gotobeds’ recent experience of being courted by a record label, Eli Kasan, the band’s guitarist and vocalist, sees a similarity between music-industry people and oil speculators, both of whom are never sure if they’ll strike it rich or lose money. “What do you think you’re going to get out of this, especially when we’re being wild as fuck,” Kasan asks rhetorically, referring to the band’s live set.  “I don’t know what you think you’re going to do with this. We can’t steer it in any direction, other than the way it’s going. There’s no cleaning up for this. It just does what it does.”

After releasing the album Poor People Are Revolting in 2014 on 12XU (an independent label run by Gerard Cosloy, also of Matador Records), the band received some prime exposure on NPR’s First Listen. For a band without heavy support from a public-relations company, or even a manager, this high-profile moment was an anomaly and generated a well-deserved buzz for the band’s fresh, two-guitar take on post-modern punk rock. Who should come knocking but Sub Pop, the iconic Seattle label responsible for nurturing everyone from Nirvana to the Fleet Foxes and Father John Misty.

The opportunity felt a little dicey in the early stages. The night they were scouted at a New Orleans performance, the only audience member paying attention to the band was the Sub Pop rep — and he was on the phone during the set. “I remember being onstage and looking at everyone [and thinking], ‘We’re blowing this,’” Kasan says, with a laugh.

But this is a band that plays with the same reckless abandon whether being scouted by a label or slaying friends with a show at Gooski’s. A few months after the New Orleans show, Sub Pop founder Jonathan Poneman came to see the band at a New York show and Kasan felt bold enough to give him a good-natured heckle from the stage. “We hadn’t signed the contract yet and I gave him a maniac speech. ‘Send us the check, give us more money.’ I berated him,” Kasan says. “And then he came backstage and bought us a bunch a drinks!” Sure enough, that brashness helped ink a two-record deal with Sub Pop, who released the new Blood // Sugar // Sects // Traffic last week.

Sitting together at Gooski’s, the four Gotobeds seem as impressed with the new-found attention as anyone else might be. It seems like they’d be doing the same thing regardless of who released their music. “It was always like, ‘We didn’t give a shit, we’re having fun playing the local scene,’” says drummer Cary Belbeck. “And then all of a sudden [we started to think], ‘Should we be giving a shit too?’ I always kept thinking, ‘Let’s just keep doing our thing.’”

What impressed them was the freedom Sub Pop gave them. “They didn’t say no [to anything]. We said, ‘We’re going to make videos. We’re going to do the artwork. We’re going to record in Pittsburgh,’” Kasan says. “They heard the record [and] they made no weird comments. For them to be that big and … to be so supportive, it’s fucking great.”

To its credit, the band comes out swinging on Blood // Sugar // Sects // Traffic and doesn’t let up for 39 minutes. Kasan’s and Tom Payne’s guitars play off each other, sometimes harmonizing, sometimes tossing melodies back and forth. At one point, the guitars’ single-note lines and Gavin Jensen’s driving bass evoke Joy Division, to a degree. But therein lies the appeal of the Gotobeds: They’ve digested classic punk sides from Mission of Burma, the Fall, Pavement and others. What they play has the same amount of fury as those predecessors, but it still feels fresh and vital. With Kasan wailing and barking his abstract lyrics, the band is rooted in current times.

The group plans spend up to seven weeks on the road. Beyond that, the members are realistic about the album’s potential. “The impression I’ve gotten from anyone at any label is that it’s all guesswork. Nobody knows what’s going to do well or not do well,” Kasan says.