“This is a sport where your body is valuable for what it is.” 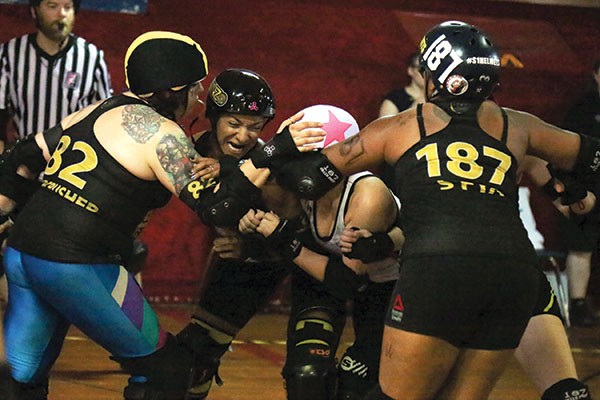 CP photo by Stephen Caruso
The Steel City Roller Derby faced Toronto in their last game of the travel season on Aug. 20.
With its hard hits, clever player pseudonyms and rambunctious benches, roller derby may seem a bit intimidating to the uninitiated or unathletic. But anyone, big or small, is welcome to strap on skates and give it a go.

“Roller derby is a really welcoming sport,” the deliverer of separated shoulders and cracked ribs says. In fact, the veteran of Steel City Roller Derby, Pittsburgh’s derby league since 2006, is so tough, a teammate lamented that “I hit her, and I broke.” The league’s main team is known as the Steel Hurtin’.

Known as Jen Booth in civilian life, Bonecrusher got interested in the sport by watching a reality show that featured roller derby. A bout matches two teams, each with four blockers and a jammer, all on skates. The two teams’ blockers attempt to clear a path for their jammer (while holding off the other team’s). Points are awarded depending on how many opposing players the jammer passes.

“I didn’t like the reality show,” Booth says. “But I liked the action.”

After seeing an ad on Craigslist seeking female derby skaters, she decided to give it a shot.

“I figured it would be a good story about some creep, or I’d play roller derby,” Booth says.

She went to a tryout at the Romp n’ Roll skating rink in Glenshaw and fell in love with the sport. The next step was to pick a new persona. Booth decided on Bonecrusher, which was both the name of her favorite Transformer and her favorite hip-hop artist.

Chelly Johnson, a.k.a. Captain Crash, participated for four years while a student at Chatham University. She is now working on a thesis on roller derby’s effects on its players. Johnson says an on-skate alias is crucial for any derby player.

That new face — taken more literally by some with the application of glitter and paint — helps the players liberate themselves from society’s stereotypical views on female behavior. That’s part of what drew the Steel Hurtin’s current co-captain, The Kraken, to derby.

“There are very few areas of society were female aggression is embraced in this way,” she says.

And while a battering may leave a player with a few bruises — or “derby kisses” — The Kraken says she never takes personal offense. In fact, she takes a big hit as encouragement.

“If someone plays hard against you, you’re a threat to them,” she says. “It’s a compliment.”

That’s what Johnson sees in derby — a place to be free from all of the cultural stigmas surrounding women.

“[Society] is trying to tear down women’s bodies, but in roller derby, it is about seeing what it can do,” she says. “This is a sport where your body is valuable for what it is.”