Pittsburgh’s Seedy Players releasing new EP, The Time in Between

“My goal is to write digestible pop music with influences in jazz.”

Dan Styslinger’s name is becoming synonymous with solid pop music. As a guitarist in the band delicious pastries, he adds to that band’s orchestral psychedelic hooks. But as the keyboardist/songwriter/vocalist in Seedy Players, he gets to present something even further afield — closer to chamber pop, complete with a horn section and the occasional string arrangement. The music feels familiar, but the way those components blend gives them a unique sound.

As a child, Styslinger was already absorbing music. “My parents listened to a lot of jazz and musicals,” he says. “So from a very early age, I remember trying to pick out the notes of complex harmonies in jazz chords.” As a teenager, he started developing his own musical identity, listening to Ben Folds and The Shins. During college he heard Steely Dan, which really set him on track. “My goal is to write digestible pop music with influences in jazz,” he says.

Seedy Players present all of this on their new EP, The Time in Between. In “Radio,” Styslinger’s voice comes off like a whisper that still sounds crisp, as if he sang just millimeters from the microphone. On other songs, the vocals are on even ground with the band. “Thinking of Penelope” finds the two saxophones and a trumpet wailing between lyrics, in something of a shout straight out of a jazz tune. The five tracks don’t reveal everything on the first listen, but they create a desire for return visits, to discover all the layers built into the songs.

The group came together in 2015, originally calling itself Old Soles and Seedy Players. The Time in Between introduces the abbreviated name because the original “became a mouthful and [I] ended up having to explain it too much,” Styslinger says. “I have always been drawn to word play, and I thought it was kind of funny that Seedy Players sounds like ‘CD players.’ Plus, I think Seedy Players fits our vibe very well. Look at us, we’re a pretty ragtag group of sketchy dudes.” 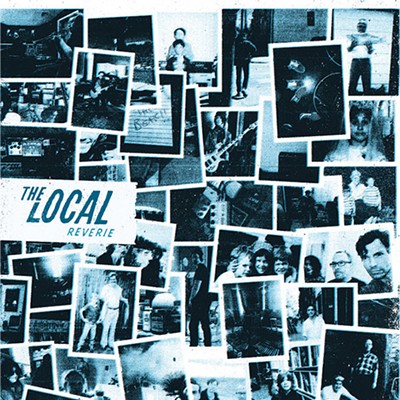