Despite delays and hiccups, the Lawrenceville owners remain hopeful 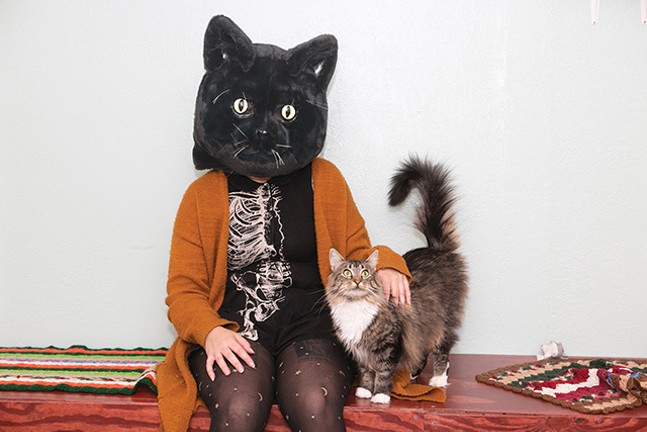 Superstitious folks would call it the luck of the black cat.

Only, it wasn’t entirely accurate.

As the first article came out, Black Cat cofounder/owner Indigo Baloch was wearing a gigantic black cat head in the front of the Butler Street shop, posing for a photograph for this week’s Pittsburgh City Paper cover.

At the back of the shop, inside a clean, playful room filled with benches, cat toys, and colorful blankets, two guests were visible through the window, laughing as they spent time with adoptable cats Remus, Ariana, Petunia, and Fleur.

The two owners, Baloch and Olivia Ciotoli, took to social media that evening, claiming the articles were a mistake.

“The Black Cat Market is able to remain open; however, food cannot be served at this establishment until it obtains a valid permit and meets all requirements of a food facility,” Ryan Scarpino, Public Health Information Officer for the county’s health department emailed City Paper the next morning.

Baloch says the health department never told them they needed to close, only that they can no longer sell baked goods until they submit additional paperwork and install a mop sink. The Tribune-Review posted a clarification on Friday.

At the time of our visit, a small cooler behind the counter contained canned coffees and bottled teas, but no food or fresh-made coffee was available.

Black Cat hopes to start selling baked goods again in a few weeks. In the meantime, it will keep regular hours for cat visits, shopping, and events.

(The previous supplier of the baked goods, home-based Good Chroma Bakery, was also listed as being shut down in the same article for not having a health permit. The bakery confirmed on its Facebook page that it is now closed.)

Baloch is gentle with the adoptable cats in the back room. She coos quietly, trying to coax out Remus, five years old and the market’s first black cat, but he’s shy and only comes out for a few seconds. Having him sit for a photograph is impossible. The three other cats in the room rub up against her legs affectionately, trying to get her attention.

She’s good with them. Makes sure to pet each of them equally.

She says many people who come in are excited to show her photos of their own cats, and then apologize for bothering her. “I always say, ‘Show me more! Show me videos!’”

When she closes the cat room door and moves to the front of the shop, Baloch is emotional about the journey opening the shop has been so far.

“We’re just two punk cat ladies,” she says from behind the counter. Cat mugs and decorations sit beside the cash register in front of her, with more items for sale on a nearby shelf: a black cat candle holder, a black cat peeking out of a ceramic pumpkin planter.

She says the two of them first met while booking punk shows, and got along so well they opened DIY music venue Venus Fly Trap together.

In 2016, Ciotoli told City Paper they just joked about opening a cat café at first. “Then we [thought], ‘Wait, no, we could actually do this.’ So we started working on a business plan.”

Baloch spent time researching cat cafés in Japan. And the name? Both women are fans of black cats. “Statistics show black cats are less likely to be adopted,” Baloch says. “We wanted to fight the superstition that black cats are bad luck.”

Their own luck so far, however, hasn’t been the best.

Two months after opening, neither are taking a salary. “We’re putting any profits back into the business,” Baloch says.

Securing the permit to sell baked goods is just the first step. To have the café fully operational as they first planned, she says they’ll need a minimum of $20,000 to make necessary renovations to the site in order to qualify for a food assembly permit. They have an espresso machine ready to go, but that price doesn’t include the cost it’ll take for installation.

She also says loans are difficult because their business is so new.

A Kickstarter raised over $20,000 in just one month back in 2016, and the two women originally planned for a fall 2016 opening, but it took two years to finally open. Since then, The Colony Café opened in the Strip District last year, beating them as the first official cat café in town. One update on their Kickstarter page said they had a location originally planned for Aspinwall, but it fell through.

Baloch, however, seems determined to succeed. It was really important for them to be women in the heavily male-dominated punk scene, and she wants to have a shop that also is inclusive.

Their hearts, she says, are in event planning. Black Cat displays artwork from local femme and non-binary artists on its walls. They plan on having an art opening for each new artist who hangs their work in the shop and don’t plan on taking any commission from artwork sold.

“We’re not pay-to-play people,” Baloch says. “We’re artists ourselves, and we know how much that sucks.”

They recently held a Halloween pop-up and art show; upcoming events include a poetry reading, book launch, and a Spooky Game Night.

It hasn’t all been unlucky.


Black Cat’s first two foster cats got adopted together by a guest who met them in the market earlier this month. A few days later, the four new residents were brought in by Frankie’s Friends Cat Rescue in New Kensington. Guests can pay $4 per person to hang out with the cats for 30 minutes.

“We have had a great experience with them so far,” Katie Smith, Frankie’s Friends outreach manager tells City Paper.

Ohio artist Vanessa Port, who held an exhibit of her “Veepdoodles” black cat art in the market this past weekend, also said working with the two women was “really smooth and easy.” Port donated $250 of the proceeds from her show to Frankie’s Friends.

Will luck return to The Black Cat Market? National Black Cat Day is this Saturday, after all. Baloch is hopeful. “We’re just doing our best to pull together the funds as soon as possible.”