Pittsburgh’s restaurant workers say they are bearing all the brunt of the region’s coronavirus spike, but are seeing little benefits | Coronavirus | Pittsburgh | Pittsburgh City Paper

Pittsburgh’s restaurant workers say they are bearing all the brunt of the region’s coronavirus spike, but are seeing little benefits 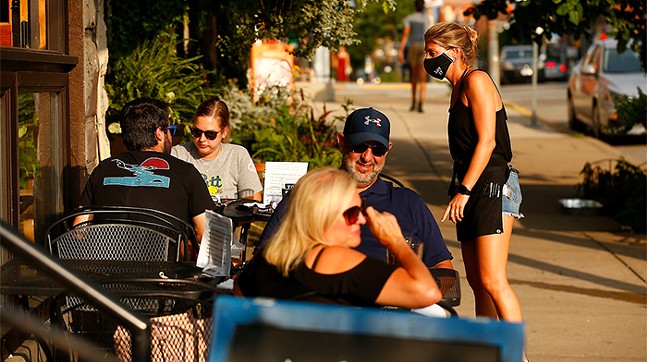 CP Photo: Jared Wickerham
Alexa Namestnik waits on tables outside of Lot 17 in Bloomfield on Tue., July 21.
The pressure to keep restaurants open in Allegheny County has been immense. Even as restaurants and bars have been one of the driving forces of the June and July coronavirus spike, restaurant owners protested to reopen their establishments, conservative politicians have lobbied on their behalf, and indoor dining restrictions were lifted as the county still sees triple-digit new COVID-19 cases each day.

The industry has been hammered economically. According to the Wall Street Journal, 570 restaurants have permanently closed in Pennsylvania as a result of the pandemic. Allegheny County hasn’t been immune with many restaurants also closing their doors, including longtime favorites like Alexander's in Bloomfield and Shiloh Grill in Mount Washington. It’s understandable why many owners and market-driven politicians are clamoring to let restaurants “get back to normal.”

But the people on the frontlines of this industry, the ones that are literally risking their health to pour water, cook meals, and serve plates of food tableside, don’t feel the same as their bosses.

Pittsburgh City Paper talked to four different restaurant workers who spoke about their experiences working during the pandemic. They don’t speak for every worker, and there are clearly some servers, cooks, and bussers who want to reopen too. But the servers CP spoke to said many of their coworkers feel the same as they do, and that restaurants shouldn’t have reopened for indoor dining. They also said that there is little incentive to go to work for minimum wage when tips are low, that significant percentages of employees ignore requests to wear masks, and that they feel vulnerable as their coworkers test positive for coronavirus while the owners continue to rush to reopen their establishments.

With the additional amounts of unemployment benefits ending this week, restaurant workers in Allegheny County and across the country are faced with a precarious choice: go to work at locations linked to coronavirus spikes or face little government support while unemployed.

Larisa Mednis quit her server job at Soba on July 1, rather than go back to work at the pan-Asian restaurant in Shadyside, which was set to reopen the next day. An employee at Soba tested positive for coronavirus on June 30, according to Mednis. Soba closed on June 30, but opened back up two days later for outdoor dining service. Mednis, who also worked the host stand regularly, had already put in her two-weeks notice because she says the environment of working in a restaurant during the pandemic felt too uncomfortable. But she was still scheduled to work on July 2. She says leadership at big Burrito Group, which owns Soba, never told employees exactly who tested positive, just that this employee’s last day working at the restaurant was June 24. Since Mednis worked that day, and wasn’t told to get tested by management, she thought it was too risky to return to work. When Allegheny County moved into the green phase of Pennsylvania’s reopen plan on June 5, many big Burrito restaurants reopened for indoor and outdoor dining, with capacity limits. Soba opened on June 8, and Mednis says during these three weeks before it closed down again briefly after the employee tested positive for COVID-19, the restaurant usually had 16-23 employees working in the large space.

But Mednis says there were many instances when front of house staff were confined to close quarters for periods of time, including relegated to a three-foot-wide servers’ alley in between serving customers. She says while the customers were given space to social distance at tables, that same space was not given to employees.

But she believes the restaurant group should have tested all employees that worked on June 24, the last day the employee who tested positive for coronavirus worked.

CP Photo: Jared Wickerham
Coleman Bates, a waiter at Nicky's Thai in Downtown, delivers waters to a table outside on Fri., July 24.
Benson and Mednis say workers were not tested before Soba reopened on July 2. The next day, all restaurants in Allegheny County were closed to indoor and outdoor dining for one week as a way to stem a new spike in coronavirus cases. Since July 3, new daily cases have regularly reached more than 100, and for several days, cases have been over 200 a day. Before July, Allegheny County never saw a day with new daily cases over 100. County officials have said contact tracing has shown the visits to bars and restaurants, as well as people traveling in and out of the state, were the main drivers to July’s coronavirus spike.

Benson adds that employees at Soba are paid the tipped minimum wage in Pennsylvania, which is $2.83 an hour. She says workers were told that after furloughs brought on by mandatory restaurant closures earlier in the pandemic, employees would have to return to work or big Burrito could consider that a resignation, which would disqualify them for unemployment benefits.

“I don’t have a stake in the restaurant industry,” says Benson, noting she will be OK economically without her Soba job. “My concern is for who this is their full-time livelihood.”

In June, after an employee at Spork Pit in Garfield tested positive for coronavirus shortly after reopening to indoor dining, a worker at its sister restaurant, Spork, felt the situation was emblematic of the problems of restaurants being too eager to serve dine-in customers again.

“I think it was too soon to open up to indoor dining and indoor bars,” says the employee who spoke to CP on condition of anonymity. “I think it is irresponsible.”

Mednis also says most customers have been courteous, but the pandemic has slightly increased the amount of more entitled customers visiting Soba, like those who refuse to wear masks or ignore server’s requests for social distancing.

She says the whole situation led her to believe that owners, some customers, and government officials value restaurants being open more than the safety of restaurant workers.

A protest was held in July in Downtown, where a group of restaurant owners and workers called for bar and on-site alcohol consumption restrictions to be lifted. The organizer of that protest did not attend because one of his employees tested positive for COVID-19 the day before, and he was awaiting test results.

“I understand that the industry is in a precarious position, but that burden should not be on a person making $2.83 an hour,” says Mednis. 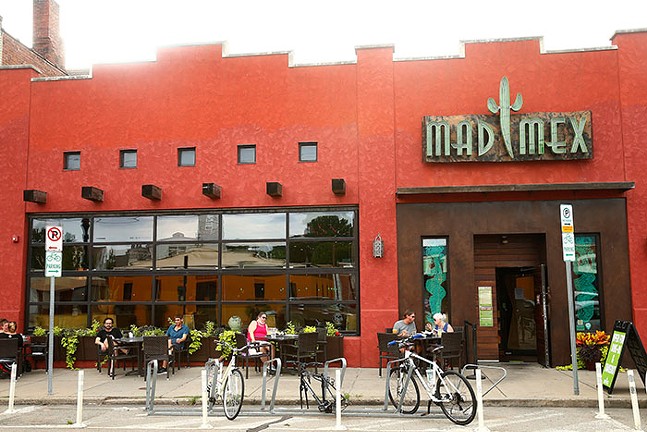 CP Photo: Jared Wickerham
Patrons dine outside of Mad Mex in Shadyside Tue., July 21.
Bill Fuller, president of big Burrito Group, says his company acted carefully and appropriately. He says he asked the Allegheny County Health Department about testing everyone at Soba, but the health department “cautioned against mass undirected testing to avoid overwhelming the labs.” He says ACHD says they would take care of contact tracing for the case.

“Also, per the ACHD, upon confirmation of a positive result, we shuttered the restaurant for 24 hours and sanitized the entire facility,” says Fuller. “We hired a professional firm licensed in this type of cleaning and remained closed for two days afterwards.”

Fuller rejects the idea that big Burrito is putting the company’s profits ahead of worker safety. He says the company has followed all county, state, and federal guidelines. He notes that all big Burrito employees undergo wellness screenings every day at work, which includes checks for elevated temperature and other COVID-19 symptoms.

“At no time were decisions made to put revenue gained from customers above the health and safety of employees,” says Fuller.

However, Fuller does admit that the big Burrito Group, and other restaurant owners, have been under harsh economic conditions during the pandemic. The company sought and received a federal PPP loan, and when the county announced that indoor dining must adhere to a 25% capacity limit, Fuller cited it as the reason all of big Burrito specialty restaurants, which includes Soba, would indefinitely close.

(All of big Burrito’s Mad Mex restaurants are still open, and two of those locations were included in ACHD’s first round of COVID-19 Assessment Reports and both locations received 100% satisfactory assessments.)

But an employee at Casbah who spoke to CP on the condition of anonymity, says they also feel the restaurant group is valuing revenue over worker safety. Casbah also closed indefinitely since it is a big Burrito specialty restaurant, but this worker worked there the few weeks in June and July when it was open.

They describe a similar environment to Soba, in that workers were crammed into a small server station when not helping customers, and fears over interacting with customers who don’t wear masks while dining, and some who exhibit low regard for social distancing guidelines.

“It feels really really classist, that their enjoyment is valued higher than our lives," says the Casbah employee.

Bobbi Linskens, an organizer for the Restaurant Opportunities Center in Pittsburgh, says the labor group has heard numerous stories similar to the experiences of the big Burrito employees.

“We have also found that when we have tried to help those restaurant workers organize for safer conditions and/or better compensation and benefits for risking their lives, many restaurant owners are using the pandemic as cover to retaliate against the workers,” says Linskens.

Not all restaurants are just doing the bare minimum required by the county health department when confronted with COVID-19 cases. When Spork Pit’s employee tested positive in June, which was followed by an employee at its sister restaurant Spork also testing positive, ownership paid to get everyone tested. All other employees tested negative, but the restaurant decided to close indefinitely on July 2. It has since announced reopening, but only for takeout.

“What are these things that we can do to catch the most COVID cases, without shutting down entirely?” Spork owner Andy Tepper told CP in early July, referencing the balance of trying to maintain the restaurants while also not contributing to coronavirus spread.

A worker who currently serves at a restaurant in Lawrenceville, who spoke to CP on the condition of anonymity, says the pressure to serve dine-in customers during a coronavirus spike has made them question if they want to remain in the industry altogether, despite loving the job.

The worker says they feel bad for the family who owns their restaurant, and knows they are struggling to keep the place open. But says the government policy has been too focused on restaurants being opened, and not enough about helping small-business owners and workers directly.

“I think the government is so concerned with the economy, but not the workers,” says the Lawrenceville restaurant employee. “You can support the restaurant without coming in and putting us at risk. I love this job; I drink wine and get to make cocktails. But this pandemic has made me realize that people don’t really care about us.”