Pittsburgh’s People of the Year 2020: Music

The Pittsburgh Symphony Orchestra found a way to shine, coming up with creative ways to bring music into people’s homes 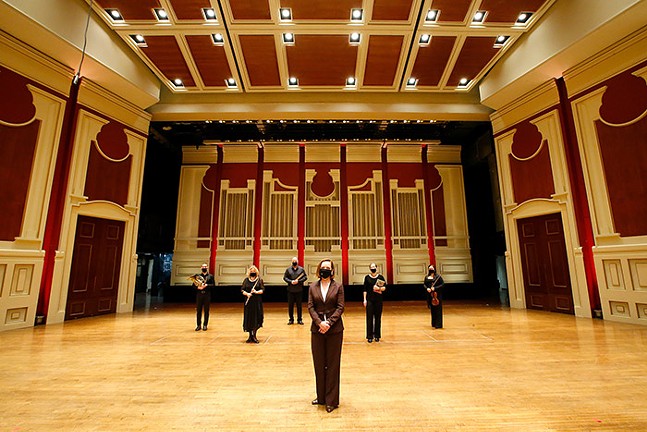 CP Photo: Jared Wickerham
Members of the Pittsburgh Symphony Orchestra on stage at Heinz Hall, from l-r: Mark Houghton, horn; Lorna McGhee, principal flute; Andrew Reamer, principal percussion; Melia Tourangeau, president and CEO; Lisa Gedris, librarian; and, Irene Cheng, violin
As venues shut down across the city during one of the most difficult years in recent memory, the Pittsburgh Symphony Orchestra found a way to shine, coming up with creative ways to bring music into people’s homes. Soon after the stay-at-home order began in spring, the PSO began posting intimate daily videos, self-produced by its musicians from inside their homes. Some were beautiful performances, others included tips for music students. Sometimes, music director Manfred Honeck would host a program from his home in Austria. In July, as part of the Allegheny County Parks Summer Concert Series, the PSO put on masks and performed a concert aired on local TV and streamed on YouTube, since they were unable to perform before a live audience. In August, the PSO partnered with 13 other local arts and culture organizations to produce a video featuring their music, encouraging the public to “#MaskUp.” This fall, they revamped their season into Front Row: The PSO Virtual Experience, a series of creative at-home events featuring not only performances, but behind-the-scenes interviews with the musicians. When the symphony is finally back on stage and performing before a live audience again, fans will surely remember the ensemble’s personal touches this year.

Latest in Pittsburgh’s People of the Year