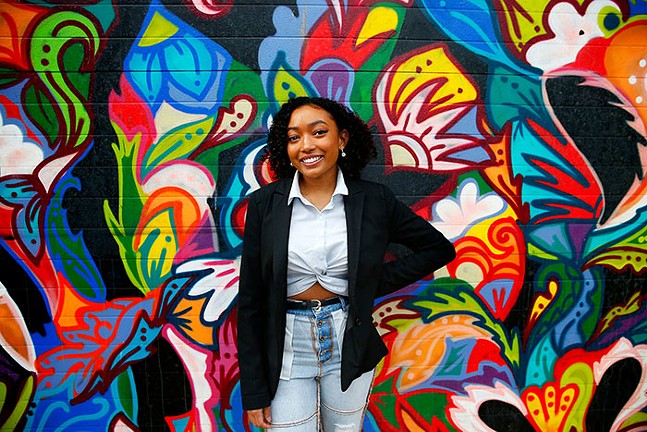 CP Photo: Jared Wickerham
@blackowned.pgh founder Kyley Coleman
During the continued reckoning against racist police violence this summer, something else started to happen. Anger spread further, and racism in businesses, publications, and other arenas was also called out. There were also calls to support more Black businesses, which is partially what inspired college student Kyley Coleman in May to create the Instagram account @blackowned.pgh as a resource to highlight everything from yoga studios to ice cream shops with Black owners. Since its creation, the account has amassed over 20,000 followers and has had a lasting impact on the community. Mo Rabinovitz, owner of Curated Flame, told Pittsburgh City Paper in October that his Millvale business was boosted after being featured by Black Owned PGH in July, with customers still coming in months later. While the pandemic has thrown a hitch in everyone's plans, Coleman still hopes to expand Black Owned PGH. This summer, she organized a pop-up marketplace in Homewood, with 50 Black-owned businesses and performances from Black artists. In July, Coleman told City Paper she was hoping to turn Black Owned PGH into a website and an app. Ultimately, as the Instagram account's description says, it's a project to help "work towards economic equity for the Black community."

Latest in Pittsburgh’s People of the Year